You’ll Never Guess What These Dogs Were Originally Bred For 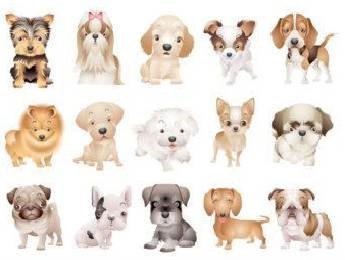 We know them as our best friends, our confidants, and those goofy creatures in YouTube videos according to definition.org. But man’s best friend wasn’t always meant for cuddles and viral videos. What dogs were bred for originally varied, sometimes even depending on the needs of one specific person. You’d be surprised to find that your lovable Fido was actually meant to hunt lions or guard temples.

But whatever the reason, dogs and humans have had a special bond going back centuries, and there is a reason we’ve kept them around so long, even after their utility purposes diminished. They remain the same loyal and loving creatures today as they were then, and we wouldn’t have it any other way.

So click through and discover a little bit about the histories of our best friends. You may be surprised what dogs were bred for. Don’t forget to SHARE this info with your friends!

1. Dalmatian - We all know them as firehouse dogs, but this lovable and unique breed did so much more than just ride beside firefighters on the way to the fire. Dalmatians used to trot along side horse-drawn carriages, guarding them when their masters were away. Their great stamina eventually enabled them to land jobs with fire departments, following the carriages to the fire and comforting the scared horses and victims. Their loud barks were also valued as it helped clear the way for carriages.

2. Yorkshire Terrier - It’s hard to imagine these little guys as anything but accessories for celebrities, but they actually were bred to chase away rats for Scottish weavers and miners. They were also used for a blood sport called rat-baiting where rats were placed in enclosed areas and a terrier was brought in to see how long it took to kill them.

3. The Newfoundland Dog - These fluffy, gentle giants are particularly good swimmers. They were bred to have thick coats to protect them from icy waters and a strong lung capacity for carrying drowning victims ashore. They were used to rescue people from shipwrecks and are still used as water rescue dogs today.

5. Corgi -They may not look like they can run real fast with their short, stubby legs, but the Corgi was actually bred for its great herding ability. These guys are experts at agility and have great speed. They have herded sheep, cattle, ducks, and geese.

6. Dachshund -The Dachshund is probably the most peculiar shaped dog there is. You can’t help but think, no way nature made this on its own. And that’s exactly right. These sausage-links were bred to hunt burrowing animals like badgers. Their long, lean bodies are able to fit into small holes.

7. Poodles - We think of them as high-class dogs owned by the  sophisticated elite. But actually, Poodles were bred to get down and dirty, often splashing around in ponds and puddles. They originated in Germany where it was known as  Pudelhund. Pudel is cognate with the English word “puddle” and hund means dog in German, effectively, Puddledog. They were named this because of their jobs as retrievers of birds that were shot down in ponds and bogs. They get their signature haircuts for the same reason. Hunters realized their coats would get too heavy in the water, so they shaved them in areas where they wouldn’t need as much warmth.

8. Bichon Frise - These little cloud muffins had quite the role during the 14th century. Unlike most breeds that were used for utility purposes, these guys were bred to keep sailors company on ships. Once they reached their destinations, Bichons were used for bartering. They quickly became favorites among nobility because they are perfect lap dogs.

9. Saint Bernard - The Saint Bernard has a long, noble history. They were bred by monks at a hospice in the Swiss Alps called the Great Saint Bernard Pass. The dogs were used to rescue travelers who got lost in the snow. The most famous Saint Bernard was a dog called Barry, who is estimated to have saved between 40-100 lives.

It is stated that the monks did not train the dogs in rescue, but rather they learned from older dogs. The breed fell out of favor for rescues when they were bred with Newfoundlands and developed long hair coats that weighed them down in the snow. However, the monks still keep Saint Bernards around for tradition and sentimental reasons.

10. Doberman Pinscher - The Doberman Pinscher was developed by Karl Friedrich Louis Dobermann, a tax collector from Germany, who decided he needed extra protection to perform his dangerous job of collecting taxes in the early 1900s. The breed quickly became favored for their strength, loyalty, and speed. During WWII, the United States Marine Corps made the breed their official war dog.

Today, they can be wonderful family dogs if trained properly and have natural floppy ears. To achieve the Doberman look, their ears must be cropped.

11. Portugese Water Dog - You can probably guess what this hairy little guy was meant for. Yup, water.

The Portugese Water Dog was bred in Portugal where they were taught to herd fish into fishermen’s nets, fetch broken nets or lost tackle, and serve as messengers from ship to ship or ship to shore.

These pups are also one of the rarer breeds, with only 36 entering in Britain’s Crufts competition in 2013.  However, this breed was represented in the White House by Bo and Sunny, the Obama’s family dogs.

12. Airedale Terrier - These dogs have a surprisingly long history and many uses. They were used in WWI to carry messages to soldiers behind enemy lines and deliver mail. There many tales of heroism regarding Airedales. They were also used by the Red Cross to find wounded soldiers. Before police enforcement mainly used German Shepard Dogs, Airedales frequently filled the role. They were also used to hunt mountain lions, bears, and wolves. Two Airedales were also among some of the victims of the Titanic.

Today, these pooches are used as therapy dogs in nursing homes and hospices.

13. Xoloitzcuintli (Mexican Hairless Dog) - Guarantee you’ve never heard of this dog, but they actually have one of the most interesting histories of any breed.

Xoloitzcuintli, known as Mexican Hairless Dogs in English speaking countries, are over 3,500 years old, but were only recognized as a breed in 2010. Their remains have been found in Mayan, Aztec, Zapotec, and Colima tombs. They also accompanied humans on their first journeys across the Bering Strait.

Indigenous people believed that the Xolo would protect a home from evil spirits and intruders and prized them for their mystical powers. They had a reputation as healers. Their warm bodies were used to cure ailments like rheumatism, asthma, toothache and insomnia. This reputation persists even to this day.

14. Bullmastiff - You might think these super giant dogs were bred for hunting bears or wolves or lions. But they were actually the idea of British groundskeepers. You see, when it was common to have large estates spanning acres and acres, it was also common to have intruders. Bullmastiffs were bred to patrol the grounds at night and prevent intruders from hunting illegally on the property. They were fearless and powerful and could keep a poacher detained until police arrived.

15. Bloodhound - Bloodhounds descend all the way from the middle ages, where they were used for hunting deer, wild boar, and tracking people. They get their name for their ability to track human blood.

Physician John Caius gave the most famous description of a bloodhound in the 16th century. He described their ability to track thieves and poachers by their foot scent and how they were used to patrol the Scottish boarders.

A scientist by the name of Robert Boyle once described how a Bloodhound tracked a man seven miles across a path frequented by people and found him upstairs in the room of a house.

Bloodhounds were also used to track runaway slaves during the civil war.

17. Pug - Pugs are commonly thought of as an all-American dog, but did you know they have their origins in China? They were frequently bred for ruling Chinese families. Highly valued by Emperors, Pugs were guarded by soldiers and kept in luxury accommodations.

Pugs eventually spread to Europe and were also prized by nobility there.

18. Akita - Akitas are native of Japan and are actually recognized as a separate breed from American Akitas. They are one of Japan’s oldest native dog and were bred to hunt wild boar, deer, and Asian black bears.

Most people have heard the famous story of Hachiko, an Akita in Japan that would accompany his master to and from the train every day. When his master suffered a fatal brain hemorrhage at work and didn’t show up, Hachiko spent the next nine years walking to and from the station hoping his master would return. A statue was erected of Hachiko at the Shibuya train station in his honor.