Where Did The Unicorn Myth Come From? 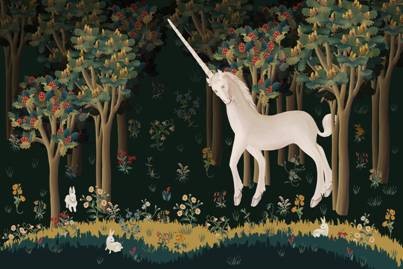 Unicorns are likely inspired by several real-life animals according to livescience.com.

The unicorn is one of the most famous mythical creatures, often depicted as a white horse with a spiraling horn erupting from its forehead. It's not hard to imagine a horse with a horn, and for much of the mythical creature's history, people thought it actually existed. But where did this myth come from?

Unicorn-like imagery dates back to the Indus Valley Civilization (about 3300 B.C. to 1300 B.C.) in South Asia, which included parts of modern-day Afghanistan, Pakistan and India. A side profile of what looks like a horse with a single horn appears on seals from that period. However, these images were likely depictions of aurochs (Bos primigenius), a now-extinct wild ox, according to the St Neots Museum in England.

Written Chinese descriptions of an Asian unicorn date as far back as around 2700 B.C., according to the American Museum of Natural History in New York. This "unicorn" seemed to be a combination of different animals and had the body of a deer, the tail of an ox, a multicolored or scaly dragon-like coat and a flesh-covered horn (or horns). Despite physical differences, Asian unicorns were described as evasive and solitary creatures, just as they were in later European records.

The first recorded mention of unicorns in Western literature came in the fourth century B.C. Ctesias, a doctor and historian, wrote down tales from Indian travelers and described horse-size "wild asses" with white bodies, blue eyes, red heads and a multicolored horn about 1.5 feet (0.5 meter) long, Time reported in 2008. Ctesias' unicorn was likely based on descriptions of multiple animals such as wild asses and Indian rhinos (Rhinoceros unicornis).

Mistranslations helped transform unicorns from confusing composite animals into majestic white creatures. In the third century B.C., scholars translating the Bible from Hebrew into Greek took the Hebrew word "re'em," likely the name for aurochs, and turned it into the Greek word "monokeros," which meant "one horn," which had been used for rhinos. The word later became "unicornus" in Latin translations of the Greek Bible and "unicorn" in English versions of the Latin, according to Merriam-Webster. The unicorn thus became a Biblical animal associated with Jesus Christ and purity.

Italian explorer Marco Polo found unicorn stories didn't quite match up to reality when he traveled through Asia and saw what he thought was a unicorn for the first time, in the 13th century — an account detailed in "The Travels of Marco Polo" (Penguin Classics, 1958). "They delight in living in mire and in mud," he wrote. "It is a hideous beast to look at, and in no way like what we think and say in our countries."

Polo described the creature as having a large, black horn; hair like a buffalo's; and feet like an elephant's. Today, it is widely accepted that the "unicorn" Polo saw was a rhinoceros, according to Brown University Library.

In the Middle Ages, sailors and merchants introduced narwhal (Monodon monoceros) tusks to European markets and sold them as "unicorn" horns, according to the AMNH. Narwhals are toothed whales from the Arctic. Male narwhals possess a projecting tooth 6.6 to 9.8 feet (2 to 3 m) long that resembles a horn, according to the University of Washington's Polar Science Center.

Europeans didn't have a consistent description of what unicorn horns should look like before narwhal tusks were traded. After the tusks arrived in medieval markets, unicorn horns were almost always described as being long, white and spiraled, just like narwhal tusks, according to the AMNH.

A 2004 study published in the European Journal of Archaeology noted that narwhals were largely unknown in Europe in the Middle Ages, although some people hunted them and acquired their tusks. "The unicorn is well known in medieval pictorial and written culture, particularly in the fourteenth and fifteenth centuries, whilst the absence of narwhals from western European art and thought is striking," the study's author wrote. While narwhals actually existed, most people hadn't heard of them, so the tusks helped reinforce tales of mythical unicorns, which weren't real but were commonly believed in.

The common belief among Europeans that unicorns actually existed waned by the 18th century, according to the St Neots Museum. After all, no one was able to find a real animal that matched the unicorn description.