The Hill of Crosses 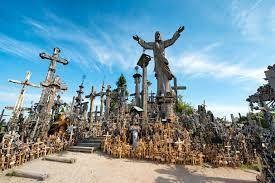 Sometime before 1850 people began leaving crosses on a small hill in northern Lithuania according to this article from natgeo.com. Those lost in brutal battles with Russia are among the earliest recorded commemorations there. Later, it was people not allowed cemetery burials due to religious persecution. Despite many attempts to have the site wiped off the face of the earth, the Hill of Crosses persists. Today there are hundreds of thousands of crosses, statues, relics, effigies, rosary beads and other tributes, all of which are said to rattle and chime in a unique cacophony on a windy day.

“The hill has many secrets. According to folklore, there was once a church where the hill now stands. During a terrible storm, lightning struck the church and the tempest buried it under sand and rock with everyone still inside.”

Kryziu Kalnas or Hill of Crosses is located 12kms (7.45mi) outside the city of Siauliai. The city itself was founded in 1236 and in the 14th century was home to Teutonic Knights. There are suggestions that the collection was initiated by the knights as a means of displaying defiance to outsiders encroaching on Lithuanian lands. Another legend holds that the Virgin Mary appeared to the people of Siauliai on the hill, asking them to show their religious dedication by filling it with crosses to mark the deaths of loved ones.

Lithuania suffered heavy human losses during the November Uprising of 1831 – a devastating battle against the might of the Russian Empire. With no body to bury, people began planting symbolic crosses on Jurgaičiai hill to honour the fallen. Then, with the imposing of religious restraints by Tsarist occupiers, Lithuanians were no longer permitted to bury loved ones in traditional graves. Erecting a cross on the hill became an alternative way to honour them.

It soon transformed into an important pilgrimage site where people would travel from all across the Baltic lands to mark someones passing or to pray for a miracle. But while it might have brought solace or hope to a mourner or pilgrim, visiting it came with the risk of being beaten, arrested or imprisoned by KGB agents.

In 1961 the Soviets bulldozed the site in an effort to suppress religion and all forms of its iconography. All the original crosses and icons were destroyed and the Soviets threatened to build a dam in the nearby river to flood the area. But when that didn’t happen the locals started to rebuild it. The Soviets destroyed it once more in 1972, spreading waste and sewage on the leveled land. But for every time that heavy Soviet machinery rolled in and decimated the sacred site, the defiant people of Siauliai would start the rebuilding process at the earliest opportunity. It had become a place of symbolic resistance as much as a site of Christian pilgrimage.

“For some people, the Hill of Crosses is a place of contemplation and prayer. For others, it symbolizes defiance and resistance in the darker times.”

By 1991 Lithuania had gained independence, and with it their religious freedom. The Hill of Crosses was no longer in danger of being desecrated and was subject to tens of thousands of new installations and millions of annual visitors. One such visitor was Pope John Paul II who visited Lithuania in 1993 and gave mass there.

The Hill of Crosses is one of the world’s most unique pilgrimage sites, an important symbol of national identity to the people of Lithuania and a place where people from all walks of life and religious demonimations come to pay their respect.

“The Hill of Crosses doesn’t really belong to anyone, and thus belongs to all. Neither church nor government has any claim to it, and people bring crosses here not because they are told to, but because they feel inspired to.”