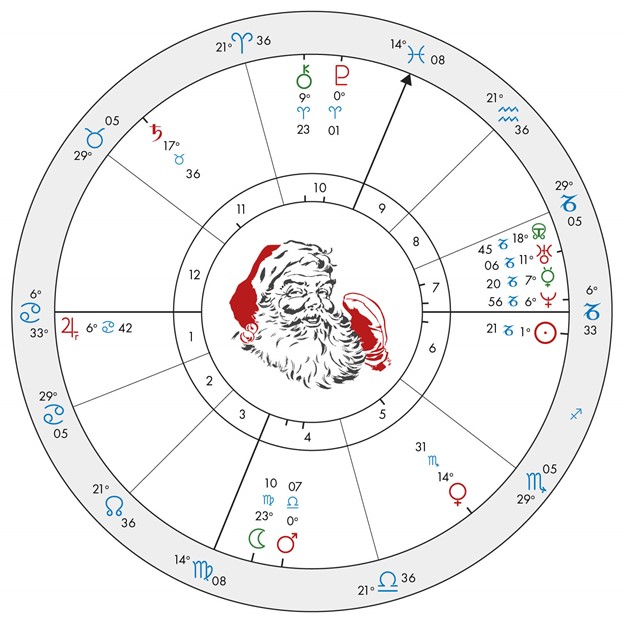 Santa is innocence and magic, all mixed together and then dressed in red according to lovetoknow.com. Red is the color of energy, strength, power, determination as well as passion, desire, and love. When was the modern Santa born? What would you imagine such a magical guy's birth chart would look like?

When Was the Modern Santa Born?

Clement Moore's poem The Night Before Christmas, which was originally titled A Visit From St Nicholas, is said to be largely responsible for our modern image of Santa. It was Moore's iconic poem that gave birth to a Santa who flies from house to house on Christmas eve in "a miniature sleigh" led by eight "flying reindeer." It was first published anonymously on December 23, 1823, in the Troy, New York, Sentinel. Santa is a Capricorn born on that date and in that place, but to have a complete, accurate chart you also need to know the time of birth.

The time of birth determines the rising sign. When the time of birth time is unknown astrologers use a very detailed process called chart rectification. However, with some "quick and imaginative" chart rectification, it seems likely that Santa was born when the planet Jupiter, often referred to as the "cosmic Santa Claus," was rising. Jupiter in Cancer was rising on the Asc at about 4:49 PM LMT.

The sign on the Ascendant, among other things, describes your body and appearance. Physically, those with Cancer rising have round-shaped features, are short to average in height, and have a shy innocence about them. This fits Moore's depiction of Santa as an elf who had "a broad face and a little round belly that shook when he laughed like a bowl full of Jelly."

Those born when Jupiter is rising on the Ascendant (ASC) are jovial, buoyant, adventurous, love to travel, are generous to others and have a larger-than-life persona. A "chubby and plump, right jolly old elf" who travels around the world in one night with a bundle of gifts "flung on his back" aptly describes Jupiter in Cancer rising.

The Sabian Symbols are metaphors that spark imagery. They were derived by clairvoyant Elsie Wheeler in 1925 at the request of astrologer Marc Edmund Jones to trigger his understanding of the 360 degrees of the zodiac. The Sabian Symbols add imagery and meaning that's specific to the degree of any planet or point in a horoscope. They are often used in chart interpretations and are a unique way to interpret Santa's chart.

The Sabian Symbol for Santa's Jupiter is 7° Cancer: "Two fairies dancing on a Moonlit Night. This imagery is of lightness, fun, and carefree joy; something that marvels and amuses. Santa can be envisioned as a mischievous elf with that flies through the air on "a moonlit night" bringing lightness, fun and carefree joy to the children of the world.

Santa Is a Major Capricorn

Santa's Sun, Mercury, Uranus, and Neptune are conjunct in Capricorn, on an angle, with the North Node also in Capricorn! That's a lot of Capricorn energy.

Capricorn, symbolized by the Sea Goat, is a dichotomy. The goat half of Capricorn's nature is direct and assertive, as well as steady, sure, practical and ambitious. The fish half of its nature is sensitive, creative, emotional, and intuitive. In the material world, Capricorn is about climbing the ladder of success. In the spiritual world, Capricorn is associated with ascension. Moore describes Santa's ascent when he writes: "laying his finger aside of his nose and giving a nod, up the chimney he rose; He sprang to his sleigh, to his team gave a whistle, And away they all flew like the down of a thistle."

Every year when the Sun enters Capricorn, the season of light begins, "Heaven's Gate" opens, and the darkness slowly begins to recede. During this time of the year, ancient cultures celebrated the Winter Solstice and gave thanks for the birth of the Sun. So, while Capricorn has the reputation of being as cold and dark as a winter night, Capricorn could actually be considered the "Bringer of Light."

Santa's Sun is at 1°20' Capricorn. The Symbol Capricorn 2° is "Three Stained-Glass Windows in a Gothic Church, One Is Damaged by Bombardment." This imagery suggests that Santa's work is to fix the broken window and restore faith and hope for a better world.

Santa's' Mercury is at 7°20' Capricorn. The Sabian for 8° Capricorn is "In a sunlit room domesticated birds sing happily." This Symbol's imagery is of Santa lighting up every home as he flies around the world, delivering his happy message of generosity and love to expectant children.

A Uranus/Neptune conjunction is a rare alignment that occurs every 168 years. Uranus and Neptune are generational planets that represent the loftiest and most inspiring experiences of humanity. They rule the two most humanitarian and idealistic signs of the zodiac (Aquarius and Pisces). Their conjunctions are very significant. Santa is a Universal Teacher:

Uranus' Symbol is, per Sabian Symbols, "A vailed prophet speaks, seized by the power of God." This imagery suggests that Santa is a teacher bestowing useful knowledge that has the power to inspire generations.

Neptune's Symbol is "An illustrated lecture on natural science reveals little know aspects of life." This imagery suggests that Santa is imparting lasting knowledge by setting an example.

Taken together the imagery is of Santa as a traveling evangelist who each year embarks on a spiritual journey to illustrate the power of giving selflessly to others.

In Evolutionary Astrology, the North node is called your soul's mission. The symbol for 19° Capricorn is "A child of about five carrying a huge shopping bag filled with groceries." This imagery suggests that Santa's mission in life was to carry a heavy load ("bundle of toys he had flung on his back"). As well as to shoulder responsibilities and help others.

Santa's Capricorn stellium indicates that he's a hardworking serious-minded man (Capricorn Sun/Mercury) who was born with an unorthodox approach (Uranus) to spirituality (Neptune). This also suggests that Santa is likely to be a creative genius with a wild imagination who will break with traditional religious and societal standards.

The modern Santa that's seen in ads and decorations and flies around the world on Christmas Eve bringing gifts to good little children is not a traditional religious figure or Symbol. He's a mixture of pre-Christian paganism and imaginative secular storytelling.

Santa's Capricorn four-planet Stellium is part a Cardinal Grand Cross that includes Pluto in Aries, Jupiter/Asc in Cancer, and Mars in Libra. The Sun, Mars, and Pluto are on the Aries points. A cardinal cross brings energies together that are conflicting and challenging, yet dynamic and motivating. This makes Santa action-oriented, and with the three planets on Aries points, Santa's prominence in society is emphasized.

With Pluto at 0°0' Aries in the 10th, Santa is a force to be reckoned with. He's an influential pioneer who can sway the public. The Symbol for 1° Aries is "A mermaid emerging from the ocean is embraced by a seal."

Mermaids are nature spirits who live in the sea. Numerous legends say the songs of the mermaids mesmerize others, other legends say mermaids only appear to the true of heart.
The Selkies of Scottish legends are shapeshifters who have the appearance of a seal but can mortiferous into human beings when coming on the shore.

The image of the mermaid and seal embracing brings to mind how the power of love can magically create metamorphosis.

Mars in Libra is the desire to please. Santa's Mars is at 0°06' Libra. The Symbol for 1° Libra is "A butterfly preserved and made perfect with a dart through it." This imagery is of a Santa who is perfect, ageless, and eternal.

Saturn in Taurus Opposite Venus in Scorpio

Here's where things get a bit less jolly and mystical. These planets opposite each other suggest that there was a lack of affection, comfort, and pleasure in young Santa's life. However, it could be that it was Santa's lonely childhood that set him on a path to restore other children's faith in magic.

Saturn is in at 17° 36' Taurus. The Symbol for 18° Taurus is "A woman airing an old bag through a sunny window to give it air and sunshine." This is an out with the old symbol, and its imagery suggests that Santa shook off the past and let air and light into his life.

Venus is at 14°31' Scorpio. The Symbol for 15° Scorpio is children playing around five mounds of sand." The imagery of this degree is about Santa realized the impermanence and the unpredictability of childhood and decided to make sure all good children had toys to play with on Christmas day.

Santa's Moon is 26°10' Virgo in the 4th house of home and family. The Sabian for 27° Virgo is "Aristocratic elderly ladies drinking afternoon tea in a wealthy home." This Sabian imagines a gathering with like-minded people sharing intimate thoughts and feelings on a mental and spiritual level. This is precisely what is done during Santa's season; families, friends, and even strangers come together in joy to celebrate the promise of a new day.

Santa, who has an extraordinary birth chart, is the spirit of Christmas. When he arrives every Christmas Eve, he's a reminder to both adults and children to retain their sense of childlike wonder and have faith that magical moments are possible.