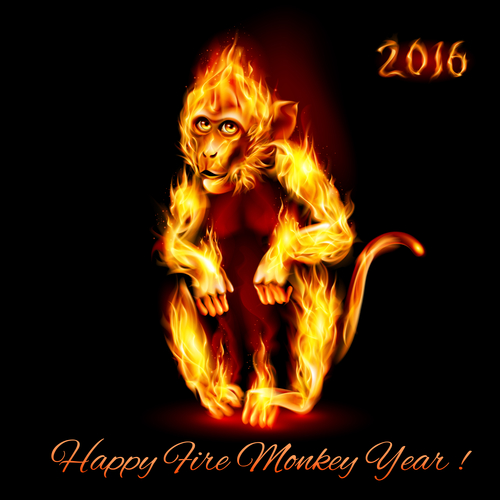 In this extensive article from astrologyclub.org we get amazing insight into the coming Year of the Red Fire Monkey for everyone.

Traditional Chinese: n this extensive article from astrologyclub.org we get amazing insight into the coming Year of the Red Fire Monkey for everyone.

The most common Chinese ways of saying Happy New Year are Gong Xi Fa Cai (Mandarin) and Gong Hey Fat Choy (Cantonese). Even though the pronunciations are a little different, both are written the same way.

Gong Xi is congratulations or respectfully wishing one joy.

Fa Cai is to become rich or to make money.

Thus, Gong Xi Fa Cai means wishing you to be prosperous in the coming year.

WELCOME TO THE YEAR OF THE MONKEY!
I am the seasoned traveler
Of the Labyrinth.
The genius of alacrity,
Wizard of the impossible.
My brilliance is yet unmatched
In its originality.
My heart’s filled with potent magic
That could cast a hundred spells.
I am put together
For mine own pleasure
I AM THE MONKEY.

The Chinese New Year of the Fire Monkey will start on February 8, 2016 – the second New Moon after the Solstice. Following 12 months of the dignified and surefooted Goat, the New Year of the Red Monkey is going shake, rattle and roll!

Forecasts For The Year Of The Monkey 2016

What lies in wait for you in the Year of the Monkey 2016-2017? Chinese Astrology has definite answers to this question. And, owing to its five thousand years of existence, its answers can prove to be astoundingly timely and accurate.

These horoscopes are based on Chinese Astrology of the purest tradition. They will not only tell you what may happen to you this year, but they will also give you pertinent advice so you can live a richer and more satisfactory life.

Monkey years draw their nature from the animal of the year. The Monkey is an intelligent, witty, and inventive animal. They are problem solvers, working with their group while simultaneously demonstrating an independence associated with achievers. The nimble monkey is playful, youthful in nature, and is a joy to watch as they move from activity to activity.

The monkey is one of the symbolical animals corresponding to or having affinity with the ninth of the Twelve Terrestrial Branches, called the “Shen” Branch, and symbolizes irrepressible curiosity and creative energy. Though worshipped to some extent by the Buddhists, the Monkey is commonly regarded as the emblem of trickery.

In the traditional Chinese mind, which is echoed in the annually-reprinted ancient almanac, the Monkey is very intelligent, hyperactive and strong-minded. He represents the unfettered mind freed from inhibitions and guilt. Relieving himself from the heavy burdens of a touchy conscience, the Monkey type will not hesitate to test his theories, experiment and think the unthinkable. In his domain, everything is possible. What is difficult, he could do right away; what is impossible may take a little longer.

All the animals have a shadow side, and the Monkey is no exception. The problem solving tendencies can turn the Monkey to being a tricky tactician, opportunistic and not all that trustworthy. The youthfulness hides an unscrupulous adolescent, and the independence can turn to unfaithfulness.

Some important people born in the Year of the Monkey

The positive and negative quality of the Monkey Year 2016 culminates in a year that anything can happen. There is little point in storing up goods or planning one’s life. The influence of the Monkey puts everything into flux. Things will get accomplished, but largely through personal and individual efforts. Group movements, such as political upheaval or revolutions, will not make a mark during this year.

This cheeky animal bursts with exuberance, bringing a lightning fast pace and fantastical motivation. The Monkey increases communication, humor and wit, helping us get through stressful times with grace and ease. Business flourishes and risks tend to pan out. The Monkey’s gift is the ability to find unconventional solutions to old problems. Daring to be different can lead to success.

Talk is fast and cheap though, so be on the alert for deceptions. With so much mental energy zapping around, everyone needs to re-think their fitness program, diet and health plan. If you don’t have one, you definitely need to instigate some form of regular physical activity this year. The body was designed to move! Honor it! Stress needs to be burned off by going to the gym, swimming, yoga, water aerobics, dance, martial arts, team sports, tennis or long walks. When was the last time you did any of these things?

Although a lively, optimistic and progressive year where finances, politics, and real estate should see an upturn, there will be a decided undercurrent of insecurity. Everyone wants to work the shrewdest angle, get the best deal, and win big. However, business decisions made this year should be based on fact, not emotion. Problems and chicanery abound, so nothing this year should be taken for granted, whether politically, financially, professionally, domestically or emotionally.

A particularly auspicious time for new inventions, the Year of the Monkey is for taking risks and being rebellious, a year where agile, inventive minds, sheer guts and bravado will win out. Now is the time of courage, action, anarchy, and true devotion to even the wildest of schemes, a time to start new endeavors, for they are destined to succeed under Monkey’s influence. But a word to the wise: those who can hang on for the wild ride, outsmart the confidence-trickster, and bluff their way through will come out unscathed. Those who are dull or slow witted, and can’t handle the stress will come unglued.

On the individual level, do go ahead with your life. Move forward, make strides, and stretch out for what may lay ahead. The Year Of The Monkey 2016 is a time for business considered as risky, and here the seeds of unplanned success lays. Run with ideas, embrace the inventive, and don’t look back.

Remember that this year will reward the individual effort and those who place their trust in the group collective will face disappointment.


Global Predictions for 2016, Year of the Fire Monkey

Nations that are created in the Year of the Monkey usually produce great minds. Even though the monkey is impatient and scattered brained, he has a whole lot of ingenious ideas in store.

A lot of global economic growth can be expected in the Year of the Monkey. Expect a lot of life changing inventions to be released. The key to success this year is education. This is not meant as mere college or graduate school but to take up courses that matter for your everyday life not just for your career or status. Don’t be too shy to take up silly little courses at your books shop or join those financial groups to help manage your money or start up a small business. The monkey is all about being creative and innovative with what you have.

The Year of the Monkey 2016 is a good year to break free and take calculated risks as there is nothing more powerful or rewarding than following your heart’s desire. The energies are supporting these changes.

Mr. Monkey can be menacing as he can easily overthrow old conventions that no longer work. This could mean toppling of old empires or iron fisted bosses. So just remember, bosses that have been taking advantage of this economic down turn may soon learn to regret it. All things find their balance eventually.


Chinese Horoscope 2016 Summary:  Is it a Good Year for you?

How will each Chinese Astrological sign fare in the year of the Monkey? The following delineations offer a brief guide. Remember, if you were born in the first two months after the Solstice (Capricorns and Aquarians) double check your Animal sign. The date for Chinese New Year fluctuates!

The almanac also states how people born under other signs will fare in the year of the Monkey. This is a generally auspicious year for Rats, Oxen, Dragons, Horses, Monkeys, Roosters and Dogs. This could be a difficult year for Tigers, Snakes, Dogs and Boars. Rabbits should beware their finances. Sheep should take care of their health.