The Galactic Center in Your Astrology Chart 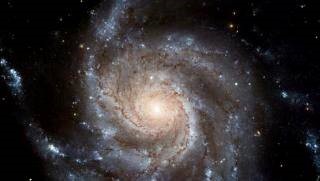 What is the Galactic Center and how does it relate to us on Earth?

The Galactic Center, which sits at the center of our Milky Way Galaxy, is the source of energetic particles that bathe the Earth according to living-astrology.com.

With the recent years of the Sun being fairly quiet and Earth’s magnetic field weakening a bit, these energetic particles (infrared and gamma particles) have been able to make their way into the Earth’s energy field.

These particles are thought to open up the sub-conscious mind, urging us to both release old emotional wounds and traumas and also to engage our New Paradigm roles. In fact, the Galactic Center acts as a transmitter of Divine Consciousness.

The Galactic Center sits at approximately 26-27 degrees of Sagittarius, which is a sign we know to be about FREEDOM and TRUTH. It follows from there then, that wherever it sits in an individual’s chart connects them to their FREEDOM and TRUTH.

Because it remains at the same degree of Sagittarius for most of our lives, our personal connection to it comes from the House (area of your life of which there are 12) we find it in your chart and the other planets and points that it interacts with.

When you are aligned with the cosmic forces of the Galactic Center, here is how the energy might show up in your Astrology chart by House:

The Galactic Center in your 1st House
* You personify the energy of Ascension and connect intuitively with the New Paradigm
*Carry deep knowledge that you are here to do something of importance
* Feel “ahead of your time” in your thinking, ideas, and concept of TRUTH
* Boldly step into patterns of light; embodies Unity-Oneness

The Galactic Center in your 2nd House
* You resonate with ideas of an alternate economy
* Sees income vs. job done as skewed, (i.e. “why do we pay our sports heroes so much and our teachers so little?)
* Have a sense that the value of “things” isn’t as important as the deeper values of relationship, oneness, inter-connectedness, love, peace

The Galactic Center in your 5th House
*Involved with helping our children who already embody a new paradigm in getting heard
* Creatively expresses their Will in ways that empower benevolence instead of greed
*Embodies the spirit of play and having fun; being passionate guilt-free
* Emboldened to take risks that are divinely guided

The Galactic Center in your 6th House
* Divine healers; intuitively guided to work holistically with people instead of just treating symptoms
* Creators of new systems of living organically in balance with Gaia
* Servers of the new paradigm – using intuitive guidance to know their roles in bringing in the light

The Galactic Center in your 7th House
* Ways of resolving conflicts peacefully in a spirit of cooperation, trust and unity
* All relationships based on honest sharing and communication
* Helps others see their relationships in the light
* Seeks balance and harmony
* Enacts win-win solutions to problems

The Galactic Center in your 8th House
* Powerful transformers – wherever they go, systems, people, old or unsustainable ideas or ways of being come under pressure to change or crumble in favor of  a new, profound Truth based on love, light
* See death as multi-dimensional and as a rite of passage
* Death is seen as a conscious choice
* Not afraid to expose untruths to the Light
* Sex is seen as a powerful union of two souls, not a power struggle

The Galactic Center in your 9th House
* Tuned in to Spirit/Source/God and acts as a clear receiver of divine information and impulses
* Citizen of the World, Cosmos, of Earth – not just one country
* Thinks globally/ universally
* Will be the first ones to interpret off-world communications
* Tuned in and tapped into Quantum energy field

The Galactic Center in your 10th House
* Stand in your own unique authority and work to help others connect to theirs
* Sacred Father energy coming into balance with Sacred Mother energy
* Sees time as part of a natural cycle – not just linearly
* Career/Profession choice based on what is TRUE for them, free of societal, cultural or familial constraints