Planets in Retrograde for 2022 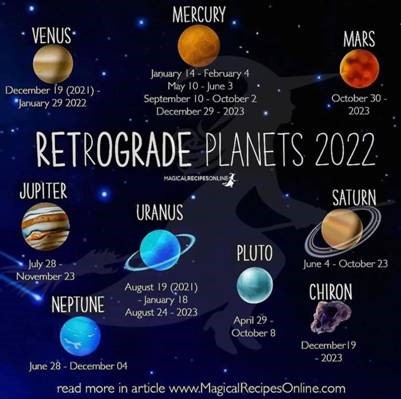 We are currently in the middle of 2022’s third Mercury retrograde of the year. If you thought one planet being in retrograde sounded like a tough pill to swallow, try six says this from McKinley Franklin in hercampus.com! Yes, I repeat, six planets are in retrograde in September 2022… and a seventh is about to be heading into retrograde at the end of October. I really wish I was joking. Seriously, universe, I could use a little bit of a break.

Learning that six planets were going through a retrograde phase honestly explains a lot of my life experiences lately. But, what does that actually even mean? What is retrograde, and what does it mean for six different planets to be in it? Get ready, because I’m going to dish out all things retrograde with special insight from intuitive astrologer Valerie Mesa and manifestation TikTok creator @e.mo.tions for their insight.

What even is retrograde?

When a planet enters a retrograde orbit, it simply means that they’re taking a mini hiatus, slowing down, and not working to their fullest potential. Mesa compares a planet being in retrograde to an employee simply being out of office for a period of time. A retrograde is a period of time where a planet doesn’t operate like it usually would, attributing to why things may feel a little off during a cycle.

Mesa also notes that retrogrades are the ideal times to revisit, rework, and reconsider the elements of our lives. @e.mo.tions, too, says that it’s totally normal to feel like things are out of place during a planetary retrograde, because things aren’t operating as they normally would.

What is the significance of six planets being in retrograde?

That means that you can take a big deep breath, and release yourself of the idea that things are getting out of hand right now just because six planets are in retrograde. However, the two retrogrades you’ll want to pay the most attention to are Mercury and the upcoming Mars retrograde. According to Mesa, the best thing to do right now is to not “jump to conclusions. Don’t make impulsive decisions because nothing is set in stone.”

Though the other varying retrogrades don’t hold as much significance as Mercury, it’s important to still understand what each retrograde means. Let's dive into the meaning behind Pluto, Saturn, Neptune, Jupiter, Uranus, and Mercury’s retrogrades.

Pluto has been in retrograde since April 29, and is going to close out on Oct. 8. Pluto is a planet ruled by the shadow self, encompassed by a set of daunting energies. Think about all the dark feelings that bubble up “under the surface” — deception, obsession, destruction. Pluto really does sound like an evil villain from one of my favorite Marvel movies.

For those of us that have deep-seated control issues (yes, my fellow Leos, I’m talking about us), this retrograde in Pluto may be difficult for you to deal with. You may be noticing an imbalance of power in varying degrees of your life. Pluto allows us to see what is hidden behind our conscious minds, and the planet also holds a great deal of transformative energy. Basically, you just need to let go and release all of those negative thoughts and fears that sometimes creep into your consciousness to make room for all the positives that are on your way.

Moving on to a less scary planet, we have Saturn. This planet is known for ruling our sense of structure, responsibilities, and commitments. To put it in simple terms, Saturn basically is like our best friend that communicates with tough love, always keeping us in check.

This Saturn retrograde spans from June 4 to Oct. 23, and it’s forcing us to take care of ourselves. Have you been feeling weary about a controlling partner, or overwhelmed with your intense academic workload? If there's any areas in your life that need improvement, this Saturn retrograde is going to expose them. Slow down, and analyze what you feel pulled to and connected with in this retrograde. Saturn is ruled by Capricorn, so it’s natural to work on and refocus one's ambitions during this retrograde.

Neptune dominates our dreams, intuitions, and imaginations — everything that we find deep passion for. This retrograde could be deemed as the biggest “burden” of them all, because as Mesa explains, it forces us to “take off our rose colored glasses, showing [aspects of life] where we’re more prone to be a little bit too dreamy." In this retrograde spanning from June 28 to Dec. 3, it’s easy to feel a lessened sense of the fantasy that usually radiates from Neptune.

Though this might sound somewhat alarming, Neptune’s retrograde has more positive implications than negative. As a planet that rules our passionate selves, it’s important to be open and receptive about what you need for your physical and spiritual health this Neptune retrograde.

From July 28 to Nov. 24, Jupiter retrograde is going to be influencing our abundance levels. That’s right, Jupiter is the planet that rules luck, fate, and abundance. With this planet in retrograde, it’s easy to get caught up in feelings of self-doubt and uncertainty for the future. You may have been wondering lately, why aren’t my manifestations manifesting right now?

It’s important to plan ahead for the future instead of focusing on what you don’t have in the physical present. As the planet that rules abundance, Jupiter retrograde is the perfect time to consider where we’re headed in our lives. It’s important to not get too greedy, and to be grateful for what you have in front of you while planning for the future (save that money, honey). Practice manifestations that emphasize gratitude, and for the love of the planets, stay out of the casino. Just take my word on it.

Another planet keeping those of us who crave control in check, Uranus retrograde evokes sudden change that hits everyone like a truck. Uranus is ruled by rebellion and breakthrough, and during retrograde, we find our lives shifting quickly and all at once. The Uranus retrograde commenced on Aug. 24 (RIP Leo season) and will end on Jan. 22, 2023, so keep an eye out for more change to come.

The thought of Uranus’ power scares me, but while in retrograde, it allows us to get everything back in place. During Uranus retrograde, it’s vital to take a look at our lives, and to truly examine the parts that we’re unhappy with. Mesa compares Uranus retrograde to the act of losing a job — things might seem shaky and uncertain, but we gain time to clarify where we see ourselves heading. Patience is key in this retrograde, and understanding that we can’t control everything is something we have to come to terms with (even if I really don’t want to).

Mercury retrograde in Libra and Virgo

Alright, we’ve made it to the dreaded Mercury retrograde. Having begun on Sept. 9, we can expect this Mercury retrograde to extend through Oct. 2, shifting between Libra to Virgo on Sept. 23. As the planet ruled by communication, one of Mercury retrograde's most noticeable qualities is the universal experience of shaky connections. It feels like everything is moving backwards instead of forwards, and we tend to harp on past relationships, unsolved issues, and just the past in general.

Let’s be frank; everyone is thinking about their exes at this time, which explains why mine unblocked me last week… awkward! This is a common theme that you’ll recognize during the Libra phase of the retrograde, but with a shift to Virgo, we’ll swiftly turn our reflections inwards. It’s important not to get too caught up in our past, and to remember that we left that phase of our lives behind for a reason. Prioritize personal trust and growth this Mercury retrograde.

What about the upcoming Mars retrograde?

Yes, it’s true, Mars will be shifting into retrograde on Oct. 30 through Jan. 12, 2023., and you’ll want to watch out for it. Mars is ruled by our desires, passions, and motivations, as Mesa referred to it “like the gas we put in our car.” The latest Mercury retrograde is the ruler of the upcoming Mars retrograde, so it’s safe to assume things are about to get a little hectic. An inevitable chaos may be impending future actions and productivity levels… so, yes, it’s more daunting than all the other retrogrades combined. I'm wishing everyone the best.