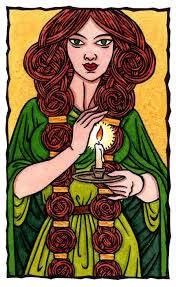 Imbolc is a pagan holiday celebrated from February 1 through sundown February 2 according to history.com. Based on a Celtic tradition, Imbolc was meant to mark the halfway point between winter solstice and the spring equinox in Neolithic Ireland and Scotland. The holiday is celebrated by Wiccans and other practitioners of neopagan or pagan-influenced religions. Imbolc is just one of several pre-Christian holidays highlighting some aspect of winter and sunlight, and heralding the change of seasons.

The celebration of Imbolc dates back to the pre-Christian era in the British Isles.

The earliest mentions of Imbolc in Irish literature date back to the 10th century. Poetry from that time relates the holiday to ewe’s milk, with the implication of purification.

It’s been speculated that this stems from the breeding cycle of sheep and the beginning of lactation. The holiday was traditionally aligned with the first day of spring and the idea of rebirth.

Imbolc celebrations took the form of a festival in honor of the pagan goddess Brigid, who was evoked in fertility rites and oversaw poetry, crafts and prophecy. Brigid was worshipped by the Filid, a class of poets and historians among the Celts of ancient Ireland and Britain.

Brigid was considered one of the most powerful Celtic gods, the daughter of the Dagda, the oldest god in the Celtic pantheon Tuatha du Danann. She had two sisters also named Brigid (though it’s speculated that these sisters are meant to symbolize different aspects of the same goddess.)


Brigid appears in the saga Cath Maige Tuired and the Lebor Gabála Érenn, a purported history of Ireland collected from various poems and texts in the 10th century.

Myths about Brigid’s birth say she was born with a flame in her head and drank the milk of a mystical cow from the spirit world. Brigid is credited with the very first keening, a traditional wailing for the dead practiced at funerals by Irish and Scottish women.

In pre-Christian times, Imbolc observance began the night before February 1. Celebrants prepared for a visit from Brigid into their homes by crafting an effigy of the goddess from bundles of oats and rushes. The effigy was placed in a dress and put in a basket overnight.

The day of Imbolc was celebrated by burning lamps and lighting bonfires in tribute to Brigid.

Over the centuries, Brigid was adopted into Christianity as St. Brigid.

One of Ireland’s three patron saints, the Catholic Church claims St. Brigid was a historical person, with accounts of her life written by monks dating back to the 8th century. Brigid (or Bridget) is the patron saint of Irish nuns, newborns, midwives, dairy maids and cattle.

Whether or not she existed, these stories contain aspects in common with the details of the pagan goddess and illustrate the transition from pagan to Christian worship.

Like the goddess Brigid, St. Brigid is associated with milk and fire. Born in Ireland around 453 A.D., St. Brigid was the daughter of a slave and a chieftain who was celebrated at an early age for her agricultural knowledge.


With no interest in marrying, Brigid’s goal was to create a monastery in Kildare, supposedly the former site of a shrine to the Celtic goddess of the same name. Brigid lived her entire life there.

She was renowned for her charity to the poor and stories abound about her healing powers. St. Brigid was a friend of St. Patrick, whose preaching set her on a course at an early age, and she became Ireland’s first nun.

St. Brigid is said to have died in 524 A.D. The remains of her skull and hand are claimed to be in the possession of churches in Portugal.

In the 12th century, legend holds that the nuns in Kildare attended to a fire built in St. Brigid’s honor. The fire had burned for 500 years and produced no ash, and only women were allowed in proximity of the fire.

The celebration of St. Brigid’s Day on February 1 was put in place by the church to replace Imbolc. On her feast day, an effigy of St. Brigid of Kildare is traditionally washed in the ocean and surrounded by candles to dry, and stalks of wheat are transformed into cross talismans known as Brigid crosses.

The modern celebration of Imbolc is considered a low-key, loose and sometimes private affair concerned with reconnecting with nature.

Since it’s a climate-specific holiday, some followers of the Wicca religion adjust their celebration of it to correspond with a date more appropriate to the coming of spring where they live. Others embrace the symbolism of the holiday and keep to the February 1 celebration.

The goddess Brigid is central to the celebration for modern Wiccans. In the tradition of the original Celtic festival, Wiccan groups that worship Brigid might include fire rituals on Imbolc.