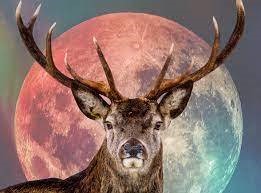 This can be a difficult place for the Moon because of this decan’s ambition to sit in the seat of power and being overly-impressed by those that already do. However the Moon in Capricorn 3 does not have the constancy needed for leadership and is often moody.

Instead, those touched by this Full Moon may be found fawning over and idolising authority figures. The Moon here can bring to the fore leaders who are very popular with the common people. Moon Capricorn 3 can make us extremely impressed by thrones and ‘A’ listers. Therefore we might be drawn to working very close to leaders and very popular influencers at this time.

This is a great Moon for doing very well as an advisor however, in this way we can ‘rule’ vicariously. We have to be careful we don’t pick the wrong leader to follow at this time, otherwise we could become the lap-dog to a very domineering and bullying superior. Orders have a tendency to be followed unquestioningly with the Moon in Capricorn decan 3!

Although loyalty is admirable it can be disastrous if misdirected. This Moon favours those who are very shrewd and clever, but the power behind the throne can be abused when it is not directly accountable. If you appoint someone as your ‘King’, it will be you who gets the comeback for advice given to this person, whether good or bad. Sometimes this behind the scenes dynamic can make those touched by this Full Moon seem quite shadowy and untrustworthy.

The tarot card associated with Capricorn Decan 3 is the four of pentacles. “Fear of scarcity is often related to The Four of Pentacles so you may worry unnecessarily about money if you have come from a background of poverty.  This leads you to hoard or penny-pinch, even when you have enough money.”

This card supports the general tenacity of the goat, nothing is thrown out if it can be renovated, and if something has to be binned it will be recycled or given to charity.

“The Four of Pentacles is a positive and welcome card for savings, investments or retirement plans. It indicates that you are accumulating goods, wealth and possibly even power.  Your financial situation has been steadfastly growing over a period of time (many lifetimes) but this is not by chance or even pure luck.” ~ teachmetarot.

“A person of high character can find the silver lining for every cloud and turn every setback into reward or opportunity… If we habituate ourselves to the need to win, then inevitably we will lose grace and wisdom; serene indifference to outcome is the highest attainment.” ~ jamesburgess.com

Sulaphat 21ş is from the Arabic As-Sulahfah which means “tortoise”. This refers to the tortoiseshell found by Hermes which he fashioned into a musical instrument. “Lyra is like Venus and Mercury. It is said to give a harmonious, poetical and developed nature, fond of music and apt in science and art, but inclined to theft.” Depending on what planet one has here it would indeed suggest musical ability, but also the ability to lie and cheat. Sulaphat is situated in the claws of the Vulture that is sometimes depicted in the illustrations of this constellation. The Vulture holds the harp.

Black Tourmaline is a must-have for anyone who works in the healing industry. It will benefit those who work with sick or mentally ill people, to prevent these people literally “sucking” the life out of you.

Shamans and healers have used black tourmaline since ancient times for protection. It is one of the few stones that protects and heals on all levels-physical, emotional, mental, and spiritual.

Black tourmaline will function like a black hole for you. Let it gobble up any surrounding nasty vibes and prevent negative people from preying on your energy.

If you have a particularly difficult boss to deal with, keep this crystal bodyguard in your pocket. Any bitterness and harsh words will simply bounce off you!