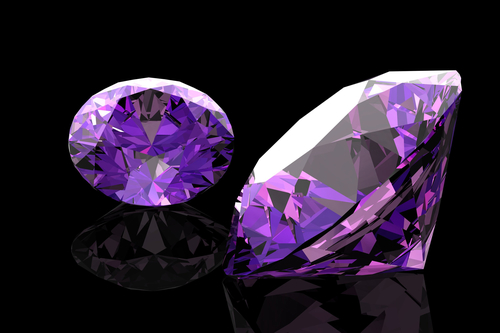 The Amethyst
The February born shall find
Sincerity and peace of mind,
Freedom from passion and from care,
If they, the amethyst will wear.


Properties of the Amethyst - For those who were born in the month of February the Amethyst is the traditional birthstone. The February birthstone poem reflects some of the properties with which the Amethyst is associated - stability, peace, balance, courage, inner strength, sincerity and a calm disposition. The healing properties of the February birthstone are reputed to be effective for health problems relating to the withdrawal symptoms of any sort of addiction, headaches, insomnia, arthritis, pain relief, circulatory system issues and general healing.

History - For those who were born in the month of February the Amethyst is the traditional birth stone. The history, myths, legends and folklore surrounding the magical properties of different birthstones have been handed down through the ages and from different civilizations