Beware the Ides of March. But Why? 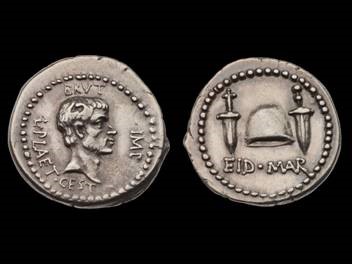 Coin issued by Caesar's assassin Brutus the autumn of 42 BC,
with the abbreviation EID MAR (Eidibus Martiis – on the Ides of March)- reddit.com


It's unlikely even Shakespeare could have predicted how his famous phrase would have evolved according to history.com.

Not only did William Shakespeare’s words stick, they branded the phrase with a dark and gloomy connotation that will forever make people uncomfortable. It’s probable that many people who use the phrase today don’t know it’s true origin. In fact, just about every pop culture reference to the Ides—save for those appearing in actual history-based books, movies or television specials—makes it seem like the day itself is cursed.

But the Ides of March actually has a non-threatening origin story. Kalends, Nones and Ides were ancient markers used to reference dates in relation to lunar phases. Ides simply referred to the first full moon of a given month, which usually fell between the 13th and 15th. In fact, the Ides of March once signified the new year, which meant celebrations and rejoicing.

In 1995 alone, the Ides-related episode of “Party of Five” was based around a cocaine-related death and featured a near-incident involving drunk driving. “Xena: Warrior Princess” had its protagonist facing threats from an ominous vision that showed her and her travel partner, Gabrielle, put to death by crucifixion. And Homer Simpson’s rise to power within the ancient secret society known as the Stonecutters in The Simpsons episode “Homer the Great” leads to his self-proclamation as a God. In warning him of his inevitable downfall, Lisa plays the part of the soothsayer, quoting “beware the Ides of March.” Homer simply says “No,” and laughs it off (much like Caesar did in the play) but, like Caesar, he soon experiences a swift undoing.

In 2011, Columbia Pictures released a movie with the title about an idealistic campaign staffer (Ryan Gosling) who gets a harsh lesson in dirty politics while working for an up-and-coming presidential candidate (George Clooney). The movie involves quite a bit of figurative backstabbing, but it’s a pretty clear allegory for the death of Caesar. Again, death and destruction loom.

Did the death of Caesar curse the day, or was it just Shakespeare’s mastery of language that forever darkened an otherwise normal box on the calendar? If you look through history, you can certainly find enough horrible things that happened on March 15, but is it a case of life imitating art? Or art imitating life?

Perhaps it was Julius Caesar himself (and not the famous dramatist) who caused all the drama. After all, he’s the one who uprooted Rome’s New Year celebration from their traditional March 15 date to January…just two years before he was betrayed and butchered by members of the Roman senate.