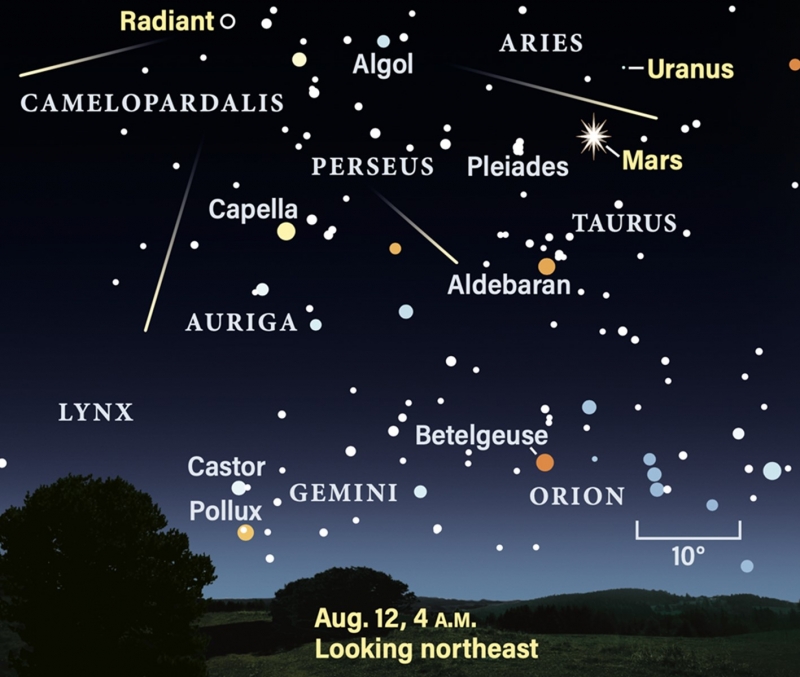 The Perseids are one of the most popular meteor showers of the year according to space.com.

The Perseid meteor shower (also known as the Perseids) greets stargazers every year from mid-July to late August. This year the shower will peak between Aug 11-12, according to the American Meteor Society (AMS)(opens in new tab).

The 2022 Perseids won’t be quite as spectacular as they were in 2021, due to the full moon illuminating the sky.

(The number of meteors a single observer would see in an hour of peak activity with a clear, dark sky and the radiant at the zenith).

The Perseids are caused by Earth passing through debris — bits of ice and rock — left behind by Comet Swift-Tuttle which last passed close to Earth in 1992. The Perseids peak when Earth passes through the densest and dustiest area on Aug. 11-12. Years without moonlight see higher rates of meteors per hour, and in outburst years (such as in 2016) the rate can be between 150-200 meteors an hour.

On a more normal year you can expect to see up to 100 meteors per hour at the shower's peak, according to NASA

Last year, the moon was just a thin crescent and didn't obscure the view of the meteor shower too badly, but the moon's glow is a continuing concern for skywatchers looking for a clear view. Even though the Perseids are especially bright, moonlight can make viewing a bit tricky. This year, the peak of the Perseids will be affected by the full moon illuminating the sky.

A typical Perseid meteoroid (which is what they're called while in space) moves at 133,200 mph (214,365 kph) when it hits Earth's atmosphere (and then they are called meteors). Most of the Perseids are tiny, about the size of a sand grain. Almost none of the fragments hit the ground, but if one does, it's called a meteorite.

Peak temperatures for Perseids are more than 3,000 degrees Fahrenheit (1,650 Celsius) as each fragment travels through the atmosphere and both compresses and heats the air in front of it. Most of the fragments are visible when they are about 60 miles (97 kilometers) from the ground.

What Causes The Perseid Meteor Shower?

Diagram illustrating the path of Comet Swift-Tuttle's orbit and Earth crossing through this path, when it passes through the dustiest area we experience the Perseid meteor shower.

This beloved, annual sky spectacle is caused by the comet Swift-Tuttle.

Swift-Tuttle was discovered independently by two astronomers, Lewis Swift and Horace Tuttle, in 1862. When it last made a pass by Earth in 1992, it was too faint to be seen with the naked eye. The next pass, in 2126, could make it a naked-eye comet similar in brightness to the 1997 Hale-Bopp comet — providing that predictions are correct.

Comet Swift-Tuttle is the largest object known to repeatedly pass by Earth; its nucleus is about 16 miles (26 kilometers) wide. It last passed near Earth during its orbit around the sun in 1992, and the next time will be in 2126.

When you sit back to watch a meteor shower, you're actually seeing the pieces of comet debris heat up as they enter the atmosphere and burn up in a bright burst of light, streaking a vivid path across the sky as they travel at 37 miles (59 kilometers) per second, according to NASA.

Where Can You See The Perseid Meteor Shower?

Diagram showing the perseid radiant located below Cassiopeia constellation. The meteors will appear to radiate from the Perseus constellation.

The Perseid meteor shower will appear to radiate from the Perseus Constellation. (Image credit: Future)

Meteor showers are named after the constellation from which the meteors appear to emanate. From Earth's perspective, the Perseids appear to come approximately from the direction of the Northern Hemisphere constellation Perseus.

You can see the Perseid meteor shower best in the Northern Hemisphere and down to the mid-southern latitudes, and all you need to catch the show is darkness, somewhere comfortable to sit and a bit of patience.

To best see the Perseids, go to the darkest possible location and lean back and relax. You don't need any telescopes or binoculars as the secret is to take in as much sky as possible and allow about 30 minutes for your eyes to adjust to the dark.

Keeping warm and comfortable is key to a successful night of meteor hunting. To best see the Perseid meteor shower, go to the darkest possible location and lean back and relax.

When Is The Best Time To View The Perseid Meteor Shower?

The best time to look for meteors is in the pre-dawn hours. The meteors will peak between August 11-12, according to AMS. According to NASA, the Persieds will be active from July 14 to August 24.

The peak viewing days are typically your best shot to see the sky speckled with bright meteors. To see the meteors, look up and to the north. Those in southern latitudes can look toward the northeast to see more meteors.

Could Comet Swift-Tuttle Collide With Earth?

An astronomer calculating Swift-Tuttle's orbit once suggested that it could come dangerously close to Earth in 2126 and possibly collide with the planet. Further refinements, however, show that the comet will not, according to a primer by the Astronomical Society of the Pacific.

Advertisement
Swift-Tuttle's pass by Earth in the year 3044 could bring it within a million miles of our planet. That's just over twice the distance from the Earth to the moon, making the comet very close in astronomical terms.

The uncertainty came because initial projections for Swift-Tuttle's path through space came from only three months of observations in the 1860s, when the comet was first discovered, added the primer's author, Sally Stephens.

In the 1970s, astronomers noted that the number of annual Perseids meteors was increasing, suggesting that the comet would make an appearance soon. "But it failed to show, and soon afterward, Perseid meteor activity dropped sharply. Astronomers wondered if the comet had somehow come and gone unnoticed," Stephens wrote.

Brian Marsden, who was an astronomer with the Harvard-Smithsonian Center for Astrophysics, suggested in 1973 that Swift-Tuttle might be the same comet as one seen in 1737 by a Jesuit missionary in China.

Marsden suggested the comet would return in 1992, which it did, but its closest approach was 17 days off from his prediction. He continued tweaking his calculations. Although he initially predicted a possible collision in 2126, he examined the historical record and found observations of a comet in a similar track as far back as at least 188 A.D. — allowing him to calculate the comet would pose no harm.

"His new calculations show Comet Swift-Tuttle will pass a comfortable 15 million miles from Earth on its next trip to the inner solar system," Stephens wrote.