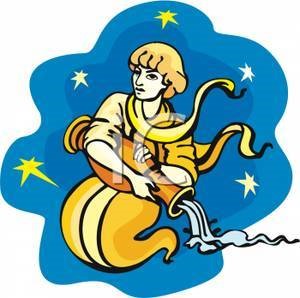 With Aquarius season upon us from January 19 to February 18 here are some quick thoughts on it from oprahmag.com.

Welcome to Aquarius Season! This year, there will be some big Aquarius energy in the cosmos: the Sun, Mercury, Venus, Jupiter, and Saturn will all be in Aquarius. This stack of planets will definitely push us to change our mindsets and understand different perspectives.

Here's a run down of all of the major planetary transits we can expect in the month ahead:

The Sun entered Aquarius on January 19th, starting a month-long journey around humanitarian and innovation.

The Moon will be in the anaretic degree—the very late degree of a sign—of 29 degrees Aries on February 16th. Translation? Expect some combative energy around Inauguration Day, which will be a day of mixed energies. Prepare yourself for protests and turmoil, as well as a day of happiness in welcoming the new President and Vice President.

Elusive Neptune, which is in Pisces, will square off with the Nodes of Destiny on who are moving backwards on the Gemini-Sagittarius lunar axis, January 26th. This means confusion and ambiguity will be felt, so it’s important to remain calm on this day. Anxieties may form as well; relax by meditating with an amethyst and selenite crystal.

The first Full Moon of 2021 occured in Leo on January 28th. This is a time to bring in the energy we love and are passionate about. Anything less than stellar and magical will fall by the wayside.  The second Full Moon of this year is February 27th.  We are asked to strike a balance in our lives.

January 28th also brought the conjunction between the Sun and Jupiter in Aquarius. Known as the “Day of Miracles,” it was the luckiest day of 2021. You might have bought some lottery tickets that day.

The first Mercury retrograde of 2021 started on January 30th and lasts until February 21st in Aquarius, giving all of us the chance to reassess, revise, rethink and regroup our plans.

The New Moon in Aquarius on February 11th will allowed us to think and discuss how we could take action as a collective to help better society.

Valentine’s Day was meant to be sensual and passionate, especially since the Moon is in red hot Aries. Prepare yourself to be both wooed and pursued until it enters Taurus tomorrow..

Authoritative Saturn, which is in Aquarius, shares a fraught connection with rebellious Uranus, which is in Taurus, on February 17th. This is the first of three times these two planets will face off in 2021. The other two times are June 15th and December 24th. It will be a time of much needed sweeping changes, most of which we may not be ready for.