What is a Polar Vortex 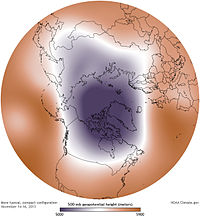 Does this headline from NBC News look familiar to the many in the northeastern section of the United States?  Burst pipes, slippery walks and the need to layer more than normal all added up to a miserable few days.  And it’s all blamed on something called the Polar Vortex.

But what IS a Polar Vortex?  Is it just something the Weather Channel made up?  Not so according to this article from Wikipedia!

There are two polar vortexes in the atmosphere of planet Earth, one around the North Pole, and one around the South Pole. Each polar vortex is a persistent, large-scale cyclone, circling the planet's geographical poles. The bases of the two polar vortices are located in the middle and upper troposphere and extend into the stratosphere. They surround the polar highs and lie in the wake of the polar front. These cold-core low-pressure areas strengthen in the winter and weaken in the summer due to their dependence upon the temperature differential between the equator and the poles. They usually span less than 1,000 kilometers (620 miles) in diameter within which the air circulates in a counter-clockwise fashion in the Northern Hemisphere, and in a clockwise fashion in the Southern Hemisphere. As with other cyclones, their rotation is caused by the Coriolis effect.

The Northern Hemisphere (Arctic) vortex often contains two low pressure centers, one near Baffin Island, Canada and the other over northeast Siberia. Within the Antarctic vortex in the Southern Hemisphere a single low pressure zone tends to be found near the edge of the Ross ice shelf near 160° west longitude. When the polar vortex is strong, the Westerlies increase in strength. When the polar cyclone is weak, the general flow pattern across mid-latitudes buckles and significant cold outbreaks occur. Ozone depletion occurs within the polar vortices – particularly over the Southern Hemisphere – reaching a maximum depletion in the spring.

The polar vortex was first described as early as 1853. The phenomenon's sudden stratospheric warming (SSW) shows during the winter in the Northern Hemisphere and was discovered in 1952 with radiosonde observations at altitudes higher than 20 km.

A study in 2001 found that stratospheric circulation can have anomalous effects on weather regimes. In the same year researchers found a statistical correlation between weak polar vortex and outbreaks of severe cold in the Northern Hemisphere. In more recent years scientists identified interactions with Arctic sea ice decline, reduced snow cover, evapotranspiration patterns, NAO anomalies or weather anomalies which are linked to the polar vortex and jet stream configuration. However, because the specific observations are considered short-term observations (starting c. 13 years ago) there is considerable uncertainty in the conclusions. Climatology observations require several decades to definitively distinguish natural variability from climate trends.

The general assumption is that reduced snow cover and sea ice reflect less sunlight and therefore evaporation and transpiration increases, which in turn alters the pressure and temperature gradient of the polar vortex, causing it to weaken or collapse. This becomes apparent when the jet stream amplitude increases (meanders) over the northern hemisphere, causing Rossby waves to propagate farther to the south or north, which in turn transports warmer air to the north pole and polar air into lower latitudes. The jet stream amplitude increases with a weaker polar vortex, hence increases the chance for weather systems to become blocked. A recent blocking event emerged when a high-pressure over Greenland steered Hurricane Sandy into the northern Mid-Atlantic states

The chemistry of the Antarctic polar vortex has created severe ozone depletion. The nitric acid in polar stratospheric clouds reacts with chlorofluorocarbons to form chlorine, which catalyzes the photochemical destruction of ozone. Chlorine concentrations build up during the polar winter, and the consequent ozone destruction is greatest when the sunlight returns in spring. These clouds can only form at temperatures below about ?80  C (?112  F). Since there is greater air exchange between the Arctic and the mid-latitudes, ozone depletion at the north pole is much less severe than at the south. Accordingly, the seasonal reduction of ozone levels over the Arctic is usually characterized as an "ozone dent", whereas the more severe ozone depletion over the Antarctic is considered an "ozone hole". This said, chemical ozone destruction in the 2011 Arctic polar vortex attained, for the first time, a level clearly identifiable as an Arctic "ozone hole”