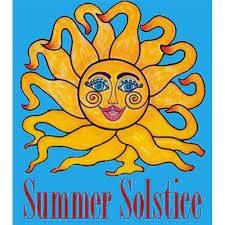 The seasonal cycle of the year is created by Earth’s annual orbit around the sun says this article from wemoon.ws.

Solstices are the extreme points as Earth’s axis tilts toward or away from the sun, when days and nights are longest or shortest. On equinoxes, days and nights are equal in all parts of the world. Four cross-quarter days roughly mark the midpoints in between solstices and equinoxes. We commemorate these natural turning points in the Earth’s cycle. Seasonal celebrations of most cultures cluster around these same natural turning points.

Feel the sun within you shining with abundance, as we blink in the light of that glowing promise, resurrection from death. The triumph of light peaks, slides slowly to dissolve. This is the tipping point for everything: democracy, misogyny, racism, climate, freedom. All are on a cliff edge. We've reached the neon-bright entrance to The Great Turning. Change is the only thing that doesn't change. Are we ready? Trapped between a failed story and a future at risk, it's time to live in mythic terms, to change our language from techno-data to poetry. Gather together in circles; trade material bribes for the ecstacy of interconnection.

Every conventional symbol system of our culture is bankrupt, and that's good, because now, at last, we have the potential to open, to sway and to fall.

Call in the sacred rescue workers: the cultural shamans, the clowns, the shapeshifters, the change agents, and let's rewrite the rules, now!

What will save us? Not profit-driven technology and not imperial force. Only the imagination. What can you imagine?"

As the sun captures the top of the sky, we crest the day with exuberance, hand ourselves over to the juice, to wild swims, the silken overlap of petal on petal, open faced flowers loved by bees, their centres easy to reach.

Cowled in heat and the verdant smells of grasses at thigh height, our eyes are drawn to the hilltops and skies beyond.

A walk up to Midsummer’s summit gives us clear and far sightedness. As a cloud like the shadowy bird of midwinter passes over, we experience the dark side of the sun, remember countries on fire, lands parched, pleasure dependant on what country we belong to if any. On our way back down, we choose what actions will draw us up to our full height.

Using the magic of Midsummer night, the enchanted song-light through the woods we build a fire to charge up our potency, weave a garland of prayers with wildflowers and herbs for the next generations of Earth protectors, float it down river watched over by the Sidhe.

Summer Solstice is celebrated the world over

The life giving Sun is celebrated all over the world with various traditions, like fire festivals, song circles and dance ceremonies. Monuments like the great pyramids and Stonehenge were built to measure time and so the four markers of the season—summer and winter solstices, fall and spring equinoxes—could be pinpointed.

When are the Solstice, Equinox, and Cross-Quarter holy-days Celebrated?
Traditional pagan Celtic / Northern European holy days start earlier than the customary Native / North American ones—they are seen to begin in the embryonic dark phase: e.g., at sunset, the night before the holy day—and the seasons are seen to start on the Cross Quarter days before the Solstices and Equinoxes. In North America, these cardinal points on the wheel of the year are seen to initiate the beginning of each season.

Summer Solstice is marked by the Sun  moving into the sign of Cancer, generally falling somewhere between the 19th–22nd of June.

Niman Katsina or Kachina in the Hopi Tradition

This is the time of year that the Hopi peoples celebrate Niman to say goodbye to the cooler winter and spring seasons, and welcome in the warmer weather. It is a 16 day festival, complete with shared meals and ceremonial dances. Family members gather from far and wide to reconnect. This is the time of corn planting, and gardens are brimming with sustenance by this time of year.

Isis is celebrated in Goddess Festivals in Egypt

This was considered New Year in ancient Egypt! The Nile river is at peak height during this time of year, and so flood levels for the year analyzed, depending on observations of the waterline. The Nile's yearly floods promised abundant harvests.

The Star Sirius and the Goddess Isis

Ancient Egyptians believed that Sirius was responsible for the flooding of the Nile river, because its appearance in the night sky corresponded with this midsummer time of year. Isis is associated with Sirius. One of the most revered of Goddesses, Isis was celebrated as the giver of life sustaining water.

The Taino are the peoples indigenous to the Caribbean, Cuba, Haiti and the Dominican Republic, Jamaica, the Antilles, Bahamas and Puerto Rico. Celebrations and ceremonies honoring Yellow Corn Mother are still held each year in midsummer. Traditionally, these rituals and celebrations were held in the central plazas of Taino villages, and many of these plazas were designed to identify the changing seasons, much like Stonehenge and the pyramids.

Ishtar was celebrated in Ancient Mesopotamia

Summer Solstice was "celebrated" by ancient Babylonians by observing 6 days of mourning! Ishtar, Goddess of fertility, love and war, would mourn the annual death of her partner, Tammuz. Tammuz is the Mesopotamian God of plants and of food. He is said to die every summer and to be reborn every winter, much like Inanna passes into the underworld each fall, and Louis the Sun King dies each Winter Solstice, and rises again at Summer Solstice.

The Funeral for Tammuz

This dramatic reenactment of the the six-day wake for Tammuz involved a heartful sung dirge. They honored their fallen god with by placing his statue on a funeral bier, and with processions of mourners weeping and wailing as they recited the dirge.

Sunna is the Norse Sun Goddess, and she is honored in that far north country, where the Sun barely sets, with bonfires that last all night long (granted, it is the shortest night of the year).

Modern Wiccan / Pagan Summer Solstice Rituals and Traditions
Today, we mark the changing season with a variety of rituals and traditions derived from our many diverse backgrounds. Here are some ideas:

You can create an altar anywhere, indoor or out. If it's time to refresh your personal altar, this is a good time to do that. Use a fresh, brightly colored altar cloth. It's traditional to decorate your Summer Solstice altar with an abundance of fresh flowers and a candle, preferably white, yellow or orange. If you have  symbols of the summer season, this is a good time to bring them out into the light. Visit our blog post all about creating altars for ideas and inspiration.

Do something you love, all day long!

This is the longest day of the year, and many revelers celebrate by having an all day party. The theme of the party is your choice: Art, game playing, snacking, love-making, hiking. Your imagination is the limit!

How to Celebrate Summer Solstice:

Honoring the Turning of the Wheel of the Year: What are some other Pagan Summer Solstice Rituals and Traditions?

This tradition is as ancient as the Sun, Herself. as long as it is safe where you are, this time of year, a campfire or bonfire is the quintessential way to hail in the Summer. Either alone or in a group, there are many variations on rituals around a bonfire. Some ideas: 1) Describe on a piece of paper something that you intend to release in the coming months, and burn it. 2) Focus on a question (shall we call it a "burning" question?) and gaze into the fire. Allow thoughts, words and images to pass through your consciousness. Does the answer surface for you? This is Fire Scrying. 3) Gather friends around the fire with drums, guitars, voices. Sing, dance and drum the Summer in!

Summer Solstice is traditionally a time of being out in the world, being social, interacting with community. This is a perfect day for a potluck. Your gathering can be as formal or as informal as you like. The important ingredient for this tradition is celebrating your companionship as we move together into another season.

In my community, no group ritual is complete without a proper circle song or two. We usually use the popcorn method (women spontaneously choose a song they feel led to sing, and the others join in) or you can use a song circle book like Rise Up Singing or Circle Round. If you've musicians in the group, they want to play along. Rattles and drums are always a fun addition to a song circle.

Some solitary witches I know like to harvest ripe fruits on Summer Solstice and preserve jellies and jams. In that way, they are able to preserve the magic and spirit of Solstice Tide, all year long. These preserves can also be a part of your Winter Solstice tradition, as well, connecting the two extremes of the year, across the wheel. Opening a jar of sweet, bright jam releases the stored energy of the sun, right there at your kitchen table.

"The sun reaches its highest point of the year, like the culmination of a full moon's waxing. In order to stay steady in this full solar power, we ground ourselves by inviting the earth and the sky to meet in our bodies.
"As stewards, we take stock of self and world. Has an old teacher, perhaps the Dragon of Not-Enough, melted in the fires during the first half of the solar wheel? We bow and thank her before turning to discover the new teacher, who, as the waxing year gives way to the waning, will wrench our perspective wider.

"Today we sit with the expansion of light, taking it in.
"To claim the new and larger boundary of our personal fire, we join it in ritual to that of others, and together, dance it outward. We make sacred ceremony not only for and with our immediate community, but for all our relations. The Lakota phrase mitákuye Oyásin reminds us, "I am related to all things, and all things are related to me."

Small Worlds of Hope and Healing

"As I have connected with nature mid-life, I have been amazed at the everyday magic evident in every forest, marsh and urban park.

I have seen Nurse Logs that appeared lifeless and filled with rot one week, birth an entire micro forest the next. Dandelions bloom from solid asphalt; a frozen marsh thaws and pushes forth marigolds within days.

Lifeless ponds lie dormant for months beneath a shawl of ice, then burst with bird and frog song.

The Earth has not given up. She is not beaten, but merely recovering, and we can learn and gain strength from her resilience."

I am no angel.
My feet are caked with dirt,
my thoughts like tainted snow,
my halo is askew
where my antlers want to grow.
That is the nature of me.

I am atoms and moondust
and laughter and tears,
sand, mud, and blood,
lightning, drought, and fears.
I am a force of nature.

With these freckles and wrinkles
and creaks, groans, and flaws
and magic and desires,
teeth, sneers, and claws;
with my history
and perspectives—
dogmas and views—
I swing from one tree branch
into another mood.
I am a freak of nature.

I am no angel,
just as nature meant for me.
My spirit outlined clearly
in impressions that I leave
as I step and I dance
and I spin and I sprawl,
as I write and I sing
and I stretch and I fall.
I am moss and the earth,
part root and part cone,
wings and some fur
and tendons and bone.

Though I know I'm no angel
I make snow-white wings
to soar my wild mind
where nature still sings.
That is the nature of me.