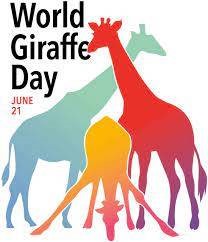 World Giraffe Day is celebrated on June 21 every year according to nationaltoday.com. The holiday was established by the Giraffe Conservation Foundation (G.C.F.) as a way to celebrate the tallest animal in the world. World Giraffe Day takes place during the summer solstice in the Northern Hemisphere and the winter solstice in the Southern Hemisphere. Alongside celebrating giraffes, the G.C.F. uses the day to raise funds for the conservation of the wild giraffe population across the world and to raise awareness about the challenges these animals face. Institutions around the globe organize events on World Giraffe Day to properly celebrate the holiday.

Considering that giraffes can grow to become about 18 feet in height, it’s not surprising that humans have documented the existence of giraffes for as long as we’ve had writing systems. The earliest human-made records of giraffes date back to Ancient Egyptian tomb paintings. The Ancient Egyptians valued giraffe tail hair for weaving belts and jewelry. Over the years, giraffes began appearing in the writings of travelers across the world, from Greece to China. Giraffes were treated as valuable royal pets, symbolizing the status of their owner. Giraffes were also hunted, often for fashion-related or medical purposes.

The hunting and trade of giraffes led to a sharp decline in the global population by the 19th and 20th centuries. Currently, there exist several different kinds of distinct subspecies of giraffes. The genus is divided into the northern giraffe, the southern giraffe, the Masai giraffe, and the reticulated giraffe. The decline steadily continued over the next few decades. The International Union for Conservation of Nature has announced that the giraffe’s Red List status had changed from ‘least concern’ to ‘vulnerable’ in 2016.

The major causes of the giraffe population’s decline range from the destruction of their natural habitats to illegal poaching for traditional medicine, meat, skin, and tails. Today, foundations like the Giraffe Conservation Foundation are working tirelessly to conserve the giraffe population and ensure that the biodiversity of the world does not dwindle further.

30 Million Years Ago
The Giraffe Branches Out
The giraffe branches out from other members of the order ‘Artiodactyla.’
1500 B.C. — 1400 B.C.
The First Royal Giraffe
Egyptian Pharaoh Hatshepsut becomes the first known person to have a menagerie, including a giraffe.
13th Century
The East African Giraffe Trade
Giraffe hides are supplied by East African regions.
2016
The I.U.C.N. Announces Danger
The I.U.C.N. announces that giraffe populations are now ‘vulnerable.’

How much is a giraffe?
Giraffes are incredibly expensive creatures. If you buy a healthy young giraffe, it can easily cost $60,000 or more.

Can you sponsor a giraffe?
You absolutely can. Many organizations, like the G.C.F., offer you that option.

What do giraffes eat?
Giraffes mostly eat the leaves of the acacia tree.

Learn about giraffes
The day is specifically dedicated to giraffes. Take this holiday as an excuse to learn more about the animal.

Talk about it on social media
The G.C.F. runs a social media campaign every World Giraffe Day. Take part in it to help spread the word!

Running speed
Giraffes can run about 35 miles per hour over short distances.

Water consumption
Giraffes get most of their water supply from the plants that they eat.

Short sleep
Giraffes only need to sleep for a maximum of 30 minutes per day!

Giraffe groups
A group of giraffes is referred to as a ‘tower.’

WHY WE LOVE WORLD GIRAFFE DAY

Giraffes are interesting
Giraffes are fascinating creatures. World Giraffe Day is an excuse to learn more about these gentle giants

It’s an important cause
The preservation of biodiversity is critical. The day highlights the need to preserve the giraffe population.