What Is The May Birth Flower? Two Official May Flowers With Meanings 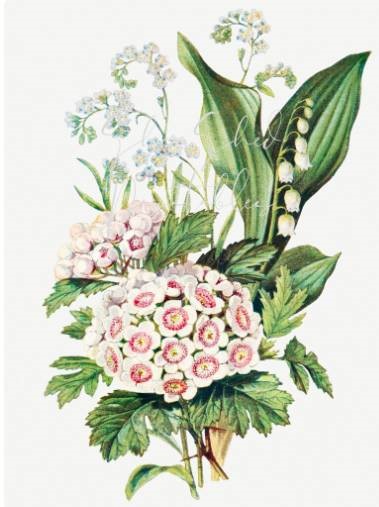 According to the list of birth flowers by month, lily of the valley and hawthorn blossoms are the two birth flowers for May according to trulyexperiences.com. Each flower has its own special meaning and significance and represents different characteristics of those who share this birth month.

While its name suggests otherwise, the Lily of the Valley is not a true lily. The plant is actually a member of the asparagus family.

Known for their sweet fragrance, the flowers from this plant are bell-shaped and most commonly found in white. The flowers bloom abundantly in the month of May, which is why they are also often referred to as May lilies.

Convallaria majalis, Lily of the Valley’s scientific name, is quite telling in itself. The term majlis roughly translates to “of or belonging to May”, while the word convallaria means “valley plant”, making it the perfect May birth flower.

These flowers were first cultivated as far back as 1420 and are native to Europe and Asia.

The term “lily of the valley” does not speak to one specific birth flower for the month of May, but rather to a family of blooms:

Rosea Lily of the Valley

This variety of the blossom flaunts pale, rosy pink flowers on the stems of the plant. They convey a sense of happiness, grace and appreciation, which is why they are commonly presented as birthday gifts.

Hardwick Hall Lily of the Valley

The Hardwick variety of Lily of the Valley boasts small, cream, bell-shaped flowers with dark green leaves that feature golden stripes along their edges.

These are perhaps the most popular cultivars. Golden slippers feature striking golden foliage that complements the elegance of the small white flowers.

As with most birth flowers, Lily of the Valley carries different meanings and serves as a symbol for many things.

Perhaps the most common association with these flowers is their recognition as a symbol of romance. Several decades ago, men in France presented these fragrant flowers to their significant others in bouquets to express their affection in a tradition known as La Fęte du Muguet.

Romance aside, the Lily of the Valley is a symbol of good luck and happiness, as they are often put on display in celebration of the arrival of spring. It’s also said that because of their sweet fragrance and small white flowers, these blossoms have become a symbol of humility and purity.

There is an element of sadness attached to the lily of the valley too. The flowers serve as a symbol of sadness and pain due to loss or death. As a result, these lilies are commonly found in flower arrangements at funerals and placed on top of the coffin as a symbol of loss and mourning.

The shape of the little white flowers carries a great deal of significance as well. It’s said that bell shape helps drive away evil spirits. As a result of this, Lily of the Valley plants can serve as symbols of peace and serenity.

The second suggests that Mother Mary’s tears turned into Lily of the Valley flowers when the Romans crucified Jesus. As a result, other common names for the flowers include Mary’s tears and Our Lady’s tears.

What Do Lilies Of The Valley Say About May Babies?

With their symbolism of good luck, happiness, humility, purity, and romance, people born in May exhibit many of these qualities. That friend that seems blessed by random good things happening all the time but still has both feet on the ground? Probably born in the fifth month!

Tips For Buying Lilies Of The Valley

These funnel-shaped flowers come in lavender, pink, purple, white, and yellow and the leaves are generally green but may have a purple tinge or underside. Keeping this in mind, don’t go out with the colour you want firmly fixed in your mind. Blooms are unpredictable, so examine them all and make your decision based on the overall health and quality instead.

Hawthorn, one of the May birth flowers

May’s other birth flower is the hawthorn. This plant is different from the lily of the valley in several ways.

For one, hawthorns are not typically used as cut flowers in bouquets or other floral arrangements. Instead, they’re considered to be more of a shrub than a flower.

The name hawthorn typically refers to the Crataegus genus of shrubs and smaller trees within the Rose family. Other common names of these plants include quickthorn, whitethorn and haw berry, although the most popular kind of hawthorn is simply the common hawthorn plant, scientifically known as Crataegus mongyna. The word Crataegus is of Greek origin and comes from the words kratos and akis, which mean “strength” and “sharp”, respectively.

Hawthorn plants are commonly referred to as the May tree. The flowers on the plant blossom in pink and white and as a result, landscapers often use this shrub as ornamental hedges.

When it comes to the meaning of flowers, hawthorn has a lovely positive connotation. It represents a sense of hope and supreme happiness.

In many cultures, the hawthorn plant serves as a symbol of love and beauty, due in part to the elegant look and form of the tree. Furthermore, because most species of hawthorn typically present thorns, the plant embodies protection. So, if you gift someone a hawthorn, you are letting them know you wish them nothing but the best.

In the Harry Potter series of books by J. K. Rowling, Draco Malfoy, the main character’s rival, had a hawthorn wand. This is, no doubt, a nod to the fact that up to as recently as the 19th century, people thought this plant had supernatural powers.

What Does Hawthorn Say About May Babies?

Because of its links to beauty, fertility, happiness, hope, and love, your May-born compatriot will embody a very positive attitude and outlook. They’re optimistic babies who believe in everyone’s greater good!

Check that the stems are sturdy and firm. If they’re bent or broken, your hawthorn blossoms will wilt very quickly.

Buying Flowers For A May Birthday

Birth month flowers are generally in season for their specific month, so you won’t struggle to find a florist offering mixed bouquets. Lilies of the valley typically bloom in mid-April and retain their blossoms for most of May and hawthorns can be found from March right through to November.

For Your Mom Or Dad

Buying lilies of the valley and hawthorn as a gift for your parents would indicate your appreciation of the ongoing romance between them and your wish for a happy future.

Tell your beloved that you are well aware of the feelings of excitement and glamour of love they bring to your life with this mixed bouquet.

The purity and humility that lilies of the valley embody make them a wonderful choice to honour your grandparents’ role in your life.

For A Friend Or Colleague

Tell your friend you wish them the best of luck and happiness with lilies of the valley and hawthorn for whatever endeavour or occasion you’re celebrating.

The Best Gift Is A Thoughtful One

As birth flowers for May, Lily of the Valley and Hawthorn each carry a great deal of significance, making them all the more special. Next time you celebrate a May baby’s birthday, consider either of them as a gift!