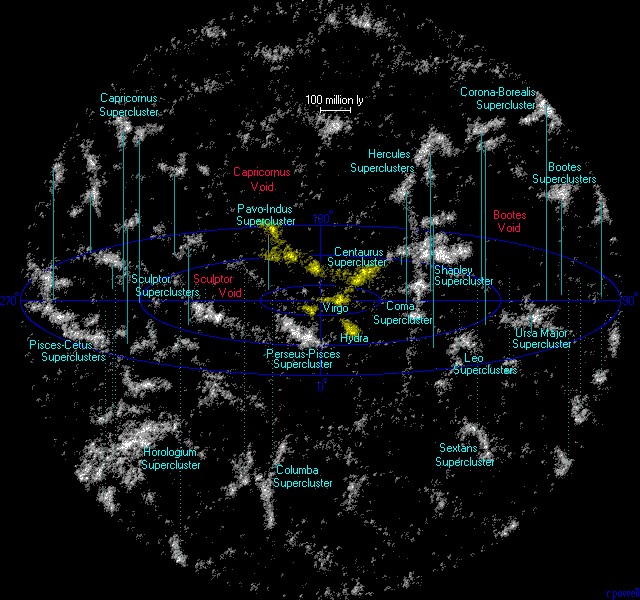 Many are asking about the Great Attractor (14° Sagittarius) – wanting discussion/diving into this according to saturnseasons.com.

So…..what is the Great Attractor? It is supposedly the gravitational pull point in the Laniakea Supercluster (a “meta-galaxy”/collection of super-clusters of galaxies in which our own galaxy is a part of). It is considered an anomaly because the Great Attractor functions like a black hole (it warps time, space, and light), but unlike a black hole it has no event horizon (so it doesn’t fit the standard definition OF a black hole). The Great Attractor appears to be pulling different super clusters of galaxies towards it, and scientists believe that our own galaxy supercluster is also being pulled towards it. The GA is also thought to be made up of “dark energy.” The definition of dark energy is “anything that is, in effect, an intrinsic property of space. That has a constant energy density regardless of the dimensions of the volume under consideration. Thus, unlike ordinary matter it is not diluted by the expansion of space.” Dark energy is thought to be the reason that the universe is accelerating in its rate of expansion (though no one seems like they are 100% sure about this). Dark doesn’t mean literally dark (or bad/negative), but “mysterious” and “unknown,” and unknown it is – while it is thought to make up a whole bunch of space, scientists still aren’t real sure what the fuck dark energy is.

Same thing could be said about the GA – scientists KNOW there is something there pulling these different superclusters towards it, but they aren’t real sure how to classify the GA. To make it even more difficult to understand, the GA happens to fall in the zone of avoidance (which means it isn’t easy to see it with visible light wavelengths due to being blocked by the Milky Way’s galactic plane). The only way that it has been observed is with X-rays (though the area of space where they think the GA is located happens to be in an area where the Norma Cluster of galaxies is located). So, lol, that’s fucking weird. If this is actually like a black hole, shouldn’t it be “sucking” up the Norma Cluster?

Why does any of this matter, lol? I like to look at the science behind this deep space shit to try to apply it to a natal chart (and to see how it might function in a natal chart). Here are some thoughts that I have about the GA and how it might function in a natal chart. While the GA can be pulled in anyone’s chart, I do think it probably has the most impact in the lives of people who have conjunctions to the GA (planets, Chiron, the Nodes, cardinal points, etc.).

-Even if scientists aren’t sure WHAT the GA is or HOW the GA functions, it does seem to be some kind of force that pulls things to it. This makes me think that the GA in a natal chart functions in a similar way – acting as an attracting force. Is this for the good of the person, or to the person’s detriment? I’m a little on the fence about this particular notion. I feel like this could really go either way.

-Since the GA happens to be in the Zone of Avoidance in the sky, I feel like this can probably be translated down to the natal chart, too. The person may not be as clear about what the GA attracts into their life (or even what they can consciously attract when they are able to SEE/FEEL the GA in their own charts and how it functions).

-A planet conjunct the GA (or cardinal point, Chiron, etc.) may attract things into the native’s life dealing with whatever planet (et.al) is involved in the conjunction. This person may not have as much conscious control of what they attract in this regard. However, I have this idea that when the person is consciously aware of what they attract, they are probably able to attract exactly what they want to them (this probably takes a lot of self-control and self-awareness).

-I have mentioned before that the Galactic Center might function like an antenna, picking up shit from the GC and even shooting stuff back out from the antenna. I think the GA might function in a similar way (but it DOES feel different than the GC, even if they both have the feeling of having this antenna). I’ll have to sit with this part a little longer to figure out exactly HOW to articulate the difference, lol.

How can you pull the Great Attractor in your own chart? Go to astro.com and go to the “extended chart selection” after creating an account. Go down to where it says “additional objects” towards the bottom, and click on the list of “fixed stars.” Go down the list, and once you get to the G’s, look for something labeled “Great Attractor, GA.” Click on that option and then pull your chart.