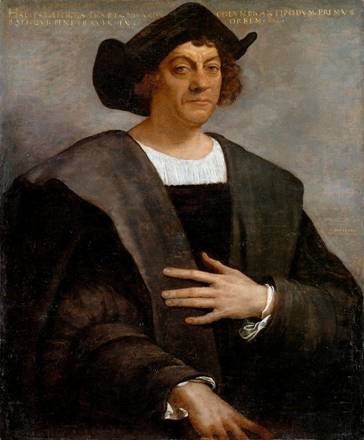 Columbus Day is a U.S. holiday that commemorates the landing of Christopher Columbus in the Americas in 1492 according to history.com. It was unofficially celebrated in a number of cities and states as early as the 18th century, but did not become a federal holiday until 1937. For many, the holiday is a way of both honoring Columbus’ achievements and celebrating Italian-American heritage. But throughout its history, Columbus Day and the man who inspired it have generated controversy, and many alternatives to the holiday have proposed since the 1970s including Indigenous Peoples' Day, now celebrated in several U.S. states.

Christopher Columbus was an Italian-born explorer who set sail in August 1492, bound for Asia with backing from the Spanish monarchs King Ferdinand and Queen Isabella aboard the ships the Nina, the Pinta and the Santa Maria.

Columbus intended to chart a western sea route to China, India and the fabled gold and spice islands of Asia. Instead, on October 12, 1492, he landed in the Bahamas, becoming the first European to explore the Americas since the Vikings established colonies in Greenland and Newfoundland during the 10th century.

Did you know? Contrary to popular belief, most educated Europeans in Columbus' day understood that the world was round, but they did not yet know that the Pacific Ocean existed. As a result, Columbus and his contemporaries assumed that only the Atlantic lay between Europe and the riches of the East Indies.

Later that October, Columbus sighted Cuba and believed it was mainland China; in December the expedition found Hispaniola, which he thought might be Japan. There, he established Spain’s first colony in the Americas with 39 of his men.

In March 1493, Columbus returned to Spain in triumph, bearing gold, spices and “Indian” captives. The explorer crossed the Atlantic several more times before his death in 1506.

It wasn’t until his third journey that Columbus finally realized he hadn’t reached Asia but instead had stumbled upon a continent previously unknown to Europeans.

Columbus Day in the United States

The first Columbus Day celebration took place in 1792, when New York’s Columbian Order—better known as Tammany Hall—held an event to commemorate the historic landing’s 300th anniversary. Taking pride in Columbus’ birthplace and faith, Italian and Catholic communities in various parts of the country began organizing annual religious ceremonies and parades in his honor.

In 1892, President Benjamin Harrison issued a proclamation encouraging Americans to mark the 400th anniversary of Columbus’ voyage with patriotic festivities, writing, “On that day let the people, so far as possible, cease from toil and devote themselves to such exercises as may best express honor to the discoverer and their appreciation of the great achievements of the four completed centuries of American life.”

In 1937, President Franklin D. Roosevelt proclaimed Columbus Day a national holiday, largely as a result of intense lobbying by the Knights of Columbus, an influential Catholic fraternal organization.

Christopher Columbus: How The Explorer's Legend Grew—and Then Drew Fire

Columbus's famed voyage to the New World was celebrated by Italian-Americans, in particular, as a pathway to their own acceptance in America.

Christopher Columbus has long been exalted as a heroic figure in American history: the first explorer to establish a European presence in the New World. Americans have celebrated his arrival as far back as 1792, the 300th anniversary of his landing. But it would take almost 200 more years—and a century-long campaign by Italian Americans—to establish a federal holiday in his name.

Early Italian immigrants, facing intense discrimination, had good reason to embrace the Genoa-born seafarer. Putting an Italian face on the hero of America's origin story gave them a powerful symbol of their own Americanness, while the Columbus Day holiday gave them a national platform to bask in his reflective glow and celebrate their heritage. But as modern historians began to spotlight the brutal side of the explorer’s legacy—especially relative to native communities—calls to abolish Columbus Day, or replace it with Indigenous People’s Day, have transformed the annual celebration of Italian pride into a flashpoint of controversy.

Long before Columbus became the symbol of Italian American identity, he was mythologized by a largely Protestant America as a heroic explorer who paved the way for the divinely sanctioned “founding” of the United States by European Christians. Throughout post-revolutionary America, his name became ubiquitous: In 1784, King’s College in New York was renamed Columbia College; in 1790, the nation’s capital was moved to the District of Columbia; and states like South Carolina and Ohio seated their governments in cities named Columbia and Columbus.

“The 1792 celebration of Columbus’s landing was a [white Anglo-Saxon Protestant] holiday celebrating the new country, new land and our separation from European nations,” says William Connell, a professor of Italian American history at Seton Hall University and co-editor of The Routledge History of Italian Americans.

Columbus’s heroic stature was further cemented by Washington Irving's freely embellished 1828 bestseller, A History of the Life and Voyages of Christopher Columbus, which launched the popular myth that only Columbus believed the earth was round and stood as the lone voice of reason against medieval Catholic Church authorities.

But starting in the second half of the 19th century, as more Irish and Italians immigrated to America, they embraced Columbus as a pathway to validate their burgeoning communities. San Francisco’s Italian Americans celebrated their first Columbus Day in 1869. In New York City, the earliest evidence of a distinctly Italian American Columbus Day was an event held in 1866, sponsored by a local chapter of the Italian Sharpshooters Association.

And in 1882, a group of Irish Catholic priests founded a fraternal service group called the Knights of Columbus, which grew to have a heavy Italian American membership. “It’s a measure of how much respect Columbus had,” says Connell, “that the Irish Catholics saw Columbus as a path to legitimization, just as the Italians would.”

The masses of Italian immigrants who began arriving in America in the 1880s stood out from the predominantly Northern Europeans who came before them. Mostly poor farmers escaping starvation in Southern Italy, they had dark complexions and many spoke little English. They were frequently stereotyped as simple-minded criminals, and the press stoked fears of Southern Italians as all being members of the Sicilian mafia.

Anti-Italian discrimination occasionally engendered brutal acts of violence. In 1891, after the police chief of New Orleans was gunned down in the street, police rounded up 250 Sicilian immigrants without cause, trying nine for murder. After all were acquitted for lack of evidence, a 20,000-person mob organized by the mayor and other prominent New Orleans citizens stormed the prison and killed the nine men, plus two more Sicilians being held on unrelated charges. The mob then strung up the mangled corpses, in what was one of the largest mass lynchings in American history.

“One of the most startling things about the New Orleans lynchings is the response at the time,” says Connell, which was anything but sympathetic to the Italian victims.

The New York Times published an editorial cheering the mob justice in Louisiana and spreading anti-Italian stereotypes: “These sneaking and cowardly Sicilians, the descendants of bandits and assassins, who have transported to this country the lawless passions, the cut-throat practices, and the oath-bound societies of their native country, are to us a pest without mitigations,” wrote the editors.

Even Theodore Roosevelt, then a member of the U.S. Civil Service Commission, didn’t see anything particularly wrong with the murders. “Monday we dined at the Camerons; various dago diplomats were present, all much wrought up by the lynching of the Italians in New Orleans,” Roosevelt wrote his sister. “Personally I think it rather a good thing, and said so.”

A monument to Italian American inclusion

In the face of this pervasive bigotry, prominent members of New York’s Italian American community had an idea. With the nation celebrating the 400th anniversary of Columbus’s epic voyage in 1892, followed by the World Columbian Exposition in Chicago in 1893, they saw an opportunity to raise the profile of Italian Americans by associating themselves with this most “American” of Italians. Raising $20,000, they commissioned an Italian sculptor to craft the explorer’s portrait out of the finest Italian marble.

The New York City Parks Department wanted to hide the Columbus statue away in Harlem’s Little Italy, but Italian American leaders convinced Tammany Hall politicians that a prominent position at the southwest corner of Central Park would assure them the Italian vote. The Columbus statue was installed on October 12, 1892, the same day President Benjamin Harrison encouraged widespread observance of Columbus's arrival, calling him a "pioneer of progress and enlightenment."

By 1920, 4 million Italian immigrants had passed through Ellis Island, making up more than 10 percent of America’s foreign-born population—and a powerful voting block. Italian American labor organizations and benevolent societies became instrumental in pushing for the recognition of Columbus Day. Groups like the Sons of Columbus Legion in New York forged relationships with state legislators eager for the immigrant vote, and state after state made Columbus Day an official holiday.

Starting in 1934, Congress issued a joint resolution calling on each American president to designate October 12 as Columbus Day, and Franklin D. Roosevelt was the first to do so. During World War II, Italian American civic groups organized patriotic Columbus Day parades to combat widespread suspicion of Italian Americans as being sympathetic to Mussolini.

But it wasn’t until 1968, with the signing of the Uniform Monday Holiday Act, that Columbus Day was officially designated as a federal holiday celebrated every second Monday in October.

In the early years, Columbus Day wasn't just for Italian Americans, says Connell: “The city government would shut down and everyone would march in the parade. It wasn’t just an Italian American holiday.” But as so-called “white flight” began changing the demographics of America’s cities, Italian American communities began using Columbus Day as a pride parade to compete with St. Patrick’s Day. “The feeling of [Columbus Day] being something that everybody should be involved in was lost,” says Connell.

As modern historians began peeling back the myths surrounding Columbus, they painted a picture of a deeply flawed man who, as the short-lived governor of the island of Hispaniola (now Dominican Republic and Haiti), ordered the enslavement and murder of countless native Taino people there. Having arrived in the West Indies as the international slave trade was heating up, Columbus and his men forced the Taino to work on plantations and mine for gold—and shipped others to Spain to be sold. As governor, he ordered brutal crackdowns on any unrest. And under his rule, according to a book by Bartolomé de las Casas, a Dominican friar who came to Hispaniola on one of Columbus's later voyages, the Spaniards committed savage acts of slaughter, torture and sexual violence against the peaceful Taino.

Columbus's legacy also includes forcing the islands' indigenous people to convert to Christianity and introducing smallpox and other new diseases for which they had no immunity. Between slavery, disease, overwork and famine, it is estimated that the Taino people were reduced from hundreds of thousands at the time of Columbus's arrival to just a few hundred some 60 years later.

Starting as early as the 1970s, calls emerged to replace Columbus Day with Indigenous People’s Day, a day to mark both the persecution and contributions of those who had occupied the continent long before the explorer’s arrival. Native leaders and communities pointed to the long-term negative consequences of Columbus's voyages for indigenous people. Statues of Columbus, including the one in Manhattan, have also been the subject of protests and calls for removal.

Over the decades, as dozens of cities and states passed legislation to abolish Columbus Day and replace it with Indigenous People’s Day, members of the Italian American community have been among the holiday’s fiercest defenders. While groups like the National Italian American Foundation (NIAF) don’t exonerate Columbus for his crimes, they believe that the holiday’s true meaning, Italian American cultural pride, shouldn’t be sacrificed. Today, Americans from all backgrounds discuss and debate the legacy of Columbus and his impact on our world.