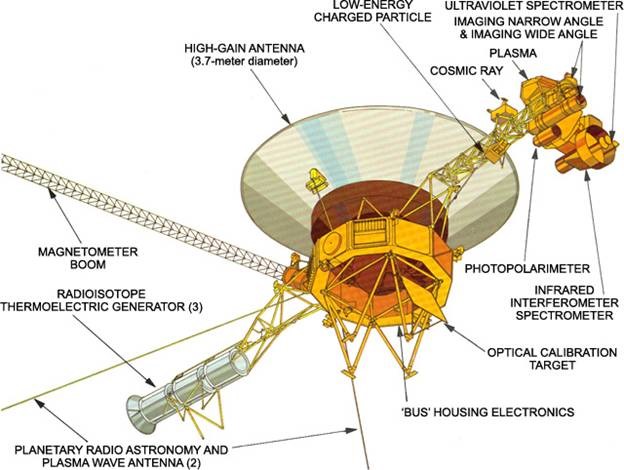 NASA's Voyager 1 was launched after Voyager 2, but because of a faster route, it exited the asteroid belt earlier than its twin, having overtaken Voyager 2 on Dec. 15, 1977 according to solarsystem.nasa.gov/missions/voyager-1/.

It began its Jovian imaging mission in April 1978 when it was about 165 million miles (265 million kilometers) from the planet. Images sent back by January 1979 indicated that Jupiter’s atmosphere was more turbulent than during the Pioneer flybys in 1973-1974.

Beginning Jan. 30, 1979, Voyager 1 took a picture every 96 seconds for a span of 100 hours to generate a color time-lapse movie to depict 10 rotations of Jupiter.

On Feb. 10, 1979, the spacecraft crossed into the Jovian moon system and in early March, it discovered a thin ring circling Jupiter (less than 19-miles or 30 kilometers-thick).

Among the most interesting findings was on Io, where images showed a bizarre yellow, orange, and brown world with at least eight active volcanoes spewing material into space, making it one of the most (if not the most) geologically active planetary bodies in the solar system. The presence of active volcanoes suggested that the sulfur and oxygen in Jovian space may be a result of the volcanic plumes from Io which are rich in sulfur dioxide.

Following the Jupiter encounter, Voyager 1 completed an initial course correction April 9, 1979, in preparation for its meeting with Saturn. A second correction on Oct. 10, 1979, ensured that the spacecraft would not hit Saturn’s moon Titan.

Its flyby of the Saturn system in November 1979 was as spectacular as its previous encounter.

Voyager 1 found five new moons, a ring system consisting of thousands of bands, wedge-shaped transient clouds of tiny particles in the B-ring that scientists called “spokes,” a new ring (the G-ring), and “shepherding” satellites on either side of the F-ring -- satellites that keep the rings well-defined.

During its flyby, the spacecraft photographed Saturn’s moons Titan, Mimas, Enceladus, Tethys, Dione, and Rhea. Based on incoming data, all the moons appeared to be composed largely of water ice.

Images showed a thick atmosphere that completely hid the surface. The spacecraft found that the moon’s atmosphere was composed of 90% nitrogen. Pressure and temperature at the surface was 1.6 atmospheres and minus 292 degrees Fahrenheit (minus 180 degrees Celsius), respectively.

Atmospheric data suggested that Titan might be the first body in the solar system, apart from Earth, where liquid might exist on the surface. In addition, the presence of nitrogen, methane, and more complex hydrocarbons indicated that prebiotic chemical reactions might be possible on Titan.

Following the encounter with Saturn, Voyager 1 headed on a trajectory to escape the solar system at a speed of about 3.5 AU (325 million miles or 523 million kilometers) per year, 35 degrees out of the ecliptic plane to the north and in the general direction of the Sun’s motion relative to nearby stars.

Because of the specific requirements for the Titan flyby, the spacecraft was not directed to Uranus and Neptune.

On Feb. 14, 1990, Voyager 1’s cameras were pointed backward and captured about 60 images of the Sun and planets -- the first "portrait" of our solar system as seen from the outside. The images were taken when the spacecraft was about 40 AU from the Sun (3.7 billion miles or 6 billion kilometers).

The image has also been called the "Solar System Family Portrait"—even though Mercury and Mars can’t be seen. Mercury was too close to the Sun to be seen, and Mars was on the same side of the Sun as Voyager 1, so only its dark side faced the cameras.

These images were the last of 67,000 images taken by the two Voyager spacecraft. Their cameras were turned off to save power and memory for the interstellar mission.

All the planetary encounters finally were over in 1989 and the missions of Voyager 1 and 2 were declared part of the Voyager Interstellar Mission (VIM), which officially began Jan. 1, 1990.

The goal of the new mission is to extend NASA’s exploration of the solar system beyond the neighborhood of the outer planets to the outer limits of the Sun’s sphere of influence, and possibly beyond.

Specific goals include collecting data on the transition between the heliosphere—the region of space dominated by the Sun’s magnetic field and solar field—and the interstellar medium.

On Dec. 16, 2004, Voyager scientists announced that Voyager 1 had reported high values for the intensity for the magnetic field at a distance of 94 AU, indicating that it had reached the termination shock and had now entered the heliosheath. The spacecraft finally exited the heliosphere and began measuring the interstellar environment on Aug. 25, 2012, the first spacecraft to do so.

On Sept. 5, 2017, NASA marked the 40th anniversary of Voyager 1’s launch, as it continues to communicate with NASA’s Deep Space Network and to send data back from four still-functioning instruments -- the cosmic ray telescope, the low-energy charged particles experiment, the magnetometer, and the plasma waves experiment.

Each Voyager carries a message, prepared by a team headed by Carl Sagan, in the form of a 12 inch (30-centimeter) diameter gold-plated copper disc for potential extraterrestrials who might find the spacecraft.

Like the plaques on Pioneers 10 and 11, the record has symbols to show the location of Earth relative to several pulsars.

The records also contain instructions to play them using a cartridge and a needle, much like a vinyl record player.

The audio on the disc includes greetings in 55 languages, 35 sounds from life on Earth (such as whale songs, laughter, etc.), 90 minutes of generally Western music including everything from Mozart and Bach to Chuck Berry and Blind Willie Johnson. It also includes 115 images of life on Earth and recorded greetings from then U.S. President Jimmy Carter (1924– ) and then-UN Secretary-General Kurt Waldheim (1918-2007).

The two Voyagers are now over 11 billion miles (18 billion kilometers) from the Sun and far from its warmth. To ensure the vintage robots continue to return the best scientific data possible, mission engineers in 2019 began implementing a new plan to manage them. The plan involves making difficult choices, particularly about instruments and thrusters on the spacecraft.

During the Jupiter leg of its journey, Voyager 1 explored the giant planet, its magnetosphere and moons in greater detail than the Pioneer spacecraft that preceded it. Voyager 1 also used Jupiter as a springboard to Saturn, using the gravity-assist technique.

Voyager 1 succeeded on all counts Jupiter, with the single exception of experiments using its photopolarimeter, which failed to operate.

Jupiter's atmosphere was found to be more active than during the visits of Pioneer 10 and 11, sparking a rethinking of the earlier atmospheric models which could not explain the new features.

The spacecraft imaged the moons Amalthea, Io, Europa, Ganymede, and Callisto, showing details of their terrain for the first time.

Possibly the most stunning of Voyager 1's discoveries was that Io has extremely active volcanoes, powered by heat generated by the stretching and relaxing the moon endures every 42 hours as its elliptical orbit brings it closer to and then farther from Jupiter. This finding revolutionized scientists' concept of the moons of the outer planets.

The spacecraft also discovered a thin ring around the planet (then making it the second planet known to have a ring), and two new moons: Thebe and Metis.

Voyager 1 was the second spacecraft to visit Saturn. It explored the planet and its rings, moons, and magnetic field in greater detail than was possible for its predecessor, Pioneer 11.

Voyager 1 met all of its goals except for the experiments planned for its photopolarimeter, which failed to operate.

The spacecraft found three new moons: Prometheus and Pandora, the "shepherding" moons that keep the F ring well-defined, and Atlas which similarly shepherds the A ring.

Saturn's largest moon, Titan, was found to have a thick atmosphere which hides its surface from visible-light cameras and telescopes. Spacecraft instruments showed it to be mostly nitrogen, like Earth's atmosphere, but with a surface pressure 1.6 times as high as ours.

The spacecraft also imaged the moons Mimas, Enceladus, Tethys, Dione, and Rhea; revealed the fine structures of Saturn's complex and beautiful ring system; and added the G ring to the list of known rings.

Just as it used Jupiter's gravity to help it reach Saturn, Voyager 1 used a gravity assist at Saturn to alter its course and increase its speed, giving it a trajectory to take it out of the solar system.

In August 2012, Voyager 1 became the first spacecraft to cross into interstellar space.

However, if we define our solar system as the Sun and everything that primarily orbits the Sun, Voyager 1 will remain within the confines of the solar system until it emerges from the Oort cloud in another 14,000 to 28,000 years.

No spacecraft has gone farther than NASA's Voyager 1. Launched in 1977 to fly by Jupiter and Saturn, Voyager 1 crossed into interstellar space in August 2012 and continues to collect data.

Voyager 1 and its sister ship Voyager 2 have been flying longer than any other spacecraft in history.

Not only are the Voyager missions providing humanity with observations of truly uncharted territory, but they are also helping scientists understand the very nature of energy and radiation in space—key information for protecting future missions and astronauts.

Voyager 1 carries a copy of the Golden Record—a message from humanity to the cosmos that includes greetings in 55 languages, pictures of people and places on Earth and music ranging from Beethoven to Chuck Berry's "Johnny B. Goode."

Voyager 1 was the first spacecraft to cross the heliosphere, the boundary where the influences outside our solar system are stronger than those from our Sun.
Voyager 1 is the first human-made object to venture into interstellar space.
Voyager 1 discovered a thin ring around Jupiter and two new Jovian moons: Thebe and Metis.
At Saturn, Voyager 1 found five new moons and a new ring called the G-ring.