What is a Rasher Of Bacon? 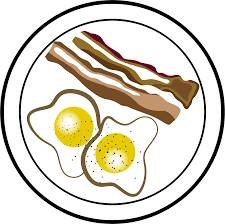 Image: A rasher of bacon and eggs - clipartpanda.com

If you are well read, or you know someone who traveled forward from the 16th century, you may be familiar with the term “rasher of bacon,” but wonder exactly what it refers to. Is this a big hunk of fatback, or what?

Etymologists are not certain about the origin of the word but we can make some pretty good guesses.

Sometimes, the word rasher would be used to refer to breakfast in general. It was used in this way in the naughty slang “A ride and a rasher,” which meant sexual intercourse followed by breakfast.

The word rasher most likely comes from the Latin rado, rasi, rasum, radere, meaning to scrape, shave or scratch. The original spelling of rasher may have been rasure, similar to erasure, from the same root. The word abrade or abrasion also comes from this root, referring to a scrape or scratch.

Also, the word razor, like the tool we use to shave with, along with the word rash, so that “razor rash” manages to combine two words from a common root.

Although the Latin origin is fairly likely, a common belief is that A “rasher of bacon” was called thus because of the rapidity or “rashness” with which it could be prepared, such as when unexpected guests showed up and you threw a rasher of bacon in a pan and fried it up real quick. This assumption is probably a bit rash, though.