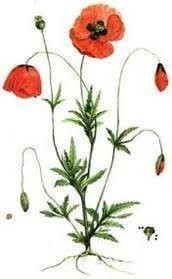 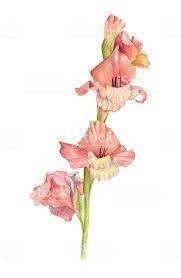 The July birth flowers are the gladiolus and poppy.  Here, gleaned from a variety of sources are the facts and fancy of these gorgeous flowers.

The gladiolus is sometimes referred to as the sword lily because of its long, skinny shape. The bold bloom can be found in an assortment of colors including red, pink, orange, yellow, purple and white and it’s a symbol of strength of character, remembrance and sincerity.

The gladiolus is the August birth flower. As one of the most colorful summer flowers, the gladiolus is unique in that its flowers grow from a tall spike lined with sharp leaves. It’s nickname “sword lily” comes from its Latin name “gladius” meaning sword, and refers to the shape of its leaves.

When offered as a gift, the gladiolus symbolizes love at first sight and that the gift giver’s heart is pierced with love. The August birth flower is also known as the flower of the gladiators. During Ancient Rome, gladiators would fight “to the death of gladioli” and the crowd would cover the winner in colorful gladioli flowers. Therefore, the gladiolus can also be a symbol of moral character and honor.

Gladioli are known to symbolize strength of character, faithfulness, integrity, infatuation, and persistence. Beyond these meanings, the birth flower for August carries other meanings that differ by color.

The ancient name for the Gladiolus flower was Xiphium coined down from the Greek word Xiphos, which means a sword.

The British and Mediterranean Gladiolus plants were earlier used for medicinal purposes. For instance, the plant’s corms or stem base were used as a bandage and to extract thorns.

Some parts of the Gladiolus plants are poisonous and may also cause allergic reactions or skin irritations.

The English used to mix the Gladiolus plant’s stem base with goad’s milk to soothe the symptoms of colic.

The poppy is known for its bright red color. It is worn on Armistice Day in countries like the United Kingdom, Canada and France, as a symbol of remembrance for those that lost their lives in World War I. The poppy also symbolizes imagination.

Let but my scarlet head appear
And I am held in scorn;
Yet juice of subtle virtue lies
Within my cup of curious dyes.
Christina Rossetti, Consider the lilies of the field

The poppy’s symbolism is double-edged: it stands for sleep and repose, but also for intoxication and death. Each of those poppies in the Flanders fields is the soul of a departed soldier, and in The wizard of Oz, Dorothy is lulled to sleep by a sinister field of these flowers. And yet it’s hard to think of this dark side when you see acres of nodding scarlet poppies on the railway embankment during your morning commute.

Traditionally, the red poppy flowers are considered as a symbol of remembrance. In Ancient times, the Greeks and Romans used to offer poppy flowers to the newly dead and wish them to rest in peace. In Japan and China, red poppy means a passionate love between a couple.

The Minoans, a civilization based around Crete are known to have cultivated poppies even before 2700 BCE.

The Poppy flowers grew in many fields of the Flanders and Belgium where battles took place. The red poppies symbolize the blood spilled during the war.

During the World War One, the poppies disappeared because of the bombing of the battlefields and the destruction caused during the War prevented poppies growing for four full seasons.

The culinary poppy seeds are a rich source of minerals, calcium, and iron which are derived mainly from the opium poppy.