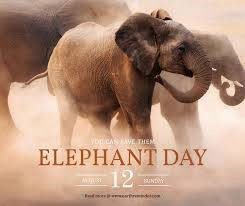 World Elephant Day is an international annual event on August 12, dedicated to the preservation and protection of the world's elephants according to wikipedia.org. Conceived in 2011 by Canadian filmmakers Patricia Sims and Michael Clark of Canazwest Pictures, and Sivaporn Dardarananda, Secretary-General of the Elephant Reintroduction Foundation in Thailand, it was officially founded, supported and launched by Patricia Sims and the Elephant Reintroduction Foundation on August 12, 2012. Since that time, Patricia Sims continues to lead, support and direct World Elephant Day, which is now recognized and celebrated by over 100 wildlife organizations and many individuals in countries across the globe.

The first World Elephant Day was held on August 12, 2012. The film Return to the Forest, narrated by William Shatner, is about the reintroduction of captive Asian elephants to the wild and was released on the inaugural World Elephant Day. The follow-up feature film When Elephants Were Young, also narrated by Shatner, depicts the life of a young man and young elephant in Thailand.

The demand for ivory, which is highest in China, leads to the illegal poaching of both African and Asian elephants. For example, one of the world's largest elephants, Satao, was recently killed for his iconic tusks. Another iconic Kenyan elephant, Mountain Bull, was also killed by poachers, and with the street value for ivory now exceeding that of gold, African elephants face a poaching epidemic. Elephants are also poached for meat, leather, and body parts, with the illegal wildlife trade putting elephants increasingly in danger, because it is perceived to be a low risk and high profit endeavor. Poachers are often considered trained for this activity due to the amount of tools needed to be transported as well as the large size of these animals.

The loss of habitat due to deforestation, increases in mining, and agricultural activities has become problematic, especially for Asian elephants. The fragmentation of habitat also creates isolation – this makes breeding more difficult, and allows poachers to find the elephants and set traps more easily. Asian elephants have lost nearly 30-40% of their habitat, making it incredibly difficult to maintain their offspring and themselves.

Human-elephant conflict is a significant concern, as human populations increase and forest cover decreases, forcing elephants into close proximity with human settlements. Incidents include crop damage and economic losses, as well as both elephant and human casualties.

A lack of legislation regarding the care and treatment of elephants in zoos, circuses, and tourism often leads to their mistreatment. Captivity can be a serious threat to elephants, and Asian elephants are often illegally captured in the wild and trafficked into the lucrative tourism industry.