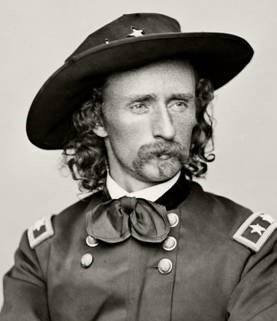 General Custer was a renowned United States Army officer and cavalry commander for the Union Army during the American Civil War and the American Indian Wars according to pastfactory.com. He worked closely with some of the most prominent commanders of his time, who noticed Custer’s natural ability and mind for warfare. He quickly rose in the ranks and became one of the most recognizable faces of the Union war effort. Yet, he is best remembered for his actions at the Battle of Little Bighorn. There, he and all of his command were killed by Native Americans in what has grown to be known as “Custer’s Last Stand.” Now, take a look into who this decorated soldier was and what separated him from the others during his time.

He Was Known For Keeping Up His Appearance

Regardless that Custer had a rather dirty job as a soldier, he always made sure that he looked good. He was known to be flamboyant with his style, almost always wearing a black velvet uniform with coils of gold laces, spurs on his boots, a broad-brimmed sombrero, and a red scarf around his neck.

As if that wasn’t enough, he also liked to show off his golden curls and would perfume his hair with cinnamon oil.

He Was A Hard Man To Kill

Considering all of the massive battles and bloody military campaigns that he led, it was a miracle that he lived as long as he did. Not only did he not die, but he also managed to avoid serious injury, despite his daring charges and having eleven horses shot out from under him.

It wasn’t long before the phrase “Custer’s luck” began circulating among the troops. Unfortunately, his supposed luck ran out during his last stand at Little Bighorn.

He Graduated Last In His Class At West Point

Although Custer made a name for himself while serving in the army, he wasn’t the greatest student while attending the United States Military Academy West Point. During his time there, he earned the nickname among his fellow cadets as the “dare-devil of the class,” dedicating his time to pranks and tomfoolery rather than his academic studies.

His behavior usually resulted in extra guard duty on Saturdays, although he did graduate. However, when he left the academy in 1861, he was the lowest-ranking cadet known as “the goat.”

You won’t believe what he was gifted for his service during the Civil War.

Although Custer’s wife spent the remaining years of her life writing stories about her deceased husband’s valor, William “Buffalo Bill” Cody also helped cement his name in history. Buffalo Bill had scouted for Custer at one point, and weeks after the Battle of Little Bighorn, he killed and scalped a Cheyanne warrior named Yellow Hair, claiming it was “the first scalp for Custer.”

Bill would later incorporate Custer’s Last Stand into his theater routine titled “Custer’s Last Rally,” which even included some of the Native Americans that had been present at the battle.

He Was Portrayed By Ronald Reagan

Before Ronald Reagan became the 40th President of the United States, he made a name for himself in Hollywood. In 1940, he played the role of a young Custer in Santa Fe Trail. He starred opposite to Errol Flynn, who played J.E.B. Stuart, hunting abolitionist John Brown in pre-Civil War Kansas.

Although the film was successful at the box office, it was riddled with historical inaccuracies, not that most audiences cared. Just a year later, Flynn would star as Custer in They Died With Their Boots On.

He Was The Youngest Civil War General In The Union Army

While Custer may not have been the best student while attending West Point Academy, his mind for combat was proven on the battlefield. Following his graduation, Custer joined the Potomac Army, one of the most significant forces in the Union Army. There, he made a name for himself with his cavalry charges, leadership style, and tactical skill.

At the young age of 23, Custer was promoted to the rank of brigadier general, making him the youngest in the army. He earned his nickname “Boy General” for his valor during the Battle of Gettysburg, and by the end of the war had risen to major general.

He Wasn’t The Only Custer To Die At Little Bighorn

On June 25, 1876, Custer’s force of over 200 men, including himself, met their fate at the Battle of Little Bighorn. On that day, the combined forces of the Lakota, Northern Cheyenne, and Arapaho tribes fought against the 7th Cavalry Regiment of the United States Army. Custer and his men were decimated by the Native Americans, which is now referred to as Custer’s Last Stand.

However, General Custer wasn’t the only member of his family to die on the battlefield. There were four other members of the Custer family, including his 18-year-old nephew Henry Lee, brother-in-law James Calhoun, and his two younger brothers Boston and Thomas.

In 1874, Custer led an expedition into the Black Hills. While traveling near the French Creek near what is now Custer, South Dakota, he stumbled upon gold, which he announced to the public.

In response, Custer’s announcement sparked what is now known as the Black Hills Gold Rush. This led to the development of the area, including the town of Deadwood, South Dakota, which grew in notoriety for its lawlessness and attracted some of the biggest Old West figures of the time.

After being defeated at Appomattox Courthouse, Confederate General Robert E. Lee signed his official surrender on a table in a house near the battlefield. Although nobody thought much of the table at the time, it eventually fell into the hands of Custer’s wife, Elizabeth.

Although the table originally belonged to General Sheridan, he ended up giving it to Custer for his services during the war. Elizabeth lived until 1933, and when she died, she bequeathed the table to the Smithsonian Institution.

His Body Was Not Harmed By The Native Americans

Although it was common for both the Native Americans and the United States military to scalp each other or worse while in conflict, no such harm was done to Custer. While many of Custer’s men had their bodies mutilated by the Native Americans, when Custer’s body was recovered, it was surprisingly untouched.

This is most likely because Custer had been a noble adversary to the Cheyenne for years and left his body alone out of respect. His brother Tom was also found, and the two were buried side by side in a shallow grave. Custer was later reburied with full military honors at West Point.

There’s A Debate Over His Death

Although there’s no debate whether Custer died at the Battle of Bighorn or not, there is about how he actually died. One of the most notable was that he was killed by a Cheyenne female warrior.

The story goes that during the battle, she knocked him off his horse and delivered a fatal blow while he was on the ground. However, according to a soldier that inspected Custer’s body, he had been killed by a rifle shot from a far distance judging by the bullet holes around his heart and his temple.

His Nickname Was “Autie”

Custer was born in New Rumley, Ohio, on December 5, 1839, to Emanuel Custer and his second wife, Marie Ward Kirkpatrick. He had two younger brothers Tom and Boston, a younger sister named Margaret, and an older brother, Nevin.

He also had three older half-siblings. As a boy, he couldn’t pronounce his middle name, Armstrong, so his family jokingly gave him the nickname “Autie.” This name would stick with him for the rest of his life, with his wife using it as a term of endearment.

He Wasn’t Always Going To Be A Soldier
If General Custer had followed through with his first occupation choice, chances are that he would have passed away at a ripe old age rather than being killed by Native Americans in battle. At 16 years old, he attended Normal School and earned his grammar school teaching certificate by the next year.

Unsurprisingly, considering Custer’s personality, teaching bored him and he enrolled in West Point in 1857. On top of that, in his even younger years, his mother hoped that he might join the clergy.

He Almost Didn’t Fight In The Campaign That Killed Him
While Custer was set to lead the 7th Cavalry in its campaign against the Sioux in the spring, things got complicated when he ran into some controversies involving the President of the United States, Ulysses S. Grant. At a Congressional hearing in Washington D.C., Custer implicated several members of Grants administration, including Grant’s brother.

Furthermore, Custer caused more damage by leaking information to the press. This resulted in Grant removing Custer from his command and briefly arresting him. It was only after several high-ranking generals became involved that Custer was returned to his post.

He Was Court-Martialed Twice

While still attending West Point, Custer was court-martialed and given a light punishment for his failure to stop a fight between two cadets when he was an officer of the guard. Then, in 1867, for a much more severe matter, Custer was court-martialed when he was convicted of eight charges, including prejudice of good order and military discipline, and absence without leave of command.

He was then suspended from rank and command without pay for a year. Nevertheless, General Philip Sheridan reinstated him to lead a military campaign against the Cheyenne.

He Played A Key Role In The Battle of Gettysburg
Custer was a major player in the decisive Battle of Gettysburg between July 1-3, 1863. He managed to prevent General J.E.B. Stuart from attacking Union troops while also later capturing Confederate troops retreating south after the battle had been won.

However, it came at a cost. His brigade lost more than 250 men, the highest of any Union cavalry unit. As the war went on, it was clear that Custer continued to lose more men than anyone else.

He And His Wife Met As Children

When they were just children, Custer and his future wife Elizabeth “Libbie” Bacon met in Michigan. However, the two didn’t fall in love until Custer returned home on leave in 1862.

Libbie was from a wealthy and prominent local family, and at that point, Custer hadn’t made a name for himself. Despite her father’s disapproval, the two married in December 1864. The couple had no children and instead dedicated their time to cultivating Custer’s fame.

He Didn’t Always Get Along With His Troops

Both during and after the Civil War, Custer had some troubles with the troops that he commanded. Many of the men saw him as being hot-headed and being reckless with their lives, as long as he got the fame and recognition that he so much desired.

It came to the point when he considered leaving the army to pursue a career in business and even possibly run for office. Yet, when a new 7th Cavalry Regiment was raised to help control the West, Custer assumed command as a lieutenant colonel.

He Was Of German Descent
Custer’s family is initially from Germany, with their name originally being spelled “Kuster.” His family most likely hailed from the Palatine region in West Germany. Many of the Palatines had to flee Germany because of the contrast conflict in the early eighteenth century and ended up immigrating to countries such as England, Ireland, and America.

Their family anglicized their name in the eighteenth century, with Custer being named George after his family’s pastor and close friend.

His Image Has Changed Over Time

Both during his life and after his death, General George Custer was seen as a larger-than-life figure. Over time, he has become a household name and is a regular character in popular culture.

However, in recent years, his image has changed from a war hero and a gallant Indian fighter to a racist and bloodthirsty killer. While most historians admit he was neither right or wrong in a number of his actions, the events at Little Bighorn are still hotly debated.