22 Insults We Should Bring Back 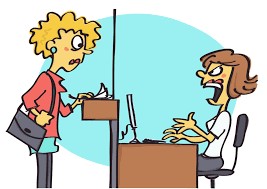 
Dictionary.com is an awesome site that can define just about any word. Here, from the archaic side of the site are insults our ancestors might have used!

Gobermouch is an old Irish term for someone who likes to meddle in other people’s business. Everyone knows a busybody, right? Don't let your gobermouch-in-law or next-door gobermouch have any more control over you than they already do. Shut the blinds and privatize the social media.

Gnashnab is an 18th century northern English word, meaning "someone who [just] complains all the time." Contemporary synonyms include nitpicker, moaner, and grumbler. It's just as true now as it was back then—no one likes a gnashnab.

A snoutband is someone who always interrupts a conversation to correct or contradict the person speaking. Every social group has a snoutband, who thinks they know everything. They probably don't know the meaning of this word, though. At least, not yet.

Stampcrab is someone who's clumsy and heavy of foot would be considered a stampcrab. Make way for the office stampcrab, especially if you just poured yourself some coffee.

Scobberlotcher this word is "probably derived from scopperloit, an old English dialect word for 'a vacation or a break from work'." A scobberlotcher is someone who avoids hard work . . . like it's their job. The next time you catch someone dozing off at their desk, hit 'em with this one, even if it is just under your breath.

Whiffle-Whaffle is someone who wastes a lot of time. You could easily make the case that a scobberlotcher is also a whiffle-whaffle, correct? And, you most definitely don't want to work with either of them.

Zooterkins is "a 17th-century variant of zounds, which was an expression of surprise or indignation." It's less of an insult and more of something to yell after someone has insulted you. And, of course, to really pour salt on the wound, you can follow up with some other great words from this list.

Zounderkite is a Victorian word meaning "idiot." An appropriate example with a contemporary angle (spoken with some irritation while driving on the highway): "That zounderkite just cut me off!"

Bedswerver coined by Shakespeare, this one describes an adulterer. BBC America thinks this would make a great band name, and they are totally on the mark. You're at the show, the lights go down, and suddenly through the swirling fog and darkness you hear “Good evening Cincinnati, how ya doing? We are . . . Bedswerver!”

A fopdoodle is someone of little significance. So, if you're letting someone get on your nerves who really shouldn't have the power, remember that they're just a fopdoodle. Then, carry on.
Klazomaniac would be a person WHO CAN ONLY SPEAK BY SHOUTING. That's all we're going to say ABOUT THAT!

Cumberworld may sound somewhat like the name of a theme park, or perhaps actor Benedict Cumberbatch's home, cumberworld was a term used to denote a person that was totally useless (just like fopdoodle). They're taking up your space and they're breathing your air. Be off with you.

Raggabrash is someone who is absolutely, completely disorganized or really, disgustingly grubby. That's raggabrash. Example: "That boy is a total raggabrash!" Think of it as a nicer way of saying "nope, not for me," since most folks will be left scratching their heads on this one. But you won't, since you just read this.

Smellfungus
Anytime you invoke a smell of some type, you're mining insult "gold." There's a great backstory here, too. According to a piece in Mentalfloss, author Laurence Sterne met author Tobias Smollett in 1764. Sterne was struck by how critical Smollett was of the places he visited. Afterwards, Sterne would then go on to publish a book called Sentimental Journey Through France and Italy, and it included a character by the name of Smelfungus, who always griped and moaned.

One smell-word is good, but two are great. And, that leads us to smell-feast. Say you've laid out a big dinner for some invited guests. Knock knock, someone at the door. Oh, look. It's an uninvited guest, and they're expecting to have a slice or two of that fine roast beast on the table. This freeloader is known as a smell-feast. They probably didn't bring a bottle of wine, either.

If you were known as a flibbertigibbet, it meant you were "a nosy, gossipy sort." It also applied to a "flighty or frivolous woman," though for the record we will state this one can apply to "flighty or frivolous men," too. The word is also meant to be an imitation of what mindless chatter actually sounds like. At one point, it also referred to a devil or a fiend of some type. Lots to work with here.

Foozle
You'd probably hear this one coming out of the home of an old married couple. "Ye olde foozle, ye forgot to lock the door again!" The word foozle means "a conservative, out-of-date person, especially an old man; dodo, fogy." Fair enough. You can also use this word to imply a bungled effort on someone's part. Say your first shot off the 18th tee landed in the lake. Well, ya foozled that one.

A mafflard is a term for someone who is a pure klutz. The website "Words and Phrases From The Past" calls a mafflard: "a stammering or blundering fool; a term of contempt." Sounds like that mafflard in your life might be good friends with the raggabrash you met last week.

Shot-clog
You know that one person who always tags along on group outings . . . and you really don't want them there, but you feel bad and they usually pick up the tab. Well, that person is known as a shot-clog. Shot refers to the bill, and the clog part is derived from a weight attached to an animal's leg that is used to impede their progress. Bottom line: This shot-clog may bring some of the group down, but they offer to pay the bill so . . . another round for everyone!

Rakefire invokes the image of a sleek red sports car, right? But, we'll defer to BBC's definition of a rakefire for the real insult. This is "someone so uncool that they would outstay their welcome in someone’s house until long after the fire had burned down to just the last few embers." And, if they get up and sneak into the kitchen late at night for a cold turkey leg, they're a smell-feast, too.

Mumblecrust isn't a terribly flattering term. Although, if you are in fact a mumblecrust, you probably don't care if you're thrown this insult—you've got bigger issues. The word refers to a toothless, haggard beggar (as portrayed in a medieval comedy show).

Muckspout
We have all probably spent some time around one of these people. You will typically find them at sporting events or hunched in front of the TV watching NFL games on Sunday, spilling beer. A muckspout is someone who simply curses too much.