Explaining The Psychology Behind Why People Believe Aliens Exist 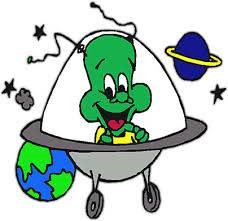 Information from a highly anticipated report from American intelligence officials on unexplained aerial phenomena has been leaked, and it has an interesting conclusion according to yahoolifestyles.com. While the U.S. government hasn't found evidence that strange flying apparatuses spotted over the years are alien spacecraft, they also say that they can't rule it out.

The report, which is expected to be released to Congress in an unclassified version by June 25, also says that more than 120 accounts of unidentified flying objects do not appear to be evidence of secret U.S. technology, but also doesn't eliminate the possibility, officials who were briefed on the document told The New York Times. Still, they don't offer an explanation for the sightings, which include a video that showed a sphere-shaped object flying over water near San Diego, Calif., that disappeared into the water after a few minutes.

Former Navy pilot Cmdr. Dave Fravor described one 2004 incident to NBC News. "As soon as we looked down, we see the whitewater, and then we see this little white Tic Tac,” Fravor said. “It’s pointing north-south and it’s just going forward, back, left, right." Fravor said he got within a half-mile of the ship before it suddenly vanished.

Reactions on social media have been mixed, with some saying the report reveals nothing, while others accuse the government of covering up the existence of aliens.

Belief in aliens has persisted for centuries, and one-third of Americans believe that UFOs people have spotted have been alien spacecraft visiting Earth from other planets or galaxies, according to a 2019 Gallup poll. And, while 60 percent think that unusual sightings can be explained by human activity or natural phenomena, 7 percent say they're unsure. Another Gallup poll found that 68 percent of people believe the government knows more about UFOs than it reveals.

"It's important to distinguish between the questions, 'Do you believe aliens exist?' and 'Do you believe aliens have ever visited the earth?'," Christopher C French, head of the Anomalistic Psychology Research Unit at the University of London, tells Yahoo Life. "Many scientists would answer 'yes' to the first question, while making it clear that to date we have no proof of that, and 'no' to the second question, because they would find the evidence put forward to support visits from extraterrestrials unconvincing."

But what makes someone believe that aliens exist? Experts say there's more to it than many people think.

Clinical psychologist John Mayer, author of Family Fit: Find Your Balance in Life, tells Yahoo Life that he has "known and treated many people over the years that believe in aliens" and found that they are often surrounded by other people who share the same view. "Thus, they are reinforced by their beliefs," he says.

French agrees. "Environment plays a huge role in determining levels of belief in alien visitation," he tells Yahoo Life. Meaning, if your family and friends believe in aliens, you're likely to do the same.

The way newspapers, TV news and social media talk about aliens matters. "Research shows that the way the media presents information on this topic can affect level of belief," French says. If you're constantly reading reports about mysterious flying objects that scientists can't explain, you're more likely to think there may be more to the story, he says.

And, when reputable sources like The New York Times cover aliens, it can have sway as well, Mayer says. "Reports from reputable sources ‘enables’ this thinking," he says. "Such reports can lock in your thinking because your beliefs are not being refuted."

French says that it's "understandable" that intelligence and military services would be interested in reports of strange things in the sky. "They are primarily interested in potential threats to national security," he says. But knowing that the government is investigating reports of UFOs will often reinforce to some people that aliens exist.

"As even UFOlogists admit, 95 percent-plus of all UFO sightings can be readily explained in mundane terms if investigated," French says. "Some get very excited about the few cases that can't. But maybe we just need to accept that sometimes there will not be enough evidence to form a definite conclusion. That does not automatically mean it was ET. After all, we do not expect the police to be able to solve every single crime they investigate, do we?"

The need to believe in a higher power can fuel viewpoints.

For some people, belief in a higher power means turning to religion; for others, it's believing in aliens. Mayer says that a "strong personality characteristic" of people who believe in aliens is "a person’s need to believe that something exists beyond the earthly reality they are experiencing."

"For these individuals, their life is not fulfilling enough — they are searching for something more to fill the void inside them," he says.

But French says that the desire to know whether we're alone in the universe is "perfectly understandable."

"As Arthur C. Clarke famously said, 'Two possibilities exist: Either we are alone in the universe or we are not. Both are equally terrifying,'” he says.