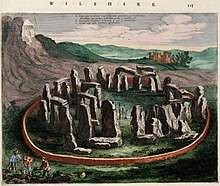 Archaeologists have spent decades trying to uncover the origin of the massive stones that make up Stonehenge according to hermoments.com. The strange formation is one of the oldest mysteries known to man, up there with the Great Pyramids of Giza. But it wasn't until a recent breakthrough that experts finally cracked the case to this ancient mystery.

Withstanding the Test of Time

With the first henge being built roughly 5000 years ago, Stonehenge is one of the oldest archaeological sites in human history. Dating back 500-1000 years longer than the Great Pyramids of Giza, it has puzzled archaeologists for generations.

The majority of the stones that make up the large pieces of standing and fallen henges are called "Sarsen" Stones. Similarly to the pyramids, scientists and archaeologists are baffled about where the stones came from and how they were moved. But a recent breakthrough changed that.

One of the main obstacles to modern scientists has been strict preservation laws in Britain that protect Stonehenge as a historic site. This prevented them from using modern technology to analyze samples of the stones' inner core. But one man's good deed changed everything.

In 1958, restorations were done to Stonehenge to return the monument to its former glory. In the process, the restoration team moved some fallen sarsen stones back up to their perched spots above larger standing sarsen stones. Talk about heavy lifting!

In order to reinforce the standing sarsen stones to hold the smaller sarsen stones up, restoration workers had to drill holes into the base stones and extract chunks of the core to install metal rods.

One of the restoration workers was a fan of history and decided to keep a piece of the core samples that were removed for the metal reinforcement. Little did he know that he held the key to a mystery that wouldn't be solved for another 62 years.

At the age of 90, the stone worker decided it was time to return his interesting souvenir. Little did he know he would be giving scientists the final piece of the puzzle that had stumped them for decades. Talk about a stroke of good luck!

Scientist Got To Work

Scientists immediately got to work analyzing the core sample in an attempt to answer one main question: Where did the stones come from? What they found changed everything...and led to even more questions.

Researchers performed non-destructive chemical analysis on the core sample in order to determine the origin of the stone. They already knew which stone it came from and needed to determine what elements made up the sample. What they found was a major breakthrough.

Scientists were able to identify a host of various elements within the core sample. This allowed them to match it to other stones within Stonehenge as well as search databases for other areas within Britain where the same elemental combination could be found.

After examining the core sample, scientists realized that there was a very particular area that had a similar geochemical makeup to the sarsen stones. It was a major breakthrough that allowed them to pinpoint the origin of the stones after years of research!

Researchers were puzzled by what they found. They expected the geochemical makeup to reveal a wide range of origins, but in fact the vast majority of the large sarsen stones came from one region — The West Woods in Wiltshire, a 40-minute drive away.

Scientists did not expect the sarsen stones to be from so close by. The previous discovery that the smaller "blue stones" littered among the sarsen stones came from Wales, much further away, had blown the minds of many scientists. They wondered how ancient stone workers accomplished this.

Part of the Mystery

Presumably, the late Stone Age people were able to accomplish such a feat using simple tools made of rock, bone, and wood. When you think about it that way, it makes a lot of sense that the sarsen stones would be from close by.

Things Tend to Add Up

"We can now say, when sourcing the sarsens, the over-riding objective was size — they wanted the biggest, most substantial stones they could find and it made sense to get them from as nearby as possible," said Susan Greaney, an English Heritage Historian.

The close proximity of the sarsen stones led researchers to wonder why the blue stones were sourced from so much further away. After all, there must have been stones somewhere closer than over 100 miles away.

"This is in stark contrast to the source of the bluestones, where something quite different — a sacred connection to these mountains perhaps — was at play," Greaney said about why the blue stones came from so far away. Stonehenge has definitely had a mystical attraction for generations.

On July 29, 2020, researchers finally confirmed their findings and the age-old mystery was resolved. The findings were published in the journal Science Advances, adding to the catalog of other studies that determined the source of the smaller stones. But the ancient relic will always inspire a sense of wonder to the public.

One of the highest trafficked times of the year is the summer solstice. Photographers, tourists, and Stonehenge mega fans all come together for an incredible view at sunrise. In fact, this may have been the intention of the original builders of the prehistoric monument.

Some researchers believe that Stonehenge may have served as a tool for ancient astronomers due to the fact that it aligns perfectly with the sunrise during the summer solstice and with the sunset during the winter solstice. Now archaeologists wonder if other sites in the region have such massive functions.