America's Had One 'Unconventional' Colony That History Books Don't Ever Mention 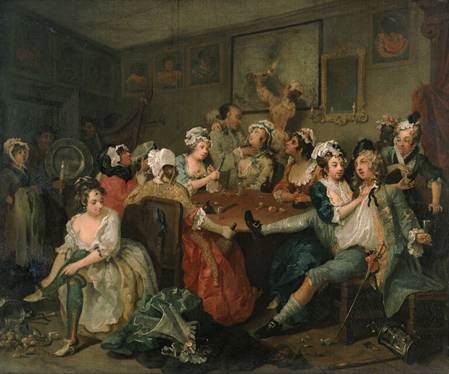 The colony of Merrymount is not mentioned in many history books according to regencytimes.com. The arrival of Puritan colonizers brought ruin to surrounding indigenous tribes, but it was different with this settlement. Their approach was to bond with local Algonquians. That wasn't all. The colony rejected Puritan values carried over from England and even celebrated pagan traditions. In other words, Merrymount was not your average colony...which meant it didn't last too long.

In modern-day Quincy, Massachusetts, the former colony of Merrymount has transformed into an ordinary neighborhood. Upon visiting, the city's New England charms are obvious, with its seaside views and colorful past. But those charms also conceal a complicated history. Few traces remain regarding Merrymount's controversial origins.

Beyond being the birth place of President John Adams, the city of Quincy has a more obscure place in history. Back in the 1600s, the neighborhood of Merrymount had been a "hippie" colony of sorts. Of course, this came about at a time when peace and free love were unheard of.

It all began with Thomas Morton. In his late-40s, with a background in law, Morton set sail to New England in 1624. He was accompanied by Captain Richard Wollaston and over twenty indentured servants. They founded a settlement dubbed Mount Wollaston, though not everyone was happy in their new home.

Despite escaping religious persecution themselves, the Puritan leaders were religious zealots intolerant of any outside ideas. On top of that, living conditions were brutal, and the sale of slaves and indentured servants was also common. Morton and some of his supporters figured there was a better way.

Morton had little patience for these conservative ideas. Though he came from a religious background, he grew to love the fine arts and wild parties as a young man. Morton also saw much of the world, leading him to accept multiple ways of life. But the Puritan way was not one of them.

So, Morton and company cut ties with the Puritan hub of Plymouth. They ended up trading more with the Algonquin tribe, who weren't often treated well by European settlers, more than their own countrymen. The Wollaston residents also drew up their own laws that broke every English rule and custom in the book.

Neighbors were shocked to see the events unfold. For one thing, the free thinkers did away with bondage. Under the command of Morton, who was called the community's "host," all of the indentured servants were freed. They also renamed their community Merrymount, perhaps due to a controversial structure in the town square.

The colony's name could have symbolically referred to the towering pole set up in the community's center. With its height, it was an easily spotted marker. But the Puritans might have worried about it for another reason.

It could very well have been a maypole, an activity often used in celebrations often associated with paganism. Morton, notwithstanding his Anglican roots, was from Devonshire, a county steeped in history of the pre-Christian religion. And this pagan-like pastime turned quite a few heads.

Massachusetts native and famed author Nathaniel Hawthorne later wrote about the escapades that occurred in Morton's colony, albeit generations after the fact. In 1832, his short story "The May-Pole of Merrymount" detailed a wedding in Morton's unorthodox community.

In describing Morton and his community, Hawthorne likened them to "a crew of Comus." From Greek mythology, Comus was a god of festivity, where men and women could celebrate his festivals by exchanging clothes. That comparison indicated that Merrymount probably wasn't abiding by strict gender roles.

In Merrymount, same-sex relationships weren't frowned upon and Morton encouraged both platonic and romantic relationships with nearby Algonquian tribes. Both enraged the Puritans greatly. Their traditional values were being threatened.

During colonial times, while the labels "gay" and "queer" did not exist yet, same-sex relationships were not rare. They were so frequent, in fact, that "sodomy" laws created by the Puritans had to be weakened. Punishments included being branded and placed in the stocks.

After all, for these pilgrims, sex was not for pleasure. Its purpose was to increase reproduction, as infant mortality rates up were very high. The Puritans' goal was to ensure their population and pious way of life didn't die out. At the same time, they didn't want to punish offenders too harshly, as they didn't want to diminish their own manpower.

But Merrymount threatened Plymouth by completely ignoring its laws altogether while managing to thrive. Additionally, Morton made a push for inclusion with the Native American tribes, allowed a melting pot of diversity to occur. They didn't simply make trades. They formed bonds.

Furs and food weren't the only items being traded. The Puritans at Plymouth learned that firearms were being sold as well. They feared an armed uprising was possible if they didn't stop it in time. Then there were the more subtle dangers.

The leaders at Plymouth became more anxious that their fellow men would fall to the "savage" ways of the indigenous tribes, as the population of Merrymount had seemingly done. Meanwhile, it was also obvious that the mainstream Puritans envied Morton's prosperity.

With Merrymount's values seen as being completely opposite of those at Plymouth Plantation, the colony was on a countdown. Rival Puritan communities, suffering from hunger, raided the Merrymount food cache, and residents soon fled to other villages for safety. By 1630, barely five years in its creation, Merrymount met its end.

Morton was arrested and sent back to England. The erected maypole was destroyed. The community's name was changed to Mount Dagon. When no trial was scheduled, Morton escaped any repercussions. Of course, his reputation was never the same after. Morton later returned to Plymouth, where he was treated as a seditionist.

He then died in prison, though not without making his mark. Merrymount's open-mindedness and embrace of other cultures add a new layer to how we view Puritan history. Though it surprises us to hear that some early American settlers were more progressive, it actually wasn't all that uncommon.

Not too long after Morton's time, Benjamin Franklin's dark and "scandalous" habits caused quite a stir. Even Benjamin Franklin’s childhood was a little unusual: his parents had 17 children total, with Ben as the fifteenth and final boy born to the family. From a young age, he helped out his parents with the family trade, which was soap and candle-making.