A Brief History of Napkins, From Soft Dough to Paper 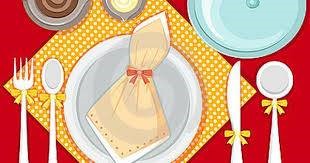 They’re currently under threat from paper towels according to atlasobscura.com.

The first napkin was edible.

We can thank the Spartans in Ancient Greece for that. In those days, they ate everything by hand. That led to the common use of a soft dough to clean off the fingers, a food object called apomagdalie.

“Table cloths and napkins were unknown; the place of the latter was taken by soft dough, on which the fingers were rubbed,” explains 19th-century archaeologist Hugo Blümner in The Home Life of the Ancient Greeks. “At large banquets, sometimes towels and water for washing the hands were handed round between the courses, and this was always done at the end of a meal. The practice of using the fingers for eating made this indispensable.”

The Romans also introduced two kinds of cloth for napkin-related purposes—the sudarium, a “sweat cloth” of sorts for the face, and the mappa, a large cloth for eating while reclining.

Paper, which is said to originate from China, found one of its earliest uses as a napkin in the second century AD, according to researchers Joseph Needham and Tsien Tsuen-Hsuin, who write that napkins folded into squares were used inside of baskets that held tea cups.

Of course, the Middle Ages had a way of recalibrating things. For a while in Europe, there weren’t really napkins at all. People wiped their hands and faces with bread, their shirts, whatever else was around. Napkins eventually came back in a big way and added an air of formality to many settings—particularly as a variation of tablecloth called a surnape, which those of sufficient status received at their table places. These cloths eventually made it to less formal settings, too.

A big turning point for the role of the napkin actually might have been the fork. In an 1887 edition of Good Housekeeping, writer Albert Aylmer noted that the fork, which took a while to gain acceptance in Europe, made the napkin a bit less essential for most meals.

“The introduction of the fork, however, caused eating to become so cleanly a process, especially in contrast to the recent past, that the napkin no longer held its ground as an article of use, but became merely an ornament and a thing of ceremony,” he explained. “It was found that, with a little care, one could retire from the table without the necessity for cleansing the hands.”

It wasn’t the first time the napkin took a hit to its reputation—and it wouldn’t be its last, either.

As for paper napkins, those didn’t develop as an industry until the late 19th century, thanks to the help of the Japanese market.

It started in 1887, when souvenir table napkins took off in the United Kingdom, particularly in the U.K. After the British firm John Dickinson Ltd. acquired decorated napkins from Japan, it overprinted logos and other marketing-related information on top, turning them into souvenirs.

According to The Encyclopedia of Ephemera, it was a bit of a strange mix of delicate and crude. “Most of the border designs were fairly dedicated, but the overprinting was commonly primitive,” author Maurice Rickards explained. (In case you want to get a close-up look at some decorative napkins from the era, Princeton has a few.)

But even as they gained in prominence, they were seen as a scourge of formal dining. In a syndicated column from 1896, Helen Thompson of Brooklyn Magazine noted some initial skepticism around paper napkins:

“Paper napkins! Who ever heard of such nonsense! What good are they?” were among the many exclamations uttered by good housewives when they first learned that wiper napkins were being sold for table use. They pictured to themselves squares of thin, white paper that would break at the first attempt to put them to use, and sighed over the frivolity of the Japanese for bothering to make such articles.

Now, however since their value has become known, every picnic party must be well supplied with these little squares of Japanese art. Hotels and boarding-houses have begun to use them, greatly to the delight of their guests, and it will not be long before restaurants, steamboats and even private families will have them in use.

Paper napkins were seen as something of a faux pas in social settings until around the 1950s, when the product improved and convenience won out. A major turning point came in 1948, when American etiquette author Emily Post gave paper napkins a partial seal of approval. When asked whether it was better to reuse a cloth napkin or use a fresh paper one, she went with paper.

“It’s far better form to use paper napkins than linen napkins that were used at breakfast,” she said at the time.

Of course, paper napkins have a major difference between comparable cloth ones—they’re disposable. But are they recyclable?

As it turns out, not necessarily, for a variety of reasons.

For one thing, they’re near the end of their life cycle already. According to the Environmental Protection Agency, paper can generally be recycled five to seven times before it runs out of uses. And napkins, paper towels, and other kinds of waste paper tend to be near the end of that cycle, basically formulated from a slurry of water and old paper. (This video, showing the process of creating toilet paper, offers up a pretty good idea of what that recycling process looks like.)

If you’re using a napkin that’s been recycled, odds are much of the material in that napkin has gone through the recycling process multiple times, with fibers too short to be reused again. In a way, a recycled napkin is already a reusable success story.

Germs may be an issue, too, depending on the use case. A 2011 study from the American Journal of Infection Control notes that unused paper towels tend to already have germs baked in—and at a rate of 100 to 1,000 times more in recycled paper towels than virgin pulp paper.

(However, it should be noted that there were no reports of consumers getting sick from using these recycled sheets of paper, and the researchers said that the real issue in this case was the use of recycled napkins in hospital settings, where patients have lower immunities.)

The bigger issue, it turns out, is contamination.

You know how you’re not supposed to recycle pizza boxes? (Wait, you didn’t know?) The reason for that comes down to the fact that the box is naturally contaminated with the oils from the food, which is difficult to sort out in the recycling process. Likewise, used napkins often fit into this category.

“By providing clean recyclables, you can actually save your city (and ultimately, taxpayers) money,” writer Kiera Butler explained a Mother Jones article.

The best option here, as a result, is composting, which is generally OK for napkins and paper towels, as long as they aren’t greasy. In fact, one major napkin-maker, SCA, certified its Tork brand of napkins as compostable under the Biodegradable Products Initiative in 2011.

Of course, it’d be better if people relied on reusable napkins, but they’re actually going in another direction entirely at the moment.

In August 2017, the paper napkin brand Vanity Fair, owned by the paper conglomerate Georgia Pacific, attempted to make a hip napkin commercial, if you’d believe it.

It’s not exactly high art, but according to AdvertisingAge, this is apparently a strategy that the Koch Industries-affiliated napkin brand feels it has to make.

“We’re trying to make Vanity Fair Napkins, as well as the broader napkins category, more relevant to today’s consumer,” explained Lloyd Lorenzsonn, Georgia Pacific’s brand building and innovation leader of napkins (what a title!), in comments to the magazine. “These are universal situations we can all relate to and [the spots] serve the job of reintroducing the napkins within that context.”

And there’s a reason for all that. According to research firm Mintel, younger people see paper towels as being just as good as napkins. According to stats reported by The Washington Post last year, 86 percent of consumers bought paper towels, while just 56 percent bought napkins.

Now, you might be asking yourself, “What’s the difference? It all goes the same place anyway, and Georgia-Pacific owns Brawny anyway!” The secret here is that it’s one less thing that the average household is buying, which means that it’s one fewer item Georgia Pacific is selling to consumers. The company, per the Post story, noted that around four in 10 people buy napkins on a regular basis, down from six in 10 fifteen years ago.

This latest trend highlights the fact that our habits in regards to napkins, which started with edible scraps and eventually moved to disposable pieces of heavily recycled paper, are fairly malleable.

It wouldn’t be surprising if, even considering Georgia-Pacific’s massive size and foothold on the market, the public moved away from paper napkins or towels altogether at some point.

If you look in aggregate, the world has constantly been changing its napkin habits forever. How much do we lose if the paper isn’t pre-folded?

Nothing says that we have to use napkins.