The Boston Massacre of 1770 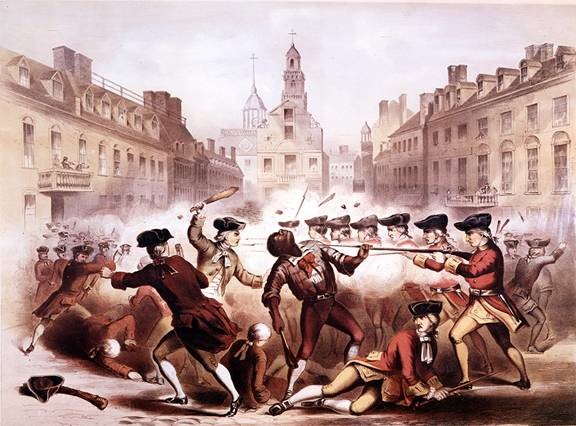 A relatively small street fight in Boston in 1770 was a spark that lit the fire of the American Revolution. 251 years ago, the Boston Massacre left five dead and challenged the colonists to uphold their own standards for the rule of law when it came time to try the case in court according to news.trace.com. Although not even an independent country yet, this early experience in delivering justice illuminated many of the same moral and ethical issues American citizens face today.

The Boston Massacre of 5 March 1770 was one of the first signs that the British occupation of their American colonies was a doomed effort. Since 1768, British soldiers (a.k.a., redcoats) had been deployed in the city of Boston to protect the British customs officials who enforced the Crown’s import and export taxes.

At the time, the population of Boston was only 16,000, so the 2,000 British soldiers who were sent there could not be ignored. Most of the colonists, those who called themselves patriots, by now hated the British. There was a smaller group of colonists who were faithful to the King of England, and they became known as the loyalists.

Two years into the occupation, the patriots began to direct their grievances not only to the redcoats but to their loyalist neighbors, too. On 22 February 1770 a skirmish at a loyalist-owned store ended in the shooting death (by a loyalist) of an 11-year-old boy, leading to a series of increasingly violent confrontations erupting throughout the city.

It was a cold and snowy Monday night on 5 March 1770 when a group of patriots gathered at the Custom House in downtown Boston, the building where the King of England stored his money. The patriots soon realized that the redcoat on duty, Private Hugh White, was the only British soldier in the area. He was wildly outnumbered, which emboldened the angry patriots. When they taunted him and threatened violence, he struck out with his bayonet and the riot began.

Private White was attacked by the crowd of patriots and soon bells began ringing throughout the city, calling other patriots to the scene for reinforcements. On the British side, backup troops began to arrive as well. Captain Thomas Preston and others joined White in defending the Custom House as the tension rose and taunts continued. Eventually the British fired a shot and, whether or not it was an accidental fire, all the British troops took it as permission to fire on the crowd.

“The bloody massacre perpetrated in King Street Boston on March 5th 1770 by a party of the 29th Regt.” engraved, published and sold by Paul Revere

In the end, five patriots were killed by the British that night. The first to die was Crispus Attucks, a Black patriot and rope maker who was the son of an enslaved man and a Natick Indian woman. Attucks’ body and those of the other four victims were carried to Faneuil Hall, the city’s central marketplace and meeting hall where the patriots tended to gather and organize. Their five bodies lay in state there, an honor reserved for great leaders. Immediately hailed as heroes of the patriot movement, the city of Boston waived its own race-segregation laws in order to bury Attucks with his four white comrades. Crispus Attucks was ultimately acknowledged as the first casualty and martyr of the American Revolution.

The Boston Massacre was an omen of trouble to come. It was also an opportunity for the colonists to demonstrate their superior sense of justice, by hiring John Adams, a local lawyer and future President, to represent the British defendants, including Captain Thomas Preston, who were facing a potential death sentence if found guilty of murder. It was important to Adams and other colonists to demonstrate their respect for the rule of law and their ability to govern themselves. Adams’ argument focused on the one fact neither side could deny: the absolute chaos of the event itself. The confusion of the battle was enough to raise reasonable doubt about the intentions of the British soldiers, and the colonial jury found Preston and his British compatriots not guilty of murder (although two were convicted on the lesser charge of accidental manslaughter).

John Adams and the colonial jury succeeded in finding a nonviolent resolution to the Boston Massacre itself. As Adams later wrote in a letter to his wife Abigail, “the law…will not bend to the uncertain wishes, imaginations, and wanton tempers of men.” Nevertheless, the event was soon followed by more and more outbursts of frustration and violence between the patriots and the British, including the Boston Tea Party (1773), which the British met with a series of punishing legislative acts (the so-called Coercive Acts of 1774), which only further enraged the colonists, all of it leading to the battles of Lexington and Concord, Massachusetts in 1775 and the outbreak of the American Revolution.

In later years, after his Presidency, John Adams remembered his legal role in the trial of the Boston Massacre as “the greatest service I ever rendered my country.” As with all moments of crisis, the event and its aftermath allowed Americans to see their values in action--and under attack. Adams considered law the foundation of civil society and of the new nation itself. 251 years later, Americans continue to reckon with the same questions.