10 Interesting Things About The Month Of May 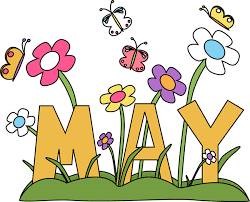 May has only one U.S. federal holiday, but there are other days in the month to celebrate according to blastingnews.com.

There are some interesting things to know about the month of May. After a long winter, most people are glad to see those flowers that have come up out of the ground because of the April showers. Here are 10 things that are interesting about May.

May is the fifth month of the year. It is one of seven months that have 31 days. The other months are January, March, July, August, October, and December.

May is named after the Greek goddess Maia who looked after plants. The month is known for love and success. It is not only the name of the month, but some parents give their girls May as a first or middle name especially if they are born in that month.

The flower that represents May is the Lily of the Valley. It is beautiful with blossoms that resemble a bell. It has a sweet fragrance.

The birthstone for May is the precious emerald. The popular color is green, but that's not the only color of an emerald. Green is the primary color, but yellow and blue are also colors of some emeralds. They are precious no matter what the color is.

While there are several days to celebrate in May, there is only one federal holiday. That is Memorial Day that comes on the last Monday in the month every year. It is on May 28 this year. That's the day people remember those who died while serving their country in the armed forces.

Mother's Day is celebrated on the second Sunday in May every year. It is on May 13, 2018, when mothers, expecting mothers, and mother figures are recognized. Those women are served breakfast in bed, taken out to dinner and given flowers and gifts.

Cinco de Mayo is celebrated on May 5th every year no matter which day it falls on.interestig

This year, it is on Saturday. That's good for those who will be participating in various festivities and parties. They can stay up late and eat, drink and dance the night away without having to go to work or school the next day.

It always happens on or around Memorial Day weekend. This year, it is on Sunday, May 27 and Memorial Day is celebrated on Monday, May 28. Just as the name of the race indicates, there will be 33 drivers with 500 miles to cover.

9. Presidents born in May

Only two United States Presidents were born in this particular month. Harry S. Truman was born on May 8, 1884, and John F. Kennedy was born on May 29, 1917. It is the only month of the year when no president died.

The saying is that April showers bring May flowers. If that is true, then there will be plenty of beautiful flowers in people's yards and on hillsides because there were many showers in April.