Spring Cleaning Used to be Unavoidable—Here’s Why 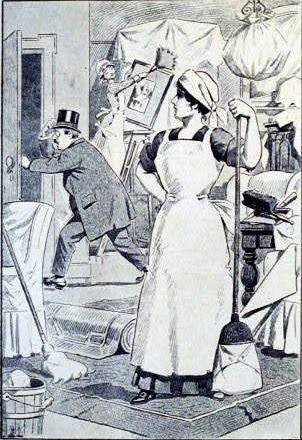 Do you feel the call of spring cleaning when the weather starts to warm up asks this article from fishwrap.com? While today it’s largely personal preference whether we spring clean or not, it was a practical necessity up until about 100 years ago.

Why Was Spring Cleaning Necessary?

Until the 20th century, homes in the United States were typically heated with wood or coal during the winter, and candles and oil lamps were used to light rooms at night—all of which left soot and smoke coating walls, windows, and other surfaces. Few roads were paved back then, so dirt, manure, and other detritus would get tracked indoors. Bugs and vermin were a problem in many homes as well.

Families did their best to keep their homes clean during the winter months, but cold temperatures and bad weather prevented a thorough cleaning, since many cleaning methods necessitated taking furnishings, carpets, and bedding outdoors. So when spring came with its sunshine and warmer weather, it was time to clean the home of the accumulated winter grime.

Every good houskeepter knows that after the smoke and dusto f winter there comes a time when the returning sunshine tells with vivid truthfulness a tale of woe.  She finds curtins dusty, carpets and rugs dirty, dullness where polish should be, and even cobwebs are to be found in high places in the best regulated households, since no house is so exalted as to scare the ubiquitous spider from making his home in some out-of-the-way corner.

Depending on the area of the country, spring cleaning was typically done during April or May, when the weather was warm enough that the family would no longer need a sooty fire or stove to heat their home. The weather also needed to be pleasant enough that household furnishings could be shifted outdoors to be cleaned and windows opened to air out the home.

What Did Spring Cleaning Involve?

Spring cleaning in past centuries was labor intensive, and the task fell almost exclusively to women—who either did the cleaning themselves or (income permitting) oversaw the work of others. The children of the house were often also pressed into service, but husbands were not usually involved due to traditional gender roles.

Cleaning the walls and ceilings
Re-applying homemade whitewash (more common in rural homes) or replacing wallpaper/paint (in homes that could afford it)
Cleaning the windows
Washing the curtains and switching out heavy winter curtains for lighter summer ones
Wiping down and polishing wooden furniture
Pulling up any rugs or carpeting and beating them outdoors
Scrubbing the floors
Airing out the bedding (re-stuffing mattresses if needed) and treating the bedsteads to kill and repel bugs
Packing away winter clothing and blankets
Dismantling the stoves used to heat the home and/or cleaning the chimneys
These spring cleaning tips we found in 19th-century papers on Newspapers.com give a sense of what the process was like during that era:

Commence your work by sweeping the ceiling with a soft brush or cloth tied ofr a broom.  Then rub the wall paper, as high as you can reach with your hand, with a piece of old flannel - if there are any very bad spots upon it use a crust of white bread, rubbing with the inner side.  Make a sort of mop, by tying the flannel to a pole, for cleaning the higher part of the wall.

If there are old feather beds, and no steam renovator at hand, put them out in the first drenching rain that falls.  Let them become thoroughly wet, and turn the beds several times; then dry them in the sun, and when one side is thoroughly dry, beat it with sticks to lighten up the feathers, and turn up the other side to dry; either placing boards under it, or putting the beds on the piazza rood, if one is at hand.

After the floors have been scrubbed and dried, have them washed with salt-water (so salt that the boiling water used in making itit will hold no more solution), and this will carry certain death to any insects that may be lurking in the cracks.  Take your beadsteads to pieces and saturate every crevice with brine, and you will find it good for the sleepers and bad for the bugs, if there are any.

Why Did Spring Cleaning Change?

In the late 19th century and early 20th, spring cleaning began to change. The invention of modern appliances—notably the vacuum cleaner—and mass-produced cleaning products made routine cleaning easier. And the widespread adoption of electricity, gas furnaces, central air, and paved roads greatly reduced the indoor dirt and grime that had made a thorough spring cleaning so essential.

By the mid-20th century, spring cleaning had become more of a tradition than a necessity in the U.S.—a reality that was reflected in a number of newspaper columns that questioned the need for an annual spring cleaning.

Much of the heavy work of spring cleaning can be eliminted by clening only one part of the house at a time, believes Miss Christine Newark, of the shcool of home economics at Oklahoma A. and M. college.

By doing one extra job each week along with the weekly cleaning, the family routine will not be disturbed and the homemaker will retain a happier disposition because she will not be over-tired.