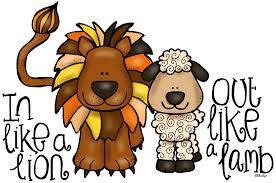 "March is a month of considerable frustration - it is so near spring and yet across a great deal of the country the weather is still so violent and changeable that outdoor activity in our yards seems light years away."
-  Thalassa Cruso

"The air is like a butterfly
With frail blue wings.
The happy earth looks at the sky
And sings."
-  Joyce Kilmer, Spring

"The afternoon is bright,
with spring in the air,
a mild March afternoon,
with the breath of April stirring,
I am alone in the quiet patio
looking for some old untried illusion -
some shadow on the whiteness of the wall
some memory asleep
on the stone rim of the fountain,
perhaps in the air
the light swish of some trailing gown."
-  Antonio Machado, 1875-1939
Selected Poems, #3, Translated by Alan S. Trueblood

"Each leaf,
each blade of grass
vies for attention.
Even weeds
carry tiny blossoms
to astonish us."
- Marianne Poloskey, Sunday in Spring

"The word 'March' comes from the Roman 'Martius'. This was originally the first month of the Roman calendar and was named after Mars, the god of war.  March was the beginning of our calendar year. We changed to the 'New Style' or 'Gregorian calendar in 1752, and it is only since then when we the year began on 1st January. The Anglo-Saxons called the month Hlyd monath which means Stormy month, or Hraed monath which means Rugged month. All through Lent the traditional games played are marbles and skipping. The games were stopped on the stroke of twelve noon on Good Friday, which in some places was called Marble Day or Long Rope Day.  The game of marbles has been played for hundreds of years and some historians say that it might have been started by rolling eggs. In the past, round stones, hazelnuts, round balls of baked clay and even cherry stones have been used."
-  Facts About March

“Then you should say what you mean,' the March Hare went on. `I do,' Alice hastily replied; `at least - at least I mean what I say - that's the same thing, you know.'”
-  Lewis Carroll

"The sun is brilliant in the sky but its warmth does not reach my face.
The breeze stirs the trees but leaves my hair unmoved.
The cooling rain will feed the grass but will not slake my thirst.
It is all inches away but further from me than my dreams."
-  M. Romeo LaFlamme, The First of March

"I wandered lonely as a cloud
That floats on high o'er vales and hills,
When all at once I saw a crowd,
A host, of golden daffodils;
Beside the lake, beneath the trees,
Fluttering and dancing in the breeze."
-  William Wordsworth, Daffodils

"March is the month of expectation,
The things we do not know,
The Persons of Prognostication
Are coming now.
We try to sham becoming firmness,
But pompous joy
Betrays us, as his first betrothal
Betrays a boy."
-  Emily Dickinson, XLVIII

"The first day of spring was once the time for taking the young virgins into the fields, there in dalliance to set an example in fertility for nature to follow.  Now we just set the clocks an hour ahead and change the oil in the crankcase."
-   E.B. White, "Hot Weather," One Man's Meat, 1944