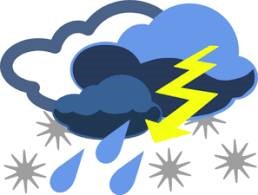 The Storm of the Century just pummeled the east coast last week breaking snow total records that have stood for decades.  Here in a multi-faceted article about winter storms from weatherwizkids.com we find answers to the many questions that were probably running through our minds as we sat keeping our fingers crossed that it would all be over soon!  (The accompanying illustrations are courtesy of weatherwizkids.com)

How do winter storms form? - Winter storms derive their energy from the clash of two air masses of different temperatures and moisture levels. Winter storms usually form when an air mass of cold, dry, Canadian air moves south and interacts with a warm, moist air mass moving north from the Gulf of Mexico. The point where these two air masses meet is called a front. If cold air advances and pushes away the warm air, it forms a cold front. When warm air advances, it rides up over the denser, cold air mass to form a warm front. If neither air mass advances, it forms a stationary front.

How is snow formed? - Snow is commonly formed when water vapor undergoes deposition, which is when water vapor changes directly to ice without first becoming a liquid, high in the atmosphere at a temperature of less than 32°F and then falls to the ground.

How do blizzards form? - A blizzard is a long-lasting snowstorm with very strong winds and intense snowfall. You need three things to have a blizzard; cold air at the surface, lots of moisture, and lift. Warm air must rise over cold air.

What are snowflakes? - Snowflakes are made of ice crystals. Each snowflake is six-sided and made of as many as 200 ice crystals. Snowflakes form in clouds where the temperature is below freezing. The ice crystals form around tiny bits of dirt that has been carried up into the atmosphere by the wind. As the snow crystals grow, they become heavier and fall toward the ground.

Why is snow white? - Bright snow blinds us with its gleaming white color because it reflects beams of white light. Instead of absorbing light, snow's complex structure prevents the light from shining through its lattice formation. A beam of white sunlight entering a snow bank is so quickly scattered by a zillion ice crystals and air pockets that most of the light comes bouncing right back out of the snow bank. What little sunlight is absorbed by snow is absorbed equally over the wavelengths of visible light thus giving snow its white appearance. So while many natural objects get their blue, red, and yellow colors from absorbing light, snow is stuck with its white color because it reflects light.

What is thundersnow? - Thundersnow is when thunder and lighting occur during a snowstorm. This occurs most often in late winter or early spring. To get thundersnow, you need a mass of cold air on top of warm air, plus moist air closer to the ground. Thundersnow starts out like a summer thunderstorm. The sun heats the ground and pushes masses of warm, moist air upward, creating unstable air columns. As it rises, the moisture condenses to form clouds, which are jostled by internal turbulence. The "tricky part" for making thundersnow is creating that atmospheric instability in the wintertime. For thundersnow to occur, the air layer closer to the ground has to be warmer than the layers above, but still cold enough to create snow. During thundersnow events, heavy snowfall is to be expected. In some cases, two inches per hour is possible.

What is sleet? - Sleet is just rain drops that freeze into ice pellets before reaching the ground. Sleet usually bounces when hitting a surface and does not stick to objects. However, it can accumulate like snow and cause a hazard to motorists.

What is freezing rain? - Freezing rain is just rain that falls onto a surface with a temperature below freezing. This causes it to freeze to surfaces, such as trees, cars, and roads, forming a coating or glaze of ice. Even small accumulations of ice can cause a significant hazard.

What is an ice storm? - An ice storm is a type of winter storm caused by freezing rain. The U.S. National Weather Service defines an ice storm as a storm which results in the accumulation of at least 0.25-inch of ice on exposed surfaces.

How do ice storms form? - Ice storms form when a layer of warm air is between two layers of cold air. Frozen precipitation melts while falling into the warm air layer, and then proceeds to refreeze in the cold layer above the ground. This creates freezing rain or a glaze of ice.

What is frost? - Frost is white ice crystals that form on a surface, like the ground or leaves of a plant. Frost is created when the air temperature drops below freezing and the water vapor in the air freezes into ice crystals.

What is a frost quake? - Frost quakes are non-tectonic seismic events, meaning they are not caused by the shifting of the Earth's tectonic plates. Also known as cryoseisms, frost quakes are caused by a sudden rapid freezing of ground and bedrock, usually when temperatures go from above freezing to below zero. As moisture absorbed in the rock and soil freezes, it expands. This puts a great amount of stress on the areas around it. Eventually, the stress is too much and the soil and rock will crack in an "explosive" manner, creating a loud sound and even shaking the ground surface. Since temperatures are coldest in the overnight hours, most people experience frost quakes in the middle of the night.

How is lake-effect snow formed? - As the cold air flows over the warm lake water, the relatively warm water heats the air's bottom layer as lake moisture evaporates into the cold air. Since warm air is lighter or less dense than cold air, the heated air rises and begins to cool. As the air cools, the moisture that evaporated into it condenses and forms clouds and snow begins falling from the cloud if the air is humid enough.

What is a Nor'easter?  - Nor'easters can occur in the eastern United States any time between October and April, when moisture and cold air are plentiful. A Nor'easter is named for the winds that blow in from the northeast and drive the storm up the east coast along the Gulf Stream, a band of warm water that lies off the Atlantic coast. They are known for dumping heavy amounts of rain and snow, producing hurricane-force winds, and creating high surfs that cause severe beach erosion and coastal flooding.

What is an Alberta Clipper? - An Alberta clipper is an area of low pressure that generally forms over Alberta, Canada, east of the Rocky Mountains. They develop east of the Rockies because air flowing eastward over the mountains creates favorable conditions. Once an Alberta Clipper forms it usually moves very rapidly to the southeast across the USA's northern Plains and then to the east off the mid-Atlantic Coast. Clippers usually cause only light precipitation with very few producing major snowstorms. However, if conditions are favorable, some Alberta clippers can rapidly intensify off the East Coast once the storm taps the relatively warm moist air over the Atlantic Ocean. The storms that rapidly intensify sometimes spread heavy snow over New England and southeastern Canada. Generally, the main weather features associated with Alberta clippers are some light snow and a reinforcement of cold air over the USA.

What is frostbite? - Frostbite is damage to the skin due to prolonged exposure to cold temperatures, usually below 32° F.

What is an avalanche? - An avalanche is a moving mass of snow that may contain ice, soil, rocks, and uprooted trees. The height of a mountain, the steepness of its slope, and the type of snow lying on it all help determine the likelihood of an avalanche. Avalanches begin when an unstable mass of snow breaks away from a mountainside and moves downhill. The growing river of snow picks up speed as it rushes down the mountain. Avalanches have been known to reach speeds of 245 miles an hour (394 kilometers per hour)—about four times as fast as the speediest downhill skier.

Winter Weather Advisories - Issued for accumulations of snow, freezing rain, freezing drizzle, and sleet which will cause significant inconveniences and, if caution is not exercised, could lead to life-threatening situations.

Winter Storm Watch - Alerts the public to the possibility of a blizzard, heavy snow, heavy freezing rain, or heavy sleet. Winter Storm Watches are usually issued 12 to 48 hours before the beginning of a winter storm.

Blizzard Warning - Issued for sustained or gusty winds of 35 mph or more, and falling or blowing snow creating visibilities at or below 1/4 mile. These conditions should persist for 3 hours.

Frost/Freeze Warning - Issued when below freezing temperatures are expected.

Wind Chill Advisory - Issued when the wind chill temperature is forecast to be between -15°F to -24°F.

Wind Chill Warning - Issued when the wind chill temperature is forecast to be -25°F or lower.

Before A Winter Storm: Have a disaster plan and prepare a disaster supplies kit for your home and car. Include a first aid kit, emergency food supply, bottled water, battery-operated radio, flashlight, protective clothing, and blankets. Don't forget, be aware of changing weather.

During A Winter Storm: Stay indoors and dress warmly. Eat regularly, because food provides the body with energy for producing its own heat. Also, drink lots of water. If you must go outside, wear layered clothing, mittens and a hat. Watch for signs of hypothermia and frostbite. Remember to keep dry. Always change wet clothing to prevent the loss of body heat. If you must drive, carry a cell phone. Always, keep the gas tank full. Don't forget, let someone know where you’re going, just in case your car gets stuck. If you’re car gets stuck, stay with it and wait for help unless help is visible within 100 yards. Use maps and car mats to stay warm.

After A Winter Storm: Avoid driving until conditions have improved. Avoid overexertion! Heart attacks from shoveling snow are the leading cause of deaths during the winter. Also, check on neighbors to make sure they're okay.