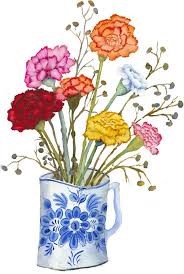 Image: Carnations in a mug - clipartpanda.com

The January birth flower is the Carnation according to birthdaygems.com.


The general meaning of the Carnation is love, fascination, and distinction
The history and traditions surrounding the January Birth Flower, the Carnation is fascinating. There are many myths and legends about the origins of this tradition. It is believed that birthday celebrations originated in the Roman Empire and the origins of birth month flowers, such as the Carnation,  could be said to date back to these times. During Roman birthday celebrations family and friends offered congratulations and brought gifts. The gifts included gemstone jewelry, such as the Garnet, and also flowers - the first traditions and origins of the January Birth Flower.
The language of flowers developed during the highly conservative period of the Victorian era. The Victorians were strongly restricted by the rules of etiquette when it was considered totally inappropriate to express feelings of love or affection. The "Language of Flowers" therefore evolved when a message was assigned to specific flower such as the Carnation. A lover could then send flowers which conveyed a hidden romantic meaning.

The meaning of the Carnation is love, fascination, and distinction.

The hidden message of the Carnation, so favored during the Victorian era varied according to color:

The colors of the Carnation include the following:

Month of January Flowers, the Carnation or Snowdrop, to celebrate New Year's Day, Epiphany (12 days after Christmas), Martin Luther King's birthday on the third Monday in January and even Golf Day on January 17

Definition of the Carnation: A Eurasian plant with pink to purple-red spice-scented usually double flowers; widely cultivated in many different varieties and colors

The scientific name of a flower species is formed by the combination of two terms: the genus name and the species descriptor in the case of the carnation the Dianthus caryophyllus.

The Carnation is also called clove pink and gillyflower.

The flower has been cultivated for the last 2,000 years.

The name "carnation" is derived from the words "coronation" or the Greek word "corone" (meaning flower garlands).

Carnation is also the name of an American city located in King County, Washington.