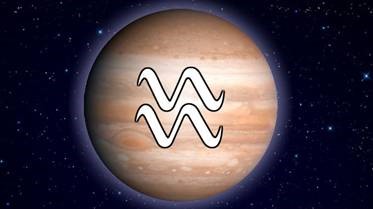 Jupiter moves into Aquarius today, 17 December 2020, and remains there until 30 December 21 according to fayastrology.wordpress.com

Looking to the Future – A Time for Something Different

While Jupiter transits Aquarius, from 18 December 2020 to 30 December 2021 (excepting the period 13 May – 29 July 2021 when it moves forward into Pisces and then back again), visions of a new future are likely to abound both personally and globally, with a multitude of advocates for a different and more progressive world appearing. It is a time for increased enlightenment, for greater discovery, knowledge and understanding, particularly in science and technology, global communications and the internet and a new, more ethical mind-set where these are concerned. There is a strong urge to move on, to improve things, to have more individualism, freedom, equality and human rights, and consequently increased dissatisfaction with and opposition to conventional attitudes, out-of-date hierarchies and old structures that prevent such progress. There is likely to be an increase in people who see things differently, who want reform, who want change, who are willing to experiment with something out of the ordinary, all in a quest for a new, better life. This surge for change means protests and rebellions are likely to be rife, but a much greater sense of vision, for what can be, uplifts and energises, to give faith in the future and the belief in miraculous change!

Jupiter’s transit of Aquarius adds to the instability already being brought in with Uranus’ transit of Taurus (Uranus is the ruler of Aquarius), which is bringing shocks and insecurity into our everyday lives by breaking the usual mould apart, to urge us to break free from our usual practices and traditions and what we have essentially outgrown. So this is indeed a time that challenges us to change, to open our minds to other possibilities and options. With Saturn also in Aquarius during this time bringing a climate of fear and resistance to change, any change or reform can be an uphill struggle, but with hard work and perseverance, realism and planning, enduring alternatives can eventually be established.

Aquarius is a friendly, progressive and humanitarian sign symbolised by the Water Carrier and represents intellectual consciousness combined with an ability to see into the future and see possibilities beyond what is already known. It is a very sociable sign, as the communication of ideas and concepts is central to its being, and loves to have lots of friends and to be part of a team or a group, so a sense of community is important. Aquarius is also a very independent sign and values equality, freedom and individuality; it therefore hates to be tied down or restricted by tradition, rules, emotional neediness or petty mindedness. Aquarius is rational and logical yet also inspirational in its thinking, so tends to challenge the establishment and, with Uranus the Planet of Revolution as its ruler, can be unconventional, rebellious and revolutionary. Aquarius is therefore the sign of the inventor, reformer and rebel, inspired to challenge the status quo in order to bring in something different. It is associated with inventions, scientific experimentation and advanced technology, anything that enhances the progress of humankind. It is also associated with the universe and the universal mind, so has interests in astrology and universal laws, the universe and space, science fiction and anything futuristic or ‘out of this world’.

Jupiter is the Planet of Expansion, Improvement and Opportunity, so this is a year to expand our horizons in Aquarian ways, to have foresight and vision, to be more independent, to regain our sense of individuality, as well as our sense of community, to be proud of our uniqueness and to consciously think about where we and society are heading.  It is a time to expand scientific and technological horizons, to go beyond what is already familiar to us, and we are likely to see a surge in scientific and technological discovery and invention, an expansion of space travel and new insights into the planets and universe, with scientists and innovators coming to prominence, and even more new gadgets that free us from the humdrum. The idealistic energy of Aquarius which sees a better world for everyone, means theories and visions of a new improved future, based on freedom, equality and the rights of the individual, are likely to abound, both personally and globally. This affects the way we organise ourselves and interact as a community, whether within our families, with friends, in groups, on a local level, nationally or internationally.

Jupiter in Aquarius is a time when the spirit of rebellion blooms and a disregard for the past is heightened, when freedom and independence become all important. There can therefore be a pronounced restlessness, a flourishing of deviant behaviour, people doing their own thing regardless of others, defying convention, breaking from the past, leaving restricting jobs or relationships and experimenting with alternatives. It is a time to explore different ideas and paths, however quirky or weird they may appear to others, perhaps not contemplated before or only dreamed of, and to discover a new world out there. This means going beyond our usual thoughts, views and opinions and moving forward with some new and different ideas, which changes how we live our lives. It is a time for forward thinking and open mindedness, to free ourselves from the past and the restraints we have been under, to widen our horizons through trying something new.  We may experience a eureka moment, a vision, a sudden revelation, which totally changes our outlook and we suddenly see things so differently that we are inspired to determine “I’ve had enough, I’m off!”

Jupiter urges us to go further to find greater fulfilment and in Aquarius this means finding ways to be free to express our own unique ideas, abilities and eccentricities, to be proud of being different but also to be part of a team or group. We can benefit by cultivating and using Aquarian skills and qualities, such as logic, foresight, broadmindedness and sociability. We can improve our relationships by being more communicative, rational and logical (rather than emotional) and staying detached, and by opening up or improving our channels of communication to enhance interaction and understanding. We can gain by valuing freedom and independence for all and developing a spirit of community. Thinking outside the box, being inspired with new ideas and future possibilities, experimenting with new ways and challenging outmoded beliefs and practices can all bring growth and fulfilment.

So we may well find ourselves meeting new friends (perhaps leaving old friends) and being more sociable, joining groups of like-minded people or those we identify with, communicating our ideas more, networking new ideas, instigating reform or getting involved in the community. Or we may feel the urge to research new subjects, to broaden our mind and knowledge, particularly related to science, technology, the global community, the internet, the universe or astrology. Anything which encourages us to go beyond our usual parameters of thought and behaviour and to communicate new ideas and theories and open up to a greater, wiser understanding, should be of great benefit to us and our future.

We should all have the opportunity to develop and grow personally by being prompted to see where we have become bound by convention, narrow-minded in our thinking or closed in our attitudes. Challenges to inequality, bigotry and sheep-like attitudes are likely to be rife and this is to bring in a greater acceptance of individualism as well as greater tolerance for others and their ways of life, however different to our own. So watch out for any such challenges as they are there to make you aware of yourself as an individual as well as a member of the wider society. The aim is to further equality, individual rights and the freedom of all to follow their own path as well as to enhance human consciousness by gaining knowledge, understanding and wisdom, to make the world a better place, and our teachers may come in all sorts of guises, so watch out for them!

RISING SIGN, SUN & MOON IN AQUARIUS  If your Rising Sign, Sun or Moon is in Aquarius, then you especially can look forward to a time of great progress and change during this year, with your confidence boosted and your horizons widened. Your inherent Aquarian abilities and skills are likely to come to the fore and bring you great rewards, so that you achieve independence and succeed in terms of your role within a community.

With your natal Sun in Aquarius your sense of individuality and uniqueness is enhanced and you can feel very proud of who you are. You are likely to feel greatly energised, with your off-the-wall creative juices flowing and your mind filled with lots of new weird and wonderful ideas for a better future. An exciting and fun time for you when you have the opportunity to really be yourself and do your own thing.

With Aquarius Rising, you may feel like you are emerging from an unreal, surreal time, where you have felt isolated or hidden in some way, as though you are emerging from a weird dream and now setting off on a totally new phase of life, with your bags packed and ready for the journey. You may have visions of a new future and be filled with a new optimism, bursting to do something totally different. You may also radically change your appearance and image to match your new attitude.

With your natal Moon in Aquarius you are likely to experience changes and improvements in your home and family life that make you feel more comfortable and at peace, where you can do your own thing free of restrictions and ties. You may find a bigger or better home where you have the space to be truly independent and can express your individuality and eccentricities, or move somewhere different to live, to experience an alternative life style, may be much further away, and where you feel you have “come home”. There may be an expansion of your family, with new members or a new pregnancy.

JUPITER’S RETURN  We all experience what is known astrologically as Jupiter’s Return  every 12 years, at around the ages of 12, 24, 36, 48, 60, 72, 84 and 96, when Jupiter returns to the exact position it was at the moment of birth. If you were born on or between any of the following dates:

when Jupiter was previously in Aquarius, you will experience Jupiter’s Return this year. This is a time associated with a strong urge for freedom and expansion, when you will want to improve yourself and explore and experience some new area of life, when new horizons open up to you and a new phase of your life begins. There can be a great feeling of progress and fulfilment in your life, a greater faith in the future, and a strong sense of discovery and leaving the past behind.

Jupiter takes approximately one year to move through each sign of the Zodiac, so the last time it was in Aquarius was 12 years ago, or to be more exact, between 6 January 2009 and 18 January 2010. Can you remember what was happening in your life during that year? (and 12 years before that? 22 Jan 1997 – 4 Feb 1998, and 12 years before that …?  Can you see the pattern?)  How were your horizons broadened then? What kind of new expansion and rejuvenation became important for your future?  The answers will give you an idea of what is in store for you during the forthcoming year. Though this time you should have greater wisdom and confidence to make the most of it!  So enjoy!!