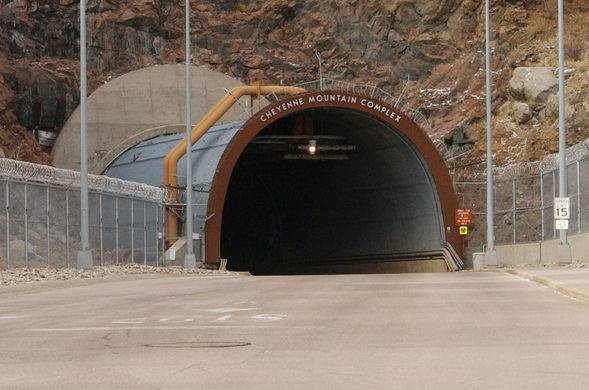 The superstar of Cold War nuclear bunkers has been featured in countless films but is now barely operational according to atlasobscura.com.

Fans of military fiction might recognize this iconic bunker, which has served as a secret base for media properties including Wargames, Independence Day, and Stargate SG-1. Extending deep into a Colorado mountainside, the Cheyenne Mountain Nuclear Bunker may be the most recognizable semi-secret base in American history thanks to its appearances on both the big and small screen, but it is now more flash than function since most of its operations have been moved elsewhere.

Digging on the bunker began in 1961 as a privately owned mining operation was enlisted by the U.S. military to begin blasting out caverns within the mountain itself. A series of main chambers were cleared out, creating acres of underground space in which a series of buildings were created, supported on springs to prevent from earthquakes and reinforced against the surrounding rock. Other support chambers such as water reservoirs and supply storage were also created, making the site fully self-sufficient for an extremely long period.

By 1966 the bunker was fully operational and soon became the headquarters for NORAD (North American Aerospace Defense Command) which had control of the “buttons” that were so in fear of being pressed throughout the Cold War. During its heyday, the operation controlled sophisticated air defense programs out of five dedicated centers in the bunker complex. The complex was protected from EMP blasts, shelling, natural disasters, and ground invasion making it an ideal location for the strategically vital defense programs. Unfortunately nothing (yet) can protect from the progress of time, and as America’s defensive processes changed, and each of the defense centers were moved to a nearby airbase, leaving Cheyenne Mountain inhabited by a skeleton crew of maintenance personnel for eventual use as a back-up strategic location by the mid-2000’s.

However long before the mountain fortress was essentially abandoned, it had already entered the cultural consciousness thanks to some high profile appearances in television and movies. While the interior of the base has not seen much screen time, the evocative entrance portal which is a tall, militaristic driveway that leads straight into the mountainside, has served as the backdrop to many a fantastical military yarn. The entrance was featured in the movies Wargames and Independence Day, and the television show Stargate SG-1, in which the secretive Stargate commandoes were actually said to be based out of the bunker through the entirety of its long run. To honor this there is said to be a broom closet in the actual bunker base that is labeled, “Stargate Command.”

Cheyenne Mountain may not be the hottest player on the military scene anymore, but fans of military fiction will never forget the bunker’s glory days.

Tours aren't allowed for a reason; it is definitely not empty—in fact it's at 'full capacity' but is classified. It's a backup site for NORAD. You can definitely see it from the road! Just get on route 115 off I-25. Its great at night because the entrance is lit up.