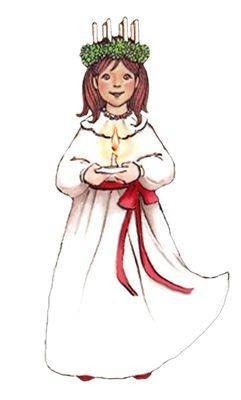 St. Lucy, Italian Santa Lucia, (died 304, Syracuse, Sicily; feast day December 13), virgin and martyr who was one of the earliest Christian saints to achieve popularity, having a widespread following before the 5th century according to britannica.com. She is the patron saint of the city of Syracuse (Sicily) and of virgins. Because of various traditions associating her name with light, she came to be thought of as the patron of sight and was depicted by medieval artists carrying a dish containing her eyes.

According to apocryphal texts, Lucy came from a wealthy Sicilian family. Spurning marriage and worldly goods, however, she vowed to remain a virgin in the tradition of St. Agatha. An angry suitor reported her to the local Roman authorities, who sentenced her to be removed to a brothel and forced into prostitution. This order was thwarted, according to legend, by divine intervention; Lucy became immovable and could not be carried away. She was next condemned to death by fire, but she proved impervious to the flames. Finally, her neck was pierced by a sword and she died.

In actuality, Lucy was probably a victim of the wave of persecution of Christians that occurred late in the reign of the Roman emperor Diocletian. References to her are found in early Roman sacramentaries and, at Syracuse, in an inscription dating from 400 CE. As evidence of her early fame, two churches are known to have been dedicated to her in Britain before the 8th century, at a time when the land was largely pagan.

St. Lucy is venerated on her feast day, December 13, by a variety of ceremonies. In Sweden, St. Lucia’s Day marks the beginning of the Christmas celebration. On that day the eldest daughter of the family traditionally dresses in a white robe with a red sash, she wears as a crown an evergreen wreath studded with candles.

St. Lucia’s Day, festival of lights celebrated in Sweden, Norway, and the Swedish-speaking areas of Finland on December 13 in honour of St. Lucia (St. Lucy). One of the earliest Christian martyrs, St. Lucia was killed by the Romans in 304 CE because of her religious beliefs. St. Lucia's Day is observed on Sunday, December 13, 2020.

In Scandinavian countries each town elects its own St. Lucia. The festival begins with a procession led by the St. Lucia designee, who is followed by young girls dressed in white and wearing lighted wreaths on their heads and boys dressed in white pajama-like costume singing traditional songs. The festival marks the beginning of the Christmas season in Scandinavia, and it is meant to bring hope and light during the darkest time of the year. Schools generally close around noon on the day of the festival so that families can prepare for the holiday. Families observe St. Lucia’s Day in their homes by having one of their daughters (traditionally the eldest) dress in white and serve coffee and baked goods, such as saffron bread (lussekatter) and ginger biscuits, to the other members of the family. These traditional foods are also given to visitors during the day.

In earlier centuries the Norse celebrated the winter solstice with large bonfires meant to scare off evil spirits and to alter the course of the sun. After converting to Christianity sometime around 1000, the Norse incorporated the legend of St. Lucia into their celebration. The modern festival of light combines elements of both pagan and Christian traditions.