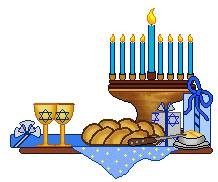 Chanukah is the Jewish eight-day, wintertime “festival of lights,” celebrated with a nightly menorah lighting, special prayers and fried foods according to chabad.org.

The Hebrew word Chanukah means “dedication,” and is thus named because it celebrates the rededication of the Holy Temple (as you’ll read below). Also spelled Hanukkah (or variations of that spelling), the Hebrew word is actually pronounced with a guttural, “kh” sound, kha-nu-kah, not tcha-new-kah.

In the second century BCE, the Holy Land was ruled by the Seleucids (Syrian-Greeks), who tried to force the people of Israel to accept Greek culture and beliefs instead of mitzvah observance and belief in G‑d. Against all odds, a small band of faithful but poorly armed Jews, led by Judah the Maccabee, defeated one of the mightiest armies on earth, drove the Greeks from the land, reclaimed the Holy Temple in Jerusalem and rededicated it to the service of G‑d.

When they sought to light the Temple's Menorah (the seven-branched candelabrum), they found only a single cruse of olive oil that had escaped contamination by the Greeks. Miraculously, they lit the menorah and the one-day supply of oil lasted for eight days, until new oil could be prepared under conditions of ritual purity.

To commemorate and publicize these miracles, the sages instituted the festival of Chanukah.

How Chanukah Is Observed

At the heart of the festival is the nightly menorah lighting. The menorah holds nine flames, one of which is the shamash (“attendant”), which is used to kindle the other eight lights. On the first night, we light just one flame. On the second night, an additional flame is lit. By the eighth night of Chanukah, all eight lights are kindled.

Special blessings are recited, often to a traditional melody, before the menorah is lit, and traditional songs are sung afterward.

A menorah is lit in every household (or even by each individual within the household) and placed in a doorway or window. The menorah is also lit in synagogues and other public places. In recent years, thousands of jumbo menorahs have cropped up in front of city halls and legislative buildings, and in malls and parks all over the world.

Chanukah begins on the eve of Kislev 25 and continues for eight days. On the civil calendar, it generally coincides with the month of December. Chanukah 2020 runs from Dec. 10-18.

Since the Chanukah miracle involved oil, it is customary to eat foods fried in oil. The Eastern-European classic is the potato latke (pancake) garnished with applesauce or sour cream, and the reigning Israeli favorite is the jelly-filled sufganya (doughnut).

On Chanukah, it is customary to play with a “dreidel” (a four-sided spinning top bearing the Hebrew letters, nun, gimmel, hei and shin, an acronym for nes gadol hayah sham, “a great miracle happened there”). The game is usually played for a pot of coins, nuts, or other stuff, which is won or lost based on which letter the dreidel lands when it is spun.

In today’s consumer-driven society, people tend to place great importance on giving Chanukah gifts. However, the tradition is actually to give Chanukah gelt, gifts of money, to children. In addition to rewarding positive behavior and devotion to Torah study, the cash gifts give the children the opportunity to give tzedakah (charity). This has also spawned the phenomenon of foil-covered “chocolate gelt.”

What It Means For You

Noting that one should spend time in close proximity to the Chanukah lights, the Previous Rebbe would say, “We must listen carefully to what the candles are saying.” So what are the flickering flames telling us? Here are some messages:

a. Never be afraid to stand up for what’s right. Judah Maccabee and his band faced daunting odds, but that didn’t stop them. With a prayer on their lips and faith in their heart, they entered the battle of their lives—and won. We can do the same.

b. Always increase in matters of goodness and Torah-observance. Sure, a single flame was good enough for yesterday, but today needs to be even better.

c. A little light goes a long way. The Chanukah candles are lit when dusk is falling. Perched in the doorway, they serve as a beacon for the darkening streets. No matter how dark it is outside, a candle of G‑dly goodness can transform the darkness itself into light.

d. Take it to the streets. Chanukah is unique in that its primary mitzvah is observed in public. It’s not enough to be a Jew at heart, or even at home. Chanukah teaches us to shine outwards into our surroundings with the G‑dly glow of mitzvahs.

e. Don't be ashamed to perform mitzvahs, even if you will feel different. Rather, be like a menorah, proudly proclaiming its radiant uniqueness for all to see.