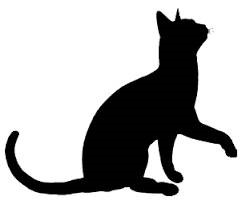 This feline is more than just a Halloween symbol according to thesprucepets.com

Whether you are a cat owner or not, we can all agree that no other domesticated cat has a rap quite like black cats.

While black cats are typically associated with Halloween, witchcraft, and bad luck, there’s much more to these fur balls than the creepy stuff. Learn the history of black cats and how they became Halloween icons, where they are considered a symbol of good fortune, and how their genes may, one day, help prevent certain diseases in humans.

The Background of Black Cats and Witches

Black cats are quintessential Halloween icons—and the number one costume choice for both elementary-aged children and women in their freshman year of college, oddly enough—but do you know how they got such a spooky rap?

Beginning in the Middle Ages, black cats became associated with Satan, witches, and witchcraft; some people went so far as to believe that black cats were cohorts to witches or even witches who had taken on another form. This wide-spread superstition resulted in the horrific mass killing of black cats—and sometimes even their owners.

Aside from continuing to represent all things eerie, the fear of black cats still has some influence today. Many animal shelters won’t place black cats in homes during the month of October for fear of them being used sacrificially.

Forget the stereotypical depiction of the perpetually single cat lady. In some parts of the world, it’s believed that black cats can actually improve your love life.

In Japan, for example, single women who own black cats are believed to attract more suitors. In Great Britain’s English Midlands, a black cat is the ideal wedding gift; they’re believed to bring good luck and happiness to the bride.

Black Cats Can Bring You Luck

Not only can black cats better your love life, but they can amp up your good luck and improve your finances, too. Historically, sailors brought cats aboard ships to hunt mice—and, presumably, for companionship—but British sailors believed a black cat would bring the ship good luck and ensure a safe return home.

For those of us not in a maritime profession, a black cat arriving at your doorstep signals prosperity (a common belief in Scotland) and a black cat crossing your path signals good luck (in England and Ireland).

Researchers at the National Institutes of Health discovered that the genetic mutations that cause cats to have black coats may offer them some protection from diseases. In fact, the mutations affect the same genes that offer HIV resistance to humans.

Since cats can experience many of the same health issues as we do—cancer, HIV and Alzheimer’s, to name a few—they make perfect models for studying human disease. By figuring out how cats have evolved to resist diseases, researchers can, potentially, learn how to prevent disease in humans as well.

If your black cat has a tabby stripe gene and loves to spend his days lounging in the sun, his fur can turn a rusty brown color. Why? The sun’s rays break down the pigment in their fur to reveal the underlying tabby stripes.

If you are getting a black kitten or adult cat, naming your cat can be tons of fun since the color black has a multitude of synonyms or references associated with it. For example, you can go down the road of the dark arts and mysticism. Or, simply think of black items in nature or your life that your cat reminds you of. Take a look at some of the best names for black cats and gather inspiration for a name for your new feline friend.

Depending on the culture, black cats are an omen for good luck or bad luck. In the U.S. and a majority of western European countries, a black cat crossing your path is considered a harbinger of bad things. However, in the United Kingdom and Japan, the superstition is quite the opposite, a black cat is a good omen. Even the direction that a cat walks can have significance. Pirates of the 18th century believed that a black cat walking towards someone would bring that person bad luck. If a black cat walks away from someone, then that person will have good luck.

Tips for Naming Your Cat

When thinking of a name for your cat, make sure you pick something that has lasting power. Cats can live up to 16 years and sometimes longer. Also, choose something you feel comfortable sharing with your friends, family, and veterinarian's office. Besides its physical characteristics, you can also derive cat names from observing your cat's overall behavior and quirky mannerisms, or select a pop culture reference.

Similar to female cats, most masculine black names reflect heroes or villains dressed in black, or figures that use the cover of night to do their business.

Since the time of the Salem witch trials of the 1600s, the Plymouth Rock Pilgrims viewed the black cat as a witch's companion, demonic, and related to sorcery. This dark history carries on in names for black cats today.

When people give names to pets, they often associate items from nature or objects in their lives that remind them of their pet. This list pulls potential name ideas from darkly hued objects.