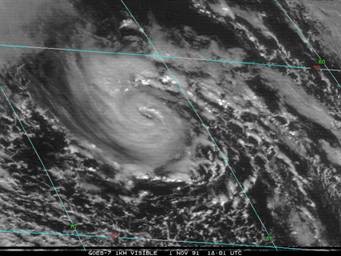 Halloween storm of the century 1991 - NOAA.gov

The Perfect Storm was a rare monster storm with an unnamed hurricane in the center of the tempest according to thoughtco.com. The "perfect storm" was a nickname given to this storm by Bob Case, a retired NOAA meteorologist. The storm began as an extra-tropical low on October 28, 1991 and became famous as author Sebastian Junger profiled the sinking of the sword-fishing boat the Andrea Gail in the novel The Perfect Storm. The storm would eventually produce 100-foot rogue waves.

In October, most of the United States moves towards the cold winter months as the country slowly cools down from the summer heat. Ocean water has a high heat capacity meaning the land masses of North America cool at a more rapid rate than the ocean waters. The heat retained in the Atlantic will often create massive storms in the still-warm waters. Because air masses retain the characteristics of their source, the continental air masses from the cooler land will often meet the maritime air masses of the warmer ocean creating large storms known as a Nor'easter.

Forecasters had a rough time forecasting this Halloween storm. The storm happened when a high-pressure system, a low-pressure system, and the remnants from Hurricane Grace collided in a trilogy of terror. The resulting waves and high winds hit many parts of the Eastern United States causing the famed sinking of the Andrea Gail and the death of her six passengers. An interesting aspect of the huge system was its retrograde motion (east to west)—not away from the New England Coast, but toward it. Even while New Englanders were enjoying clear bright blue October weather, forecasters were warning of this immense storm.

According to Bob Case, the set of meteorological circumstances leading to the storm happen only every 50-100 years. Much like the Fujiwhara Effect, several weather events did a strange meteorological dance around each other. Storm damage hit as far south as North Carolina, Florida, and the Northern coast of Puerto Rico. The storm caused millions of dollars in damages to beaches and homes, including the seaside Kennebunkport, Maine home of former President George Bush.

A remarkable event occurred when a hurricane formed inside the Halloween Nor'easter. Wind speeds topped 80 mph inside of the intense Halloween storm, making the storm of hurricane strength on the Saffir-Simposon Scale. This particular hurricane was never named as most tropical cyclones are named according to a pre-set list of hurricane names. Instead, it would become known as the Unnamed Hurricane of 1991. The storm finally broke up over Nova Scotia, Canada, on November 2, 1991, and remains only the 8th hurricane never to be named since the naming practice began in the 1950s.

Why Wasn't the Hurricane Named?

There is a difference between the Halloween Storm of 1991 and the hurricane that formed inside the storm. At the time of the storm, emergency officials and the media were scrambling to get more information on the storm damages as well as any forecasts for future problems. It was decided that the hurricane would be short-lived and should remain unnamed so as not to confuse people.

Many locations up and down the Atlantic coast saw tide, flood, and storm surge records broken. In Ocean City, Maryland, a record high tide of 7.8 feet occurred beating the old record of 7.5 feet recorded during a March 1962 storm. Damages in Massachusetts topped $100 million dollars. Other specific facts are available from the National Climatic Data Center Damage Summary for the Perfect Storm.

Causes of the Storm of the Century

1. Hurricane Grace - On October 27, 1991, Hurricane Grace formed off the coast of Florida. As Grace moved north on October 29, an extra-tropical cyclone formed over Canada. The counterclockwise motion of this low-pressure zone left a trailing cold front over much of the Northern Atlantic coast. The cold front would later catch up with the dying hurricane. Grace would later make the retrograde turn to the east in response.

3. A High-Pressure System - A strong high-pressure center extended from the Gulf of Mexico northeastward along the Appalachians into Greenland. Strong winds were generated from the tight pressure gradient between a strong high high-pressure in eastern Canada (1043 mb) and the surface low.