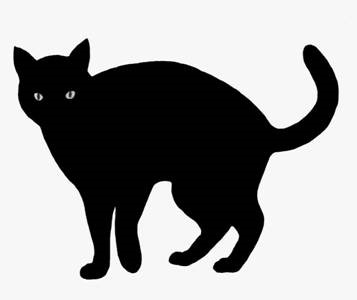 What Is National Black Cat Day?

It’s National Black Cat Day on October 27th according to nationalday.com! Black cats need a little positive PR as their reputation as an omen of bad luck is well-known (and unearned, frankly). In the lead-up to Halloween, National Black Cat Day provides the chance for feline fans to show off their love for the oft-maligned, but always iconic animal.

The black cat carries a unique status among the wide batch of different cat breeds. In some locales, notably Scotland, Britain, and Japan, the presence or appearance of a black cat is indicative of imminent good fortune and prosperity. Beyond these regions, though, public favor of the black cat runs sharply southward. In much of the Western world, black cats are considered to be harbingers of misfortune and wickedness. This unfortunate association stems from an image that will be familiar to many readers, which is that of the black cat serving as a companion to potion-brewing, spell-casting witches everywhere.

This relationship would prove to hold severe consequences for owners of black cats in America in the early 17th century. As the Pilgrims established their occupancy on the east coast of the country, they maintained a strict suspicion of anything remotely tied to the perils of witchcraft. The black cat served a symbol of the supposed evils and Satanic sympathies of witches, and as a result, those found harboring black cats would receive harsh punishments; some would even be sentenced to death.

While, in general, the fears surrounding the demonic potential of witches has subsided significantly, the black cat will be left wondering why it still must suffer the consequences of a damaged collective reputation. According to several animal-advocacy groups and adoption agencies, black cats experience lower rates of adoption and higher rates of euthanization relative to other cat breeds. Because of this, National Black Cat Day stands as a fantastic opportunity to subvert these trends and demonstrate appreciation for an animal that could itself use a little luck.

October 16 is National Feral Cat Day, so start practicing your alley cat strut and get your feline friends together. This is a day to celebrate cats of all stripes, no matter where they call home. Feral cats have been stigmatized the world over, but thanks to this holiday, we can change how we see these lovable nomads.

National Take Your Cat to the Vet Day

This day serves as a great reminder of the responsibility we have to the pets we care about so much! Even if it’s a hassle to get them there, it’s important to remember that our cats’ health is something that only we have control over. Make sure they get their check-up so that they have the energy to love you back just as much as you love them!

Global Cat Day, which takes place October 16, reminds us that educating, engaging, and empowering people to defend and protect cats is the right thing to do. They say dogs are man’s best friend. Perhaps, but it’s very likely cats are tied for first place in the informal and unscientific “Best Friend” category.

The black cat Gladstone achieves the position of Chief Mouser to the Treasury in the United Kingdom.

Since the 1880s, the color black has been associated with anarchism, and the black cat in alert, fighting stance was later adopted as an anarchist symbol

Poe published his story "The Black Cat"in 1843, about a murderer carefully concealing a crime, but eventually breaking down and revealing himself because of a nagging reminder of his guilt.

It is if it’s October 27th! Show some love to black cats everywhere in the lead-up to Halloween, which is only four days after!

Are black cats less likely to be adopted?

What should I name my black cat?

Whatever you think is best! There are plenty of directions to head in. You can choose to be straightforward (Blackie), ironic (Snowflake), or referential (Felix), among other options!

What breed are black cats?

Black cats can come from many different breeds! According to the Cat Fanciers’ Association, there are as many as 22 recognized breeds of cat that may have a solid, black coat of fur.

Show Off Your Black Cat on Social Media

If you already keep a black cat as a pet, today is the day to celebrate it on social media. We’re sure you never post photos of it on any other day, right? Show it off, drawing particular attention to its fur color, and hashtag it with a reference to National Black Cat Day!

Some of the most famous cats in popular culture are black cats! Watch a TV show or movie that embraces the black cat. Examples include Salem from "Sabrina the Teenage Witch," Sylvester from “Looney Tunes,” and Snowball from “The Simpsons.”

If you've been thinking about adopting a cat, then National Black Cat Day is a great day to head to your local animal shelter and bring home a new dark-furred friend!

Black Can Be Lucky, Too

The myth that black cats bring bad luck persists, but we’d like to consider the fact that the opposite may hold true, too. As mentioned before, in some parts of the world, coming across or owning a black cat is just as likely to bring you good fortune. Why not focus on the positives?

Cat fur proves to be a nuisance in homes everywhere. That said, if you happen to own darker furniture, then a black cat’s fur won’t show up on it! Just one consideration that can be factored into your decision of what kind of cat to adopt next…

Forgetting all their cultural ties, black cats are still just as cute as any other cat! If anything, their dark fur brings greater attention to the color in their eyes, which are often a rich gold due to their higher melanin content.