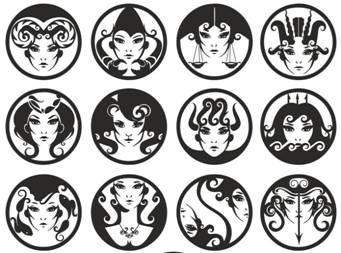 
This is a fairly good guide to figuring out someone's Zodiac sign or Ascendant according to elsaelsa.com

Aries/Aries rising tend to have some kind of V-shaped trait, whether it's in the hairline (widow's peak), or eyebrows that arch high or even a nose that points down a little. Many of them have cute, almost perfect ears. Moon in Aries people always seem like they'd rather be somewhere else - always eager to do the next thing.

Taurus/Taurus rising tend to have a prominent throat/neck, round chin, and potato-like face in the sense that they have chunky cheeks and chin. (Think Jessica Alba) Personality-wise, they're sweet in nature but stubborn as all get out... as cliche as that may sound.

Geminis/ Gemini rising tend to have long arms and cute apple shaped heads and high cheek bones with the Air sign square jaw most of the time. Geminis are also a bit androgynous appearing, as with all air signs. They move fast too, a dead giveaway for this sign! Gemini influence tends to give low eyebrows with squared arches.

Cancer/Cancer rising is a tough one. For some reason, the rising sign tends to dominate the physical traits over the cancer sun sign. For example, Dave Chappelle and Lindsay Lohan are both Cancers but their body types and head shapes are so totally different. The same is true about other signs, but with this one it's even more true. The only trait that is almost always present is not physical, and it's their affinity for food and making people laugh. But be careful because Sagittarians also love to make folks laugh but the main difference is they usually laugh more themselves.

Leos/Leo rising tend to have the archetypal proportions in every way. (think Mary Louise Parker, Jennifer Lopez, Barack Obama) Their head shape is "perfect", not usually round like some sources might claim, although the rising sign could change that dramatically. Think cookie-cutter proportions - Barbie, Ken.. you know? Especially Leo Risings (Justin Timberlake) even though he's an Aquarius, his forehead was saved by his Leo rising.

Virgo/Virgo rising tend to have very oval faces with narrow foreheads. although a few Virgos with a different rising sign don't have this trait - they still have that classic Virgo pointy chin.

Libra/Libra rising and its influence in the chart (whether sun or moon usually) makes one look young for their age, especially Libra Rising. They have cheeks you'd love to pinch. A triple Libra, (moon, sun and rising) would have the typical Libra cheeks - dimples and all. They dont typically puff out naturally like Taurus, but when they smile you can the effect. Unlike Gemini, they don't have high cheekbones but their rising sign could change that. Because they're an air sign, they probably have a somewhat square jaw too and can be a bit androgynous in appearance.

Scorpio/Scorpio risings are BY FAR the easiest to spot. Their physical traits are unmistakable - usually a low hairline/ somewhat small forehead, deeply intense eyes and smaller upper body than lower. Women with heavy Scorpio in their chart tend to have small chests and both male/female have very full legs, especially the lower legs. There is sometimes an overbite or bone structure that makes the jaw look small

Sagittarius/Sagittarius rising tend to have longer faces, but in a good looking way! If you can't tell by their face or head, you can spot a Sag or Sag-rising by the extra weight they tend to carry, but again, the rising sign plays a huge role so it varies on how much Sag they have in their chart. Sag Risings almost always have thicker, well developed thighs.

Capricorn/Capricorn rising tends to seriousness. It seems cliche and every astrology description says this, but it's true. It does fade with age though - young Cappies being the easiest to spot because they seem like adults, at least emotionally. Cap Risings tend to be pretty bony and usually have a petite torso. Capricorns also tend to have prominent noses with the face a little on the long side, but not always. The nose and the brows seem to for a "T".  There is also a physical youthfulness similar to Libra that accompanies the Capricorn influence - the only difference is that Caps look younger as they get older whereas Libras always look young for their age.

Aquarius/Aquarius rising tend to have wide foreheads and square jaws. They almost always have something unusual going on with their ankles and feet. There's also an unmistakable androgyny in both male and female Aquarians.

Pisces/Pisces rising says its always the eyes. If they're not big and dreamy, they're a bit oriental looking, but still dreamy. They almost always have striking eyes, not as intense as Scorpio eyes, but very noticeable.