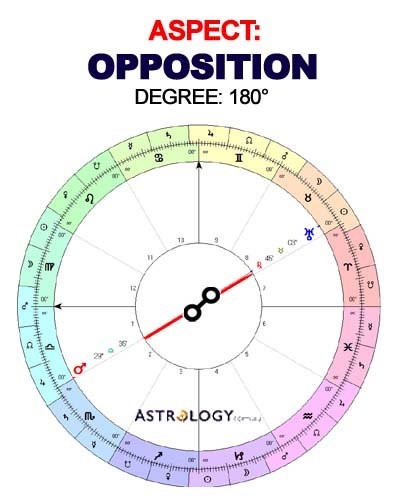 Image: Depiction of an opposition - astrology.com


In an article from planetwaves.com we find that there are a few ways to think of oppositions.

When you think opposition, think Full Moon. Something has come to the peak of its cycle. It is a face-to-face relationship; full on; full polarity. The Full Moon is a LOT of energy. People go a little loony (which means moony). Full Moons have a way of breaking a deadlock; something gives. They are often the maximum point of tension right before things are resolved. If you want to learn the energy of an opposition in your body, feel your way through the next few Full Moons.

Let's consider the chart structurally. Most of the time, oppositions are planets arranged in opposite signs. [This is always true of the Full Moon. There are times when other oppositions are close to the edge of a sign, creating a situation where one side of the opposition is what's called 'out of sign'. But let's skip that for now; it's a special case and we will need an example chart, which I don't have at the moment.]

When two opposite signs are involved, a polarity of the zodiac is involved. You can think of the horoscope as having 12 signs, or six pairs of signs. When one pair is activated (such as Gemini-Sagittarius), there's going to be the attempt to use the aspect to work with both sides of the process of that polarity. Opposite signs are an arrangement that says 'the same thing in different ways'.

Another keyword for opposite is integration. The point of all these opposite pairs of signs is integrating seeming oppositions. It is like getting the left brain and the right brain to work together.

Note that there are several sets of astrological factors that always work in opposition, and if you study them, you can get some sense of the nature of this aspect: the lunar nodes are always in opposite signs; as are the ascendant and the descendent; and the MC and the IC.

One last clue. When dealing with oppositions, look at the ruling planets of the signs involved. Where are they? Let's say you've got one side of an opposition in Cancer and the other side in Capricorn. What is the relationship between the Moon and Saturn? That relationship will help you understand how the person works with the opposition.