The History of the Court Jester 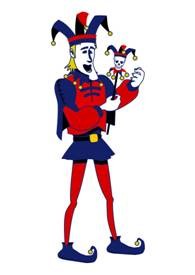 “Who Is Not a Fool?” Horace, Satires - clipartpanda.com

The court jester is a universal character according to blo.org. He can be found in ancient Rome and in China, in Renaissance Europe and in czarist Russia, at the courts of the Middle East and in classical Sanskrit plays of ancient India. Although there were a few known female jesters, historical studies show that the majority of jesters were men. The most famous female court jesters were Astaude du Puy, who worked for Queen Henrietta Maria (1609–1669), wife of Charles I of France, and La Jardiničre, who worked for the queen dowager, Catherine de Médicis.

Throughout history, the best jesters would acquire legendary reputations, becoming celebrated for their sharp tongues and quick wit. Their role was more than pure amusement; they were the original “truth tellers,” whose job was to mock typical human vices of vanity, venality, snobbery, petulance, laziness, carpetbaggery, and fatuity. The court jesters aimed their humor at the usual targets: religion and the hypocrisy of its authority figures; pompous and self-serving scholars and grandiloquent artists; knavish and sycophantic court officials; and indolent, mercurial, or incompetent rulers. In Europe, the court jester would be called fool, buffoon, clown, jongleur, jogleor, joculator, stultor, scurra, fou, histrio, morion, among many other names. He was an essential fixture of the royal courts and master castles.

The typical medieval or Renaissance jester was an outsider shunned by society for one reason or another. His marginal position put him outside the social framework, but his alienation only sharpened his insight into human nature. Jesters came from a range of backgrounds, from nonconformist university dropouts to excommunicated monks. In Russia, for example, jesters “were generally selected from among the older and uglier of the serf-servants, and the older the fool or she-fool was, the droller they were supposed and expected to be. The fool had the right to sit at table with his master, and say whatever came into his head” (Otto, 1–2).

Giving offense to the king, lčse-majesté, has been a grave crime throughout history, and it was severely punished, including with death. Court jesters, however, often were granted “comic dispensation,” a “Freedom from all Constraint.” They could say anything about anyone, including the king. The jester kept the master in check, giving him an honest assessment of his decisions, character, and actions. Sometimes jesters and their masters developed a strong bond and became very protective of each other. Complimenting the fool was seen as complimenting the master. In 1047, a jester named Gollet warned his master, Duke William of Normandy, of a plot. He did so in rhyme, while pounding on the duke’s door.

King Charles V of France buried his two jesters in lavish monuments to pay homage to their wisdom and wit (Doran, 291). Shakespeare’s most iconic scene is that of Hamlet holding the skull of Yorick, his beloved childhood jester, while lamenting his untimely death: “Alas, Poor Yorick! I knew him, Horatio: a fellow of infinite jest, of most excellent fancy.”

The jester was often represented as the only wise man of the company. Like Feste in Shakespeare’s Twelfth Night, he frequently spoke in improvised rhymes and sophisticated riddles, ensuring that the true meaning of his words remained obscure and beyond the understanding of common folk. The revered Polish jester Stańczyk (1480–1560), for example, was considered the most politically astute man of his era, able to predict the unfavorable turn of Polish history.

Employed by three kings, Alexander, Sigmund the Old, and Sigmund Augustus, Stańczyk is known as a highly intelligent political philosopher who often spoke truth to power. In the most famous portrait of Stańczyk, by Jan Matejko, the jester, his head hanging low, is the only person at the court concerned about the news of Russians capturing the city of Smolensk in 1514. In Polish literature, Stańczyk is often perceived as the symbolic conscience of the nation. For the jester, however, no matter how exceptional and talented he was, the price of the freedom to say anything was social exclusion.

The jester could never be promoted and could never fully participate in the social life of the court. He remained on the margins, an astute observer and biting commenter on social conventions and human follies. Likewise, a court jester was a slave who could never break free of his job; only the royal word could release him.

Many of the jesters were disabled: hunchbacks like Rigoletto, dwarfs, or otherwise handicapped. Since they were ostracized by society, the disabled marginal position offered them an unparalleled vantage point from which to peer into its faults and the necessary detachment from life’s passions, a vital quality in a brilliant jester. In medieval and Renaissance Europe dwarf jesters were so popular that the practice of artificially stunting children became common to keep up with demand.

According to documents from 1670, dwarfs could be artificially made by “anointing babies’ spines with the grease of bats, moles, and dormice.” Other prescriptions advised various medicaments such as “the aptly named dwarf elder, knotgrass, and daisy juice and roots mixed with milk to stunt growth” (Otto, 29). Often children were kidnapped and turned into “artificial dwarfs” to be sold as court jesters. In Italy and Spain the practice was so widespread that the kidnappers had their own term, comprachicos, “child-buyers.” In Shakespeare’s A Midsummer Night’s Dream (1600), Lysander talks about it: “Get you gone, you dwarf; / You minimus, of hindering knot-grass made; / You bead, you accorn!” The Hindu book of dramaturgy, Natyasastra, advises that the best court jesters should be both dwarfs and hunchbacked.

The desire to keep dwarfs and other “freaks” at the courts was almost universally viewed as a way to contain their magical capacity for evil, “an instinctive fear and distaste developing into the need both to control and appease. It did not stem from a recognition of their humanity” (Whitehead). It was believed that the touch of a dwarf could cure and fend off illness. Likewise, “the stinging wit of the jester belongs to the same family of beliefs: his bitter medicine could purge ill humour, his sharp points could draw out bad blood” (Whitehead).

Although the majority of court jesters were picked for their intelligence and quick wit, some who were developmentally challenged, with Down syndrome or autism, were used for amusement, as their antics were considered a great source of entertainment. Since they could not control their impulses they were considered truth-tellers, contributing to the later perception of madness as a source of truth. In Madnessand Civilization (1988), the French philosopher Michel Foucault notes that madness was historically thought to “bring to light the real problem, which can then be truly resolved” (33).

Standing outside of the ethical and hierarchical order of the court, the mentally challenged jesters represented a purging of social consciousness. They were given leeway to point out the follies of the social and political structures. Representing the mad as truth-bearers was also part of theatrical convention, as Guilfoyle (1980) notes: “Characters who go mad in renaissance drama frequently speak more truth, and deeper truth than when sane” (6). Disabled court jesters served an important function: “to correct over-evaluation, [and to call] for a revaluation of values” (Feibleman, 421–32).

Like many other historical court jesters, Verdi’s Rigoletto is hunchbacked. Since his job is to mock everyone at the court for the amusement of the Duke, he is not well liked by the courtiers. The figure of Rigoletto is based on the real-life jester Triboulet (1479–1536), who suffered from microcephaly, a neuro-developmental disorder, and who served kings Louis XII and Francis I of France. He was deformed in appearance: “His bowed back, his short and twisted legs, his long and hanging arms, amused the ladies, who contemplated him as if he had been a monkey or a paroquet” (Doran, 305).

According to legend, Triboulet was not well liked at court, and he was often physically abused. When he complained to King Francis I of a nobleman who had threatened to beat him to death, the king replied, “If he does, I will hang him a quarter of an hour afterward.” “Ah, Sir!”—responded Triboulet—“couldn’t you contrive to hang him a quarter of an hour previously?” When he was about to be beaten by a group of pages for insulting them, Triboulet also responded in rhyme. It didn’t save him, though, and eventually he was beaten. He recovered soon enough to become one of France’s most celebrated jesters.

Triboulet made his first literary appearance in François Rabelais’s Pantagruelian chronicles. In Victor Hugo’s 1832 play Le Roi s’Amuse (The King Amuses Himself), on which Verdi’s Rigoletto is based, Triboulet is malicious and mean-spirited. He spares no one and is equally cruel to each courtier who comes his way. Rejected by the world, he shows genuine emotions only toward his lone and pure daughter. In writing the play, Hugo included some elements from his famous novel The Hunchback of Notre Dame, published in 1831, modeling his Triboulet on Quasimodo, the title character of the novel. Hugo described Quasimodo as a tortured and abused man who “found around him only hatred.” Eventually, in response to the world’s malice, “he adopted it. He armed himself with the weapons that had wounded him.”

Upon reading Hugo’s Le Roi s’Amuse, Verdi wrote in a letter to a friend that the story “is the greatest subject and perhaps the greatest drama of modern times. Triboulet is a creation worthy of Shakespeare!”  He “is one of the greatest creations that the theatre of all countries and all times can boast.” At that time, Verdi considered composing music for Shakespeare’s King Lear, but upon reading Hugo’s play he abandoned the project, believing that the character Triboulet had even greater dramatic potential as a blinded and grieving father. Thus, drawing on all these influences, Verdi’s Rigoletto is a composite of four characters: the real-life Triboulet, the Triboulet from Hugo’s play Le Roi s’Amuse, Quasimodo, and King Lear. Likewise, Rigoletto’s name was initially Triboletto, but eventually it became a blend of two words, “Triboulet” and the French rigoler (to laugh).