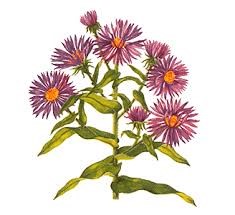 The September flower is the Aster.

According to “What’s My Birthflower?” this fall-blooming herb with daisy-like flowers is also called the September flower and is said to symbolize love, faith, wisdom and colour, which blooms in pink, red, white, lilac and mauve.

All of these varieties will be yellow in the centre and although the flower resembles a daisy it is in actual fact a relative of the sunflower.

This flower has also been known as Michaelmas Daisy, starwort and frost flowers and was at one time thought of as a love charm.

The Greek word for ‘star’ is how this plant was named, as the shape of the flower head resembles one.

The word aster, when used as the root of another word, refers back to the Greek connection. For example, the word asterisk, which is a punctuation mark resembling a tiny star shape, actually translates to mean ‘little star.’

The word disaster describes the result of a bad situation or, an event that was ‘ill-starred.’

The aster was used in ancient times for medicinal purposes.

The name ‘Michaelmas daisy’ makes reference to the blooming of the flower, which occurs at the same time as the feast of St. Michael. It is because of this that Michaelmus became known as the date of beginnings.

A Greek legend tells the tale of Astraea, the goddess of innocence, who went to live in the heavens as the constellation Virgo. A flood covered earth, created by Zeus to wipe the planet clean of corruptness. Two humans survived on Mt. Parnassus , which the flood did not reach. Astraea created starlight to guide the pair and as she wept from pity she had for them, her tears landed on earth. From those locations asters grew.

Asters were said to also symbolize the yearning for an end to battle when they were placed on the graves of French soldiers and to others the aster speaks of elegance and refinement.

Folklore also states that the perfume generated from burning aster leaves was able to keep evil serpents at bay. They were also believed to bring luck and one legend points to the aster as being able to foretell a change in weather. When the petals are closed, it is a signal of oncoming rain.

Another myth involves magical fairies who were thought to sleep under the aster petals after they close at sunset and as the plant was ruled by Venus, it was a common ingredient used in love potions and referred to as the ‘herb of Venus.’

There are hundreds of species of aster and the Monte Casino is considered the most popular.

The aster is also the flower used to celebrate a 20th wedding anniversary.

The hidden message “Take Care Of Yourself For Me” is what is being sent with a gift of asters.