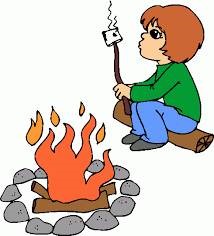 There is nothing better around a campfire than ooey gooey toasted marshmallows — which is probably why today is celebrated as National Toasted Marshmallow Day according to www.cbc.ca! Marshmallows were first created in Ancient Egypt, when people mixed sap and honey together for a sticky treat. Back then, they were considered so special that only kings and other noble people were even allowed to eat them! Today marshmallows are enjoyed by everyone, so here’s some yummy facts to celebrate the day with.

Shouldn’t they be called ‘sugar puffs of deliciousness’ or something like that? Well, marshmallows were originally flavoured by using the root of the mallow flower, which grows in a marsh — and so the name was born! Interestingly, the mallow root was also used to treat sore throats back then, so the next time you’re sick, try asking your doctor if you can have marshmallows.

Are you afraid of marshmallows?

The word althaiophobia (say "al-tha-eye-oh-FOH-bee-ah") is the fear of marshmallows. That means you're afraid of s'mores, cocoa with marshmallows, rice krispie treats, even bags of mini marshmallows! Do you know anyone with althaiophobia? Didn’t think so.

Probably the most famous marshmallow treat is the ‘s’more’, which is actually short for ‘some more.’ You make s’mores by creating a sandwich of toasted marshmallow, chocolate, and graham crackers. No one knows who made the first s’more, although the Girl Scouts of America are the ones who published the first official recipe for them back in 1927. Thanks Girl Guides!

It seems that some of them do! The people who feed the animals at SeaWorld in Florida usually feed them healthy foods like fruits and vegetables, but will occasionally give the polar bears marshmallows as a tasty treat! Wonder if they toast them first?

There are a lot of weird facts about marshmallows, but the strangest might be the Guinness World Record for “farthest marshmallow nose-blow.” Yes, you read that right. Apparently this odd feat was done by having one person blow a marshmallow out of their nostril 5.46 metres to another person, who caught it in their mouth. Yuck!