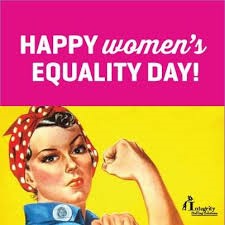 The right to vote, the cornerstone of democracy, belongs to all citizens — but this wasn’t always the case. Until recently, most countries denied voting rights to half of their population: women.

To claim their voice, women began agitating for the right to vote in the early 19th century. In the U.S., decisions about who could vote were left up to the states. The 19th Amendment, ratified in 1920, ensures voting rights for everyone regardless of gender.

Today, Women’s Equality Day celebrates the achievements of women’s rights activists and reminds us of the unique daily struggles that women face.

Women’s Equality Day, celebrated every August 26, commemorates the passage of women’s suffrage in the U.S. and reminds us of the hurdles overcome by the heroic women who faced violence and discrimination to propel the women’s movement forward.

In the early 19th century, American women, who generally couldn’t inherit property and made half of a man’s wages in any available jobs, began organizing to demand political rights and representation.

By the early 1900s, several countries including Finland, New Zealand, and the United Kingdom had legalized voting for women as the movement continued to sweep across the world. In the U.S., the 19th Amendment to the Constitution was first introduced in 1878, but it failed to gain traction. It wasn’t until women’s involvement in the World War I effort made their contributions painfully obvious that women’s suffrage finally gained enough support. Women’s rights groups pointed out the hypocrisy of fighting for democracy in Europe while denying it to half of American citizens at home.

Because a Constitutional amendment requires approval from two-thirds of the states, 36 of them had to ratify the 19th before its passage. The deciding vote in the Tennessee legislature came from Harry T. Burn, a young state representative whose mother’s plea to support the amendment became a deciding factor in his vote (which he switched at the last minute).

To remind us of the struggles of the past, present, and future, Congress designated August 26 as Women’s Equality Day in 1971.

July 19-20, 1848
Seneca Falls Convention
The first women's rights convention organized by women, including suffragists Elizabeth Cady Stanton and Lucretia Mott, was held at Seneca Falls, New York. The meeting of over 300 activists sparked the movement that led to the passage of the 19th Amendment.

Thank the women in your life
We all depend on hardworking women — moms, grandmas, partners, sisters, and friends. Take some time today to thank them for all the physical and emotional labor they do for others!

Support women-owned companies
Use your consumer power to support female entrepreneurs. You can find lists of women-owned businesses on the Small Business Administration’s website or by reaching out to your local chamber of commerce.

Register to vote
Women and their allies fought for decades to win the right to vote. Do your part to honor their sacrifices by making sure you’re registered to vote in your community.

5 Fascinating Facts About Women In The Military

Women in combat
Women have long played important non-combat roles in the U.S. military in medical and operational positions, but combat positions were only opened to women in 2013.

There is only one female Medal of Honor recipient
Dr. Mary Edwards Walker, a contract surgeon for the Union, spent time as a Confederate POW and was awarded a Medal of Honor for her efforts. To date, she is still the only female recipient of the military's highest award.

Military maternity wear
Women weren't always allowed to continue serving if they became pregnant. Today, all branches of the military offer maternity uniforms for service members who are expecting.

Why We Love Women’s Equality Day

It gives us an opportunity to learn
Take some time on Women’s Equality Day to brush up on your women’s history and learn about the complicated and fascinating history of women’s rights in the U.S. and internationally.

It reminds us to show gratitude
It’s not always easy to remember to thank those who do so much for us. Use Women’s Equality Day as a reminder to do something meaningful for the important women in your life.

It reminds us of how far we have to go
Despite many advances in the last century and a half, women in the U.S. and around the world still face professional obstacles, domestic violence, and other barriers to their well-being and success.