The Origin of Some Common Superstitions 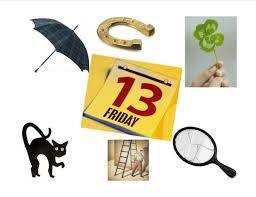 Why you shouldn't you walk under a ladder or is a black cat really a creature to avoid? Here is a list of the top common superstitions that are still part of our culture, and where they came from.

Most of us probably don't even know why we give a little shudder when we see Friday the 13th looming on the calendar, or why we say "bless you" when someone sneezes. These and other common superstitions come with a colorful history or story that may date back centuries.

Common superstitions can be described as beliefs that have no rational basis.

Some superstitions may be just for fun, while others may affect you deeply enough to affect your choices in life. None is based in fact, but many have roots deep in tradition and history.

Many of us can't help but get a shiver of trepidation when we realize that a Friday the 13th is coming up within the current month. A fear of the number 13 is one of the most common superstitions around, and is so widespread that many apartments and hotels don't have a 13th floor and some airlines fly without a 13th row.

The most popular tale of the origin of this superstition is that Judas was the 13th guest at the Last Supper and Christ was crucified on a Friday.

Put it all together, and you have one unlucky day of the year.

There seem to be a lot of variations of this superstition, but the idea of having an itchy palm generally refers to someone who is greedy or has an insatiable desire for money.
In Shakespeare's Julius Caesar, Brutus states, "Let me tell you Cassius, you yourself are much condemned to have an itching palm."

Some believe that if the right palm itches, you will meet someone new, while an itchy left palm means that money is coming. Others say that an itchy right palm means money coming in and a left-handed itch says money going out. According to the superstition, if either of your palms itch, do not scratch either one unless you want to counter the effect.

The only way to scratch it without countering the effect is to rub it on something made of wood or brass.

3. Walking Under a Ladder – Bad Luck?

It's common sense to avoid walking under an open ladder for fear of something falling on you, but there are superstitious reasons for not doing so as well.

Consider the shape of an open ladder; a triangle that signifies life to some. When you walk though the triangle, you are supposedly tempting fate. You may also awaken spirits that live within the triangle (including evil spirits who may not be happy with the disturbance).

If you do accidentally walk under a ladder, you can counter the bad luck by placing your thumb between your index and middle finger. Another method is to cross the fingers on both hands to call upon the sign of the cross to protect you from evil.

4. Breaking a Mirror – How Many Years Bad Luck?
Most will tell you that the agreed upon time span for bad luck is 7 years. Seven years is also how long it takes to fully rejuvenate the entire physical body.

Since a mirror was thought to be a reflection of the soul, breaking a mirror was harmful to the soul. To counter the ill effects, you can take the mirror outside and bury it in the moonlight.

Some people believe that this is the luckiest of all symbols, especially if it is found with the open end pointing toward you.

If you find one of these gems, pick it up with your right hand, spit on one end, make a wish and toss it over your left shoulder, leaving it where it lands.

You can also place a horseshoe over the entrance of your home with the open end down to bring luck to the family living within.

Some traditions say that the number of nails left on the horseshoe will indicate how many years of good luck are to come.

It seems like a no-brainer that opening an umbrella inside can be bad luck, since it runs the risk of breaking valuable items and poking folks in the eye.

However, there are also common superstitions that prohibit this act as well.

Umbrellas that shade us from the deified sun are considered magical. When the umbrella is opened inside, and out of the way of sun's rays, it offends the sun god. It may even signify impending death or ill fortune for both the person who opened it and the people who live within the home.

7. Knock Twice on Wood – Can It Revers Bad Luck?

The origin of this common superstition dates back to a time when some cultures believed that gods lived in trees.  When one would ask for a favor from these gods, he would lightly touch the bark of the tree. To say thank you after the favor had been granted, he would knock lightly one more time.

This custom may have also originated with Christians who were offering thanks for good fortune with this gesture to Jesus Christ who died on a cross made from wood.

8. Tossing Spilled Salt over your Shoulder – Good Luck For You?

Salt has always been considered a valuable substance capable of purifying and warding off evil spirits.

By tossing spilled salt over your left shoulder, you are driving away the evil spirits lurking around you who mean to cause you misfortune.

This is a tough one for cat lovers to swallow, but in the Middle Ages it was thought that witches kept black cats as companions or familiars to help them in their witchy ways.  Some people even believed that these kitties could turn into witches or demons after 7 years.

Powerful men like Hitler and Napoleon Bonaparte were prepared to conquer nations, but terrified of a little black kitten!

You may think it is etiquette, pure and simple, but blessing someone after he or she sneezes is actually a common superstition.

In the 6th century, people were congratulated for sneezing because it was thought they were expelling evil spirits. Early Romans believed that a good sneeze could release your soul into the world, and a "bless you" would keep it safe.

When the plague hit Europe in 1665, the pope mandated that everyone should be blessed when they sneezed since they were probably going to die! The blessing was usually followed up with the sign of a cross for good measure.

Common superstitions still have a place in homes across the world today, and many of us enjoy finding out the reason behind the rituals to make sense of them. Whenever you toss the salt, knock on wood or bless someone when they sneeze, you are making the world a safer place from all the evil spirits lurking about. You never know when your simple action to counter bad luck will be just the thing to make your world and the people around you a bit safer and happier.

How Superstitious Are You?

Do you take great care with mirror glass? Would you never even dream of walking under a ladder? Well, aside from seeming eccentric in your avoidance of some pretty harmless things, you're also probably very superstitious. Though some people take certain age old beliefs as seriously as they do the law, there are varying degrees of superstition. And if it makes you feel better, you can rub your good luck charm before you leave the house tomorrow morning.