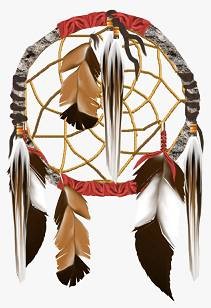 Originally created by American Indians, dream catchers today come in a variety of different sizes and styles. They usually consist of a small wooden hoop covered in a net or web of natural fibers, with meaningful sacred items like feathers and beads attached, hanging down from the bottom of the hoop. Real authentic, traditional dream catchers are handmade and crafted only from all natural materials, measuring just a few small inches across in size. The hoops are usually constructed of a bent Red Willow branch covered in stretched sinews. Wrapping the frame in leather is another common finishing touch for "real" dream catchers.

History of the Dream Catcher: Ojibwe or Lakota Origins?

Ancient legends about the history and origin of the dream catcher exist among several Native American tribes, but chiefly through the Ojibwe and Lakota nations. While many cultures find spiders to be creepy crawlers, the Ojibwe people found them to be a symbol of protection and comfort. According to the Ojibwa story, a mystical and maternal "Spider Woman" served as the spiritual protector for the tribe, especially for young children, kids and babies. As the Ojibwe people continued to grow and spread out across the land, The Spider Woman found it difficult to continue to protect and watch over all the members of the tribe as they migrated farther and farther away. This is why she created the first dream catcher. Following her example, mothers and grandmothers would recreate the maternal keepsake as a means of mystically protecting their children and families from afar.

What do dream catchers do? Purpose & Meaning of the Dream Catcher

Sometimes referred to as "Sacred Hoops," Ojibwe dream catchers were traditionally used as talismans to protect sleeping people, usually children, from bad dreams and nightmares. Native Americans believe that the night air is filled with dreams, both good and bad. When hung above the bed in a place where the morning sunlight can hit it, the dream catcher attracts and catches all sorts of dreams and thoughts into its webs. Good dreams pass through and gently slide down the feathers to comfort the sleeper below. Bad dreams, however, are caught up in its protective net and destroyed, burned up in the light of day.

All parts of the authentic Native American dream catcher have meaning tied to the natural world. The shape of the dream catcher is a circle because it represents the circle of life and how forces like the sun and moon travel each day and night across the sky. The dream catcher web catches the bad dreams during the night and dispose of them when the day comes. As for the good dreams, the feathers act as a fluffy, pillow-like ladder that allows them to gently descend upon the sleeping person undisturbed. There is some contention when it comes to the meaning of the beads that often decorate the dream catcher. According to some American Indians, the beads symbolize the spider—the web weaver itself. Others believe the beads symbolize the good dreams that could not pass through the web, immortalized in the form of sacred charms.